Music to Haunt By: House of Nightmares 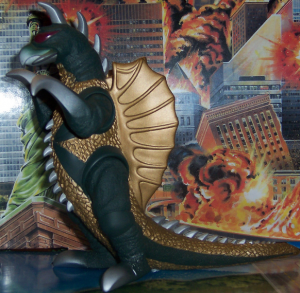 Hailing from Space Hunter Nebula M, the cyborg monster Gigan is one of the odder-looking members of Godzilla’s rogues gallery. With his massive hook-claws, visored eyes and chest-mounted buzzsaw, Gigan has made quite an impression on fandom since his first appearance in 1972. In recognition of this popular daikaiju, here’s a collection of interesting trivia ranging from basic facts to obscurities known by only the most hardcore of fans:

2. Despite what some might think, the name “Gigan” was not chosen due to its connection to the word “Gigantic.” Although it is true that the term “Gigan” has been applied to giant monsters before, Gigan’s name might actually be a play off the Japanese term for “artificial eye.”

3. Although Gigan is shown shooting a laser from his forehead in video games and the poster art for Godzilla vs. Gigan and Godzilla vs. Megalon, this power was never used in any of Gigan’s film appearances until 2004’s Godzilla: Final Wars. The reason for this is explained here.

4. While reading the third volume of The Illustrated Night Parade of A Hundred Demons by Toriyama Sekien, I noticed that the monster Waira has arms similar to Gigan’s. Could this have been part of the inspiration for Gigan’s design?

5. Gigan’s final appearance in the Shōwa era was in the 11th episode of Zone Fighter, where he fought both Godzilla and the titular Zone Fighter.

6. Speaking of Zone Fighter, Gigan gained the ability to generate explosions with his hooks in his appearance on the show.

7. Similarly, Gigan got new powers in Godzilla: Final Wars, such as being able to fire grappling cables and razor sharp discs. Over the course of the film, Gigan’s arms are replaced with giant chainsaws. Also, he is given jetpacks to aid in flight and a barbed tail.

8. Gigan was originally played by Kenpachiro Satsuma (aka Kengo Nakayama), who also played Hedorah and went on to play Godzilla in the Heisei Godzilla series. In his most recent appearance, Gigan was portrayed by Kazuhiro Yoshida. I can’t say this with any certainty about Mr. Yoshida’s experience, but I do know that Mr. Satsuma’s costume had heavy claws and feet made from solid resin.

10. In the 1980’s, an especially odd unlicensed Gigan toy was produced. This “Gigan” had eyes, two clawed digits on its hands and feet, a buzzsaw that started in the middle of its stomach and an odd color scheme. Someone even wrote in to G-Fan magazine about it, asking if it depicted how Gigan looked before he was converted into a cyborg! You can see it for yourself in here.

11. Those who are familiar with the Trendmasters Godzilla toyline from the 1990’s might recall that the picture of Gigan on the packaging looked much different than the actual toy. That’s because it was (allegedly) a picture of a Japanese model Trendmasters had purchased to aid in designing their Gigan toy.