The Case of the Haunted Hotel 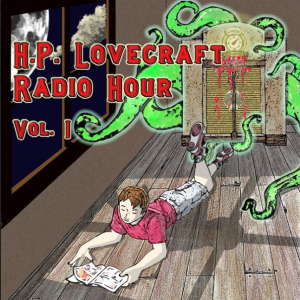 Founded in 2008, the goal of the H.P. Lovecraft Radio Hour is to spread awareness of Lovecraft’s works in audio form using a mix of adaptations and original comedy sketches (as a way of “eroding the grains of sanity you so hopelessly clutch”). The debut release, H.P. Lovecraft Radio Hour Volume 1, features the following Lovecraft stories from early in his career: “The Picture in the House,” “Dagon” and “Beyond the Wall of Sleep.” After a very humorous introduction warning us of the dangers of listening to the program, we soon hear the tale of a young man traveling rural New England by bicycle who is forced into an abandoned house by a storm. Once inside, he discovers the rare book Regnum Congo and is quickly repulsed by the graphic depictions of cannibalism within. However, he soon finds that he is not alone as he originally thought and his host’s eccentricities quickly grow more and more disturbing. Despite the name “C’thulhu and the R’lyeh Riders,” the comedy sketch is not a parody of western-themed radio dramas. Instead, it’s a broadcast from Miskatonic University, where Cthulhu and his rock band are being interviewed to promote their reunion album! “Dagon,” a prequel of sorts to Lovecraft’s The Shadow Over Innsmouth, tells the story of a merchant marine whose life was changed forever during the first World War. After escaping from his German captors at sea, he eventually drifted onto what he assumed to be a section of the ocean floor that had been brought to the surface by volcanic activity. The decay and strange monuments were bad enough, but what happened one fateful night made the horrors of war seem downright cheery. “The Iron Cauldron” is a comedy bit featuring a very familiar character sharing cooking tips and “Beyond the Wall of Sleep” deals with the recollections of a former asylum employee’s experience with a backwoods patient whose strange visions turned out to be more than mere madness.

Combining faithful adaptations with excellent performances and music, the H.P. Lovecraft Radio Hour has made an excellent first impression. Although only one actor (Ryan Haggerty) is used for the most part, his wide vocal range makes allows him to do so without it being obvious to the listener. This is aided in part due to the use of Lovecraft tales featuring a narrator recounting past events, which make for a hybrid of audio drama and audio book similar to Batman: The Stone King. I also enjoyed the clever use of audio effects. In addition to using them to accentuate the descriptions of the illustrations mentioned in “The Picture in the House,” there’s also an interesting instance of using them to represent one of Lovecraft’s infamous “italicized endings.” My only compliant involves the comedy sketches. While the introduction was hilarious and “C’thulhu and the R’lyeh Riders” was pretty amusing, “The Iron Cauldron” just didn’t work for me. I think the problem with writing Mythos-themed comedy is that the split second you mention a particular character, the audience almost always know what direction the rest of the sketch will go in. Your mileage may vary. That (very) minor issue aside, I highly recommend the H.P. Lovecraft Radio Hour Volume 1 to both longtime Lovecraft fans and those who are just getting into his work. I hope they switch over from CD-Rs to factory-pressed CDs in future, as I think the series could do very well in “brick and mortar” retail settings.

Keep your eyes on the official website, as a second volume is in the works. When will it be released? When the stars are right…

Special thanks to Changing Elevations for the review copy!

Bad Behavior has blocked 1524 access attempts in the last 7 days.