A Handful of Dirt: Belle Dee of Doo Wacka Doodles 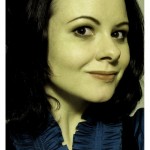 Distinct and vivid as if its coming off the page, the art of Belle Dee has won her praise and respect. As an illustrator and graphic designer, some of my work has been published in Little Shoppe of Horrors and Rue Morgue magazines. It also won her a Rondo, as her drawings of classic and current horror earned her 2010’s Linda Miller Award for Best Fan Artist.  She also recently complete some work for Horrorhound, and will also be doing more work for their magazine later this year. When not working on art, Belle Dee can usually be found watching horror movies.

Find her work over at Doo Wacka Doodles. You can also find her making an appearance at Wondercon this May 26-27th. Also head over and like her artwork fan page at Facebook.

If you were to insert yourself as a character in a cartoon show, which show would it be?

I think I’d feel right at on The Venture Bros.

What’s an unlikely comic inspiration that people might not connect with your work?

That’s kind of a tough one, since I think that any one that I named would be pretty obvious. But I guess that I would say that the two big orange cats, Heathcliff & Garfield were big influences. I had a bunch of their books and I would try to draw some of the characters from them, when I was a kid.

Currently, what do you attribute being your creative “white whale,” in that you’ve tried to make (editor’s note: in this case, a drawing or art piece) but haven’t been able to get it exactly to your liking?

There are several things. For the last two years or so I’ve been trying to get the perfect Bela Lugosi drawing. It’s always a bit off. I recently did a couple that I’m just about satisfied with. The newest one is I’ve been trying to draw Benedict Cumberbatch (from the BBC Sherlock series), and he’s really tough. Which is surprising because he’s so unusual looking.

Which Muppet would you invite over to your family’s home for Thanksgiving?

Probably Sam the Eagle. I would get to be the ‘weirdo’ at dinner.

If you were to join the Coney Island Sideshow as a featured performer, what is your talent?

I don’t know. Maybe I’d teach my cats circus tricks. Then I could wear a cat costume, and we would all perform together. Like a dancing cat show.