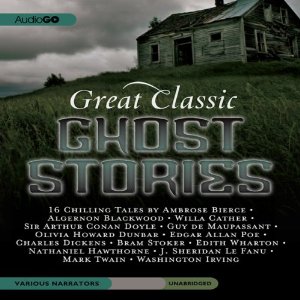 The term “ghost story” can have many meanings. The most obvious one is a scary story specifically about one or more ghosts, while others might use it to describe any scary story. Some might even go as far as to label any tale involving a ghost as a “ghost story,” even if the story isn’t scary at all. In creating Great Classic Ghost Stories, AudioGo has opted to embrace all three meanings. Their selection of tales consists of “The Damned Thing” by Ambrose Bierce, “The Empty House” by Algernon Blackwood, “The Consequences” by Willa Cather, “How It Happened” by Sir Arthur Conan Doyle, “A Ghost” by Guy De Maupassant, “The Shell of Sense” by Olivia Howard Dunbar, “Ligeia” by Edgar Allan Poe, “The Signal-Man” by Charles Dickens, “The Secret of the Growing Gold” by Bram Stoker, “The Fullness of Life” by Edith Wharton, “An Old Woman’s Tale” by Nathaniel Hawthorne, “Playing with Fire” by Sir Arthur Conan Doyle, “Narrative of the Ghost of the Hand” by J. Sheridan Le Fanu, “The Facts in the Case of M. Valdemar” by Edgar Allan Poe, “My Platonic Sweetheart” by Mark Twain and “The Bold Dragoon (or The Adventure of My Grandfather)” by Washington Irving.

“The Damned Thing” is arguably one of Bierce’s most famous tales, which deals with an invisible monster. Despite being written in the late 1800’s, the ideas it presents are quite advanced. “The Empty House” details what happens when a man and his elderly aunt investigate a house said to be haunted by the spirits of a vengeful stableman and the servant girl he murdered. In “The Consequences,” (also simply known as “Consequences”) a resident of New York in the 1900’s wonders why an acquaintance of his is fearful of a strange old man in black. “How It Happened” has a medium relay the story of a most unusual meeting between two old friends. A man goes into an old friend’s room to fetch some papers in “A Ghost” and quickly learns why his friend was so fearful of going there himself (although for reasons one might not suspect). I should note that this version is an all-new translation and differs somewhat from the text editions that can be found online. In “The Shell of Sense,” the ghost of a recently deceased woman tries to use her minor influence on the real world to bring a special message to both her husband and sister. A man’s mourning of his first wife has an unexpected effect on his current wife in Poe’s classic tale “Ligeia.” In “The Signal-Man,” a man is haunted by both a phantom signal man and the sound of his bell, which only he can comprehend and whose appearance always heralds a horrible accident. A family feud turns deadly in “The Secret of the Growing Gold,” when a vengeful spirit offers two siblings a horrific method of recouping their diminished fortune. The Spirit of Life teaches a recently deceased woman about why her seemingly unsatisfying life wasn’t as bad as she once thought in “The Fullness of Life.” In “An Old Woman’s Tale,” we learn what two young lovers experienced when meet several odd people in a dream…or was it? A group of friends seeking entertainment learn that séances aren’t all fun and games in “Playing with Fire.” The story also features the unintentionally un-PC line “…the sounds of a fagot burning briskly on a frosty night.” A spirit haunting a house who seems to always hide everything but his hand (but still manages to terrify) in “Narrative of the Ghost of the Hand.” Oddly enough, this is actually a selection from The House By The Churchyard whose full title is “Some Odd Facts About the Tiled House – Being an Authentic Narrative of the Ghost of a Hand.” I like how the explanation for the ghost is only touched upon, which makes for a more realistic experience. A hypnotist uses his abilities to hold the spirit of a dying man between two worlds in “The Facts in the Case of M. Valdemar.” Thanks to the name, many people thought this surprisingly gory tale was an account of real events! Throughout his life, a man dreams of meeting with a young woman in a variety of locales in “My Platonic Sweetheart” (originally called “The Lost Sweetheart”). Although her physical features and name may change, he always knows it’s her. But is she just a dream or something far more real? Finally, “The Bold Dragoon (or The Adventure of My Grandfather)” shows that a rowdy dragoon’s encounter with a ghost has amusing consequences

With so many tales to tell, AudioGo has wisely opted to use multiple narrators rather than saddle one with all 16 stories. Said narrators are Bronson Pinchot, John Lee, Jennifer Bradshaw and Gerard Doyle. Pinchot and Lee handle the bulk of the work, while Bradshaw only narrates two stories (“The Shell of Sense” and “The Fullness of Life”) and Doyle’s sole contribution is “Narrative of the Ghost of the Hand.” Jennifer Bradshaw’s stories were most likely selected due to their female protagonists, which are well suited to her calm, soothing voice and her ability to make each female character’s voice distinct (while using sternness for male voices). Although I know of at least one reviewer who has criticized her narration as being slow, I found no problem with it. Although Gerard Doyle has slight accent, I enjoyed it and thought it added flavor to his reading. As the story is all narration, he doesn’t have any opportunities to show how well he can handle multiple characters. John Lee handles “The Empty House,” “A Ghost,” “How It Happened,” “The Secret of the Growing Gold,” “The Signal-Man,” and “Playing With Fire.” His voice makes a great first impression in “The Empty House” and his handling of the introduction to “The Signal-Man” is fantastic. His voices for female characters nicely convey femininity without lapsing into falsetto and he gets to display his talent for accents in “A Ghost.”

But you’re probably most curious about Bronson Pinchot. To answer the most obvious question, I can guarantee you that he doesn’t do anything remotely resembling his “Balki” voice. Pinchot narrates “The Damned Thing,” “The Consequences,” “An Old Woman’s Tale,” “Ligeia,” “The Facts in the Case of M. Valdemar,” “My Platonic Sweetheart” and “The Bold Dragoon (or The Adventure of My Grandfather).” I personally feel that he’s better suited for narrating tales that don’t ooze horror from start to finish and that he’s better doing only one or two characters voices than attempting to handle numerous characters. In fact, his female characterizations are just him speaking softly. That said, he did handle the two Poe tales well due to their matter-of-fact, past tense nature. Although I didn’t care for his performance in “The Damned Thing,” I thought did an amazing job in “The Consequences” due to its fairly cheerful beginning and focus on an oddity in the city rather than true terror. He similarly hits it out of the park in lighter fare like “My Platonic Sweetheart” (in which he adopts a great Missouri accent) and “The Bold Dragoon (or The Adventure of My Grandfather).” Unlike the last story collection I reviewed, this does not feature any music at any point during the stories.

Similar to their other releases, AudioGo has packaged Great Classic Ghost Stories in a cardboard box with no liner notes. All 6 discs are packaged in a massive double-sided foldout cardboard slipcase and make for a total of 7 hours and 19 minutes worth of ghost stories. Purists will be happen to learn that this collection is unabridged; the reading of
“Ligeia” even includes the opening quote from another work!

Bad Behavior has blocked 736 access attempts in the last 7 days.