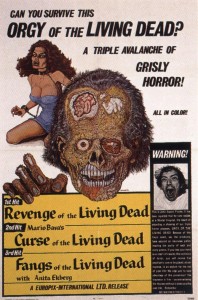 The company behind the triple bill, Europix International, definitely pulled out all the stops for this promotion. In addition to the above trailer, they created multiple promotional posters, a pressbook and even providing “shock insurance.” While my source for that last gimmick claims that it’s a variation of a gimmick used for William Castle’s Macabre, my research has found a similar, earlier offer used in the promotion for The Screaming Skull.

UPDATE: I’ve since found scans of the pressbook for the above double feature, which devotes entire pages to the Up-Chuck Cup and trailer!