Review: The Brains, THE MONSTER WITHIN 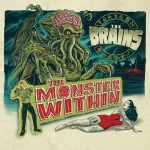 The Brains, The Monster Within
[audio:http://www.gdl16.com/audio/STAYBACK.mp3]

The sixth album by The Brains, the Montreal Psychobilly band, continues the band’s sound of blending pummeling rhythm and melodic vocals to create a new album, The Monster Within. The Brain’s have a well set sonic identity and this is another addition to their discography.

The Monster Within is a nicely crafted album, not a mere scattershot listing of songs, as each track flows effortlessly from one to another. The stitches on the monster can’t be seen. There isn’t any discord, evidence of the band’s years of expertise. This isn’t an album that requires you to sit down and PAY ATTENTION. It’s an album meant for you to get up and move, either to wreck around or to have playing while you make a robot in your garage.

There are some standout songs. “Devil In Disguise” jumps to mind. “Bleed” starts off with an infectious bass line from Colin The Dead, before Rene D. La Muerte’s crooning voice invites you in. Pat Kadaver’s drumming really demonstrates how psychobilly drummers are often underrated, not just keeping up but leading the way for Colin’s bass and Muerte’s guitar.

The guitar work really stands out on “Rest In Pieces” and the album’s instrumental piece, “Cucaracha In Leather.” That song is a perfect snapshot of the band’s ranges, as the Brains mix in punk, metal, surf guitars and whatever they want. The metal-twang dance of the guitar invokes some of Dick Dale and Duane Eddy, while the bass and drums never miss a beat.  The Brains are a well oiled kustom. These are fiends are 1000%ers.

The Monster Within is the perfect psychobilly record to give to your friends who are curious to what it’s about. There’s something here for everyone in this album. It’s for the neophytes, the converted and the devout.

The Brains’ The Monster Within comes out on Stomp Records in their native land of Canada, on Sailor’s Grave Records in the US and on People Like You in Europe.  Definitely a good addition to your collection or a great way to start one.