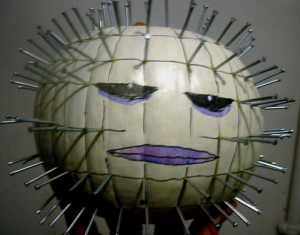 Those who already checked out my past articles on pumpkin carving tips and pumpkin stencils might find themselves thinking they have exhausted all of the possible ways to decorate their Jack O’ Lanterns for Halloween. As the above image demonstrates, those people would be very wrong. The Pinhead pumpkin is only tip of the iceberg of pumpkins created by Jared von Hindman. In addition to new spins on old favorites like the “Large pumpkin eating a smaller pumpkin,” he also has Frankenpumpkins and Halloween decorations made from various fruits and vegetables (in addition to some carving tips). Not only is that link full of great ideas, but it also touches on many of the tips I’m going to share with you. For example, 1,001 Old-Time Household Hints from Yankee magazine discusses how to carve both sides of a pumpkin. Wikimedia Commons has lots of great ideas on display in its “Wikimedia Pumpkin decorating contest” category, including another approach on making a Pinhead pumpkin! Surprisingly, I did not see the classic “pins and plastic fangs” (or “googly eyes and plastic fangs”) method there.

Kelley Taylor’s Holiday Decorating For Dummies has some nice basic advice on carving and painting pumpkins while Halloween: The Best of Martha Stewart Living shows how certain tools and metal cookie cutters can make carving easier. The October 1972 issue of Boys’ Life recommends carving the lid of your Jack O’ Lantern on the bottom so as to make it easier to light the candle. To prevent the candle from falling over, carefully insert a short length of wire into the bottom of the unlit candle and then pushing down into the lid so the remaining part of the wire becomes embedded. Similarly, Pumpkin Chic: Decorating with Pumpkins and Gourds by Mary Caldwell has some great advice about making access hatches and vents for your Jack O’ Lantern. She also has some great ideas involving pumpkin stems. The “stem as a nose” style can be combined with other carving techniques to great effect.

The October 1962 issue of Popular Mechanics also has tips on using vegetables to decorate pumpkins, along with other interesting ideas. The winking pumpkin idea is intriguing although I suspect modern battery-powered light sources will be safer than the method the author suggested. Create a Bewitched Fall-o-ween: 45 Projects for Decorating and Entertaining by Kasey Rogers and Mark Wood demonstrates how a pumpkin can be easily turned into a little house. Home For Halloween on Facebook shows an alternate method of making pumpkin houses (along with many other carving ideas). The Home Haunters Facebook page has plenty of ideas (complete with links to tutorials). Everyday Is Halloween brings us ideas for pumpkins like “Homer o’ Lantern,” “Face Your Fear” (a nifty projection pumpkin variation), “Decaying Pumpkin,” “Pennywise the Dancing Clown” “Jack Skellington” and other creative ideas. I Love Halloween has an example of the classic “mooning pumpkin” display, along with some brilliantly simple bat pumpkins.

Finally, no discussion of creative Jack O’ Lantern ideas would be complete without a link to ExtremePumpkins.com. It also wouldn’t be complete without a few quick safety tips (in addition to the ones given above). Be sure to use proper precautions when decorating your pumpkins and never leave Jack O’ Lanterns lit by candles unchecked for long periods of time. Extra precautions will be needed for some of the more extreme ideas linked to here, so please keep that in mind as well.

Special thanks to Jared von Hindman for use of the image!

Bad Behavior has blocked 1208 access attempts in the last 7 days.