The Legend of Sleepy Hollow (& Other Loathsome Locales) 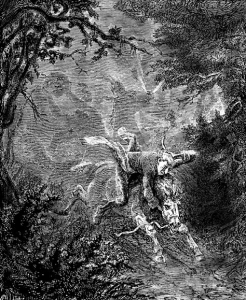 There’s a special village tucked away in New York. It’s so quiet and pleasant that one could even describe it as being “sleepy.” If not for one infamous resident, most people would think it would be an ideal place to visit. But we’re not “most people,” now are we? So let’s read the Halloween classic that is Washington Irving’s “The Legend of Sleepy Hollow.”

Speaking of the greatest holiday ever, “The Ledge” by Kiddferd P. tells the tale of a sensitive soul’s encounter with menacing trick-or-treaters while “Come See Old Witchy” by Ken L. Jones takes us into a most unusual garage haunt. It also demonstrates why one should never destroy someone else’s Halloween decorations.

What terror tour with be complete without a trip to a graveyard or two? “The Graveyard Speaks” by Hunter Shea takes us to one where a ghost appears over a gravestone each night. A graveyard also appears in “Horror At Vecra” by Henry Hasse, but the back-country New England town of Vecra isn’t haunted by any mere ghost. The eldritch tomes in the room at the back of Eb Corey’s house made that very clear. Did I mention how people who sleep in that room often have the exact same dream…or how those who have that particular dream usually disappear?

Now we travel from New England to the original England. Leighton, to be precise. That’s the home of scenic lake Henpin and the structure nearby which locals refer to as “the abbey.” It’s an ancient stone building with lots of subterranean chambers. And secrets. You can learn more in Paul Tobin’s “The Drowning At Lake Henpin.”

The nature of our next destination is obvious thanks to the story’s title: “The Thing In The Crib.” You might also know it under the alternate titles author Tom Smith gave it, “The Task of Carter Randolph” and “Cthulhu Cthild Cthare.”

“The Graven Image – Being the Narrative of James Trenairy” by William Sharp brings us to a remote house in Kensington which contains a most disturbing work of art.

Let’s hit the high seas by taking a ride on the good ship Kamtschatka. But maybe it isn’t that good of a ship after all, since passengers keep throwing themselves overboard after staying in a certain room. Francis Marion Crawford will reveal the sinister secret of “The Upper Berth.”

Sinister secrets also come into play over the course of “The White People” by Arthur Machen. In it, friends who gather at a moldering old house discuss the nature of evil read the unsettling diary of a young girl. There’s trips to white realms with hills as high as the moon and hidden places were rocks grin and twist. I’m amazed the creepypasta community never latched onto this like they had previously done with other older works of fiction.

While we’re in Europe, let’s head on over to a mountain in Spain haunted by undead Knights Templar. If that reminds you of Tombs of the Blind Dead (exception for the part about the mountain), that’s because “The Spirits’ Mountain” by Gustavo Adolfo Bécquer was the inspiration for it! His work also inspired Jesús Franco’s Mansion of the Living Dead and Cross of the Devil. The upcoming Curse of the Blind Dead is also based on two of his stories. Many of these works can be found at the same link I provided for “The Spirits’ Mountain.” The book’s table of contents claims these are actually legends collection from around Spain but I don’t know if this is true or if it’s another classic use of a “false document” in horror fiction.

Since we’re on the subject of authors whose works have inspired numerous horror movies, let’s move on to H.G. Wells! Everyone knows how The Island of Doctor Moreau takes place on a tropical island where inhumane experiments lead to inhuman creatures, but how many of you know about his short horror story “The Red Room” (which hasn’t inspired numerous cinematic adaptations)?

M. Grant Kellermeyer usually collects and republishes vintage scary stories at Oldstyle Tales Press, but he’s also been known to create his own tales of terror. “Shadow and Dust” finds a man who sleepwalks into his basement each night. Why does he do this and what does it have to do with his children’s nightmares about someone standing over their beds at night? “Lost and Found” takes us to a family gathering by a lake. But when someone finds a watch and decides to go home alone rather than go with the others, he has a chilling discovery about his new timepiece’s original owner.

Robert McCammon plenty of short stories to choose from, but “Lizardman” and “Black Boots” immediately caught my eye. The first story takes us to a swamp, but the beast lurking in it isn’t a humanoid reptile! No, it’s something far more unusual and you’ll have to read the story to find out. As for the second tale, it follows a cowboy being followed by something nasty in the desert.

If you’re sick of the great outdoors, head inside the Victorian house which figures so prominently in the climax of “Reflections In Black” by Steve Rasnic Tem. Or perhaps you might prefer a trip through Rhianne Purificacion’s “Hall of Statues” at a museum? This tale differs from the others since it actually stars…YOU! The Noctrium’s library and Horror Garage have more frightful fiction as well!