Make Your Own Lament Configuration 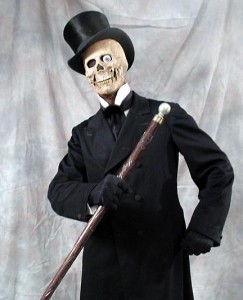 Along with seeing The Ghastly Ones last year, I was privy to witness Mr. Deadguy, as he was the host for the night. Known for his ventriloquism, his songs (he sang ‘The Hearse Song’ as well as his own, ‘Everyday is Saturday (When You’re Dead.)’ ) and his jokes. He’s a classy entertainer, who you should catch if you can.

Here’s hoping he releases a record or increases his web presence. He did a nice cover of Jupiter Fly-By’s ‘Digging Up Felix’ at the JFB tribute night. Unfortunately, they’ve taken down the video. High recommendation, here.