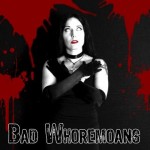 I avoided certain genres of music for a while because after one or two attempts to get into them, the handful of bands I optioned all sounded the same. Psychobilly was this to me for a while – I just could not get into it because everyone I listened to was doing a bad Kim Nekroman impression, turning the upright bass up in the mix and having that deep-gulch yokel vocal.

Homogeny is the worst thing to happen to a scene or a genre. When there is only a specific look and sound that’s accepted, innovation is impossible since all the people doing different things are forced out. And once that acceptable sound is established, there can be so many new bands conforming to it that homogeny actually promotes a premature nostalgia. Look at modern mainstream country or the current state of rock.

This is why a band like Bad Whoremoans is a good thing. On their own, they’re a great punk band. As a horror punk band, they’re fucking fantastic because in addition of a sound that doesn’t sound like anyone else, they bring that “fresh blood” into it. They take their sound more from garage punks and the Descendents than the Misfits, which is a bit of poetry since Paul of the Living Dead, frontman and founder of the band, is 100% New Jersey.

Perhaps that’s why Bad Whoremoans don’t sound like the Misfits. If this band’s music, in any way whatsoever, shows some influence from the Lodi, NJ band, there would be the instant connection. It’s a shadow that I think many bands out of the Garden State have to evade. Sort of if you wanted to start up a band in Liverpool, Seattle or Gary, Indiana.

BAD WHOREMOANS is a celebration of the VHS age of cult and horror movies. Included on the album is a double Troma feature, songs about both “Surf Nazis Must Die” and “Class of Nuke’Em High.” Hometown hero Jason Voorhees gets a celebratory ode with “Camp Crystal Lake,” whose infectious chorus makes me think it’s a blast to see it live. Other horror staples like Michael Myers (“Haddonfield Horror”), Frankenstein’s Monster and its Bride (“It’s Alive”), Christine (“Killer Car”) and vampires (“Vampire Pin Up Girl”) are all represented.

I think that’s why I like this music. This is the soundtrack to growing up with a Video Store. This is the music for the weird kids that spent their teenage years among VCRs and faded cover art and plastic cases. Mutant slasher punk youth that doesn’t take itself too seriously because that’s not fun.

There’s some really good songwriting present here and that’s evident with the acoustic tracks for “My Dead Girlfriend,” “She’s Weird” and “Graveyard Girlfriend.” It’s a tender side of Paul of the Living Dead’s vocals and able to adapt a punk song into a somber, if not romantic, ballad.

At this point, there’s only one Bad Whoremoans release and Paul of the Living Dead’s activity is also divided up with his band, The Exstatics. Hopefully, there will be future music from this band since we need new voices to rise above the din and keep us going.

Bad Behavior has blocked 857 access attempts in the last 7 days.