Up Hi? Down low: The Aquabats and growing old.

Year of The Von Drats 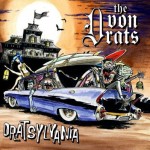 2011 might be the year of The Von Drats, the surf band from out of Toronto. Riding high from their debut release in 2010, the rockin’ “Dratsylvania,” the band has seen a pick-up in activity in 2011.  First, they were the only surf band on the Rue Morgue comp, Hymns from the House of Horror Vol.2 (which, if you haven’t downloaded by now, it’s too damn late and you had over three months to do it. Lazybones.)

The momentum has carried the band forward. They recently “backed” the debut run of The Tiki Bikini Beach Paradise Party A-Go-Go in Toronto’s 2011 Fringe Festival, sort of the festival to let the freaks and geeks have the stage and spotlight in a town that’s notoriously known as the place where hit Broadway plays go to get their act together before schleping down to New York. From what the reviews make of it, ‘The Tiki Bikini Beach Paradise Party A-Go-Go’ is a loving tribute to the beach movies and surfer/island culture of the 50’s and 60’s. From what I’ve read and heard from someone who has went, it’s a fun show and I’m glad that the Von Drats were able to participate. The show was listed as part of the “Best of Fringe,” and I doubt the show could have gone there without the expert music from those horizontal-striped Dratsylvanians.

As if being stars of the underground stage wasn’t enough, the Von Drats have taken to the airwaves. Or cablewaves. They provide the opening theme to the SPACE series, Fanboy Confessional. Check out the trailer below.