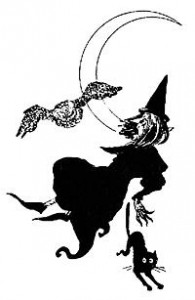 Since I had so much fun putting together my first “Tricks and Treats” article last year, I thought I’d give it another go:

Thanks to Hulu, you can watch horror movies like The Blair Witch Project or Raiders of the Living Dead online for free!

In addition to his show being syndicated nationwide on Me-TV, Svengoolie (one of the local’s favorite horror hosts) will be hosting a monster movie marathon on This TV this Halloween!

Have you ever read August Derleth’s “posthumous collaborations” with H.P. Lovecraft and wondered just how much of the story was actually by Lovecraft? Well, wonder no more, as you can read H.P. Lovecraft’s commonplace book (which Derleth used for the collaborations) here.

Google Books offers complete uploads of old LIFE magazine issues, which I used to find this old article about Halloween. And thanks to the full views of Billboard magazine, I was able to find two amazing issues from the 80’s dealing with video stores’ Halloween promotions (along with tons of vintage ads for now-defunct VHS companies’ horror output).

I don’t know about you, but I was shocked when I found out that >There’s Nothing Out There and Liquid Sky had official websites. Similarly, the co-writer of Meet the Hollowheads has put up the production diary for the film online.

For those of you not satisfied with last year’s selection of free pumpkin carving stencils, here are some Squidbillies stencils you can carvify.

If you’re going out as a Ghostbuster this year, you might find these plans for making a slime blower replica handy.

My Coke Rewards has a free discount coupon for Halloween Horror Nights at Universal Studios while Newbury Comics has a “20% off all Halloween items” coupon.

If you request a free catalog from Skirmish paintball, you’ll receive a free DVD featuring a brief (but hysterical) segment about a Dracula-themed paintball battle.

Here’s a funny list of 30 ways to confuse Trick or Treaters. That said, this should along be regarded as an amusing read rather than a how-to guide. Be a good sport and give out goodies. If you want to confuse them, I’ve found that wearing a costume while answering the door tends to help.

If you really want to trick them, why not try one or more of these spooky ideas from Ed Morrow’s The Halloween Handbook.

Bad Behavior has blocked 3078 access attempts in the last 7 days.