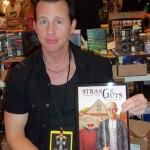 Considered a prodigy in his early years, Brian J. Orlowski set out immediately to disprove that moniker in great success. In the late 80’s and early 90’s, Brian became a stand-up comic (actually fairly good) and performed over a hundred times across the north New Jersey area.

Brian has been a graphic artist, technical artist, comic book colorist, multimedia specialist and eked out a certificate from the prestigious Joe Kubert School of Cartooning and Graphic Arts. He is a regular contributor to Girls & Corpses magazine and several other publications suffering from a lack of public awareness.

Brian’s first book, Strange Guts: American Septic, a collection of over 100 single-panel cartoons is available on Amazon.com and BarnesandNoble.com. It is the Far Side meets the Evil Dead. Gory, gruesome and goofy. “Strange Guts is a red-blooded horror fan’s answer to Peanuts, replacing the cute dog with explosively funny gore. I love it.” Andrea Amanda Albin, Bloody-Disgusting.com

He lives at home with his large, stinky dog, Abigail, and antisocial cat, Buddy. Every year Brian travels to the arctic to participate in the running of the lemmings. He is currently taking an online skydiving course.

Which comic book character would you do unscrupulous things in order to write/draw professionally?

If you asked me years ago I would’ve said Spider-Man. He was the greatest thing in the world to me as a kid. Now, I’d kill to have my own zombie series, like the Walking Dead. Not only are the undead fun to read and look at, they’re cool to draw. There’s no limit on deterioration, damage and gore. The messier the better. Plus, drawing dead people eating living people is just plain fun. Now I’m hungry. I like bacon. Bacon and dead people. But not both for food. Well, not normally.

What is a movie you like that would shock people if they found out that it was one of your favorites?

I think my taste in movies and my DVD/Blu-ray collection is pretty standard. 99% horror. I guess the 1% that would surprise anyone would be that I like digital animation movies. Ice Age, The Incredibles, Up. I have a bunch. I dig them. They make me feel young. Which is very hard to do. I think that the fact that I really like The Three Amigos would surprise peeps. Plain, stupid, fun. Kind of like me. 80’s comedy dreck like Spies Like Us and Funny Farm is a good way to kill a few hours and brain cells. But then again, so is vodka.

Being that you’re crazy rich and just crazy, you’ve decided to have an all day film festival at your theater – what are the movies you show?

If I’m the only one attending then it would be non-stop porn. But if I have to invite the general public it would obviously be a horror-athon. I’d start it with real classics like The Blob, Them and Night of the Living Dead. Move up to the 70’s with Halloween and Dawn of the Dead. Have to get The Thing in there. Evil Dead II, Aliens. Probably end on Shaun of the Dead. That movie is still tops on my list. If I included all my favorites, then the festival would take days. But I’d really rather have some Vivid movies in 3D on the big screen. And plenty of Kleenex on hand (pun intended).

What single piece (editor’s note: in this case, artwork wise. Bonus: please link if available) do you think is the best representation of your talent and personality as a creative mind?

I’m pretty tough on myself. I don’t think I’m a great artist. I draw well enough to get the job done. I think I’m more of a humorist. If I could actually get onto paper what was in my head I’d be serving time in an institution somewhere. Again. You can’t make me go back! No more pills! But if I had to choose what I’m probably happiest with then there’s Creepy Gene and my most appreciated gag is Achieved the Impossible . I think my Photoshop pieces make me the happiest ( http://www.drawnofthedead.com/photoshop.htm).

What was the best book you read within the last year?

Aside from my own? I mean, really, my book is fantastic! But kidding aside, I’ve read a lot in the past year. I thought What the Night Knows by Dean Koontz was one of his better books. The Warded Man by Peter V. Brett was pretty spectacular as a fantasy/horror combo. Several of Tim Dorsey’s books, I totally dig his frantic, ADHD writing style and violent humor. The best, and it’s an oldie, was I actually read Clive Barker’s novella of Hellraiser for the first time. It was phenomenal; the man’s language is unbeatable. But then again, Clive never created cartoons like I do. How do you spell narcissist? Which is almost an anagram of antichrist. Odd how that is.