Kickstarter has become the number one “crowd-funding” sites out there, mainly due to high profile people using the service.  I’ve talked about it in the past, both with Transylvania-TV’s Halloween Special and mentioning the service in a write up about the remake/prequel/sequel of the 2006 movie Behind the Mask (aka Before The Mask).

Friend of the site, Joel “MAX REVERB” Kapland has recently written a grindhouse-fantasy novel entitled HIGH ON BLOOD AT THE END OF THE WORLD. Joel’s a man who, despite currently living in Florida, bleeds the blood of a Maine man. You can tell from the picture he’s got for the proposed book. Don’t let the MSPaint fool you: 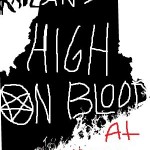 Joel is a member of the Necro-Tone family. He has played with The Crimson Ghosts, The Quasi-Men, maybe the Demon Seeds (I can’t really be sure, but I wouldn’t be surprised). (edit: I have been informed that Joel wasn’t part of the Disconnect.) He’s currently in Gigi and the Cretins down in Florida and this is a way to help this punk out. He’s self-publishing the book and every pre-order (depending on the pledge level) gets you some sick rewards. You can even be a character in the sequel (if there is a sequel, and well. There’s always a sequel.)

Help a cretin out.

Disclaimer: Kickstarter has its downsides. First off, if you overstate your goal and don’t make it, you get NOTHING. Let’s say this: You put your goal at 1,000 dollars. You manage to get about 800 pledged and reasonably, you can get your project made with that amount of money. But because you don’t make the 1k in time, you get nothing. In order to ensure that you get SOME money, you likely have to understate your budget.

In addition, depending on the project/budget, that 1000 dollars is subject from anywhere to 8-10% in fees (5% to Kickstarter, 3-5% to Amazon.) Middlemen! There are additional sites with their own caveats, so pick and choose if you ever look towards the masses online to help fund you.

So Joel has his goal at 1000 dollars. He’s got six weeks to make 355 dollars in order to qualify for funding. He made it so that the smallest amount of books run off in this would be 50, at 20 bucks a pop. In addition to that basic pledge of 20, you get your book signed, a sticker AND a mix-CD from Joel himself. This is punk rock.

I’ll be plugging this for a while (over on Twitter and on the podcast) so if you want to stop hearing about this, donate and get your friends to donate. He only needs about 18 more people to buy the book and bam! Success. 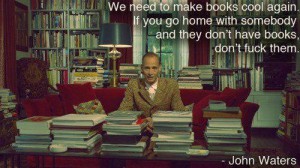