Almost Horror, Not Quite 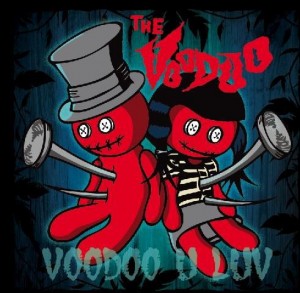 There aren’t many albums that I listen to from start to finish on my first play. I usually stop, do something completely unrelated to the music at hand and, when a significant amount of time has passed, I come back to finish the album, usually restarting it. Or, worse, the music is so bad that I need a break from it before continuing.

Voodoo U Luv by The Vooduo was a rare exception, for after loading it up, all notion to stop the music was dismissed and external distractions were kept at bay. Good rock and roll keeps itself going until the records over, transporting your conscious out of the limits of time, gravity and social obligations. When the record wound down, I actually went back to the beginning and listened to it again.

When an artist releases two albums within two consecutive years, it’s traditionally accepted by the rock and roll journalist cartel that both albums are two sides of the same coin. I think Zappa’s Over-Nite Sensation/Apostrophe(‘) combo is an example of this, as well as the Lust In Space/Bloody Pit Of Horror combo that Gwar put out in 2009/2010. Arguments by demented critics are made as they froth and frug at the audacity of a music group DARING to have a prolific output. Instead of two albums, blubber the critics, the artist could have released a single entity composed of the best songs, picked and chosen from the two.

If going by this pattern, Voodoo U Luv is the second half of the story started by last year’s The Rock And Roll Creatures Who Stopped Living And Became Mixed Up Zombies. But if you listen to them both, Voodoo U Luv is its own creature. Rock And Roll Creatures… established the Vooduo’s sound, cementing the foundation first laid by 2008’s Have Voodoo, Will Travel. This third album by the duo of Eerie Powers and Neidi Night shows some real growth and experimentation. Maybe this was the plan – a rock and roll striptease, showing bits and inches of their talent slowly. It’s very clever of them.

They still play the skinless-blood-guts-soul bared-rock and roll that comes from Eerie’s guitar and Neidi’s drums, but somehow, they manage to make this simple set-up sound so different on each song.

I really don’t know how they did it, but they did. They topped their last album. I thoroughly loved Rock And Roll Creatures, for its playfulness and its distinct sleazy, groovy, grindhouse sound. And I love Voodoo U Luv because it’s NOT just another Rock And Roll Creatures…. Each song is a new world to explore.

The slow haunting track of ‘Zombie Love,’ where unofficial third member Dave Klein rocks the Theremin (whose skills and keyboards were also on Rock and Roll Creatures…) provides the atmosphere for a ghoulish shimmy of a song. It’s similar enough that it connects this with the prior album, but it’s different enough to surprise you.

And wow. There are many surprises on this album. A lot more twang in songs like “Evil Eye” and “Howlin’” than previously reported. “You Is A Rat Pfink” is delightful. I thought that a lot of The Cramps spirit was infiltrating ‘Rock And Roll Creatures.’ Here, on Voodoo U Love, I envision Link Wray has come up from the grave to sit in for a session. Maybe Eerie has been possessed by Wray? It’s possible. If you listen to ‘That Voodoo,’ it sounds like it. Maybe an exorcism is required? Or perhaps a twenty-city tour. I also think Neidi Night’s drums are haunted because they cause me to dance when I’m not paying attention. Her rhythm is contagious, unavoidable like a gypsy’s curse.

This is a high recommendation for me if you like rock and roll. If you like twang, if you like the type of country that made Elvis shake, if you’re into the type of music that makes the dead walk the earth and bum smokes off your mechanic as he’s sipping a beer at the bar, then you want this album. This is the voodoo that the VooDuo do so well, the voodoo you will love.