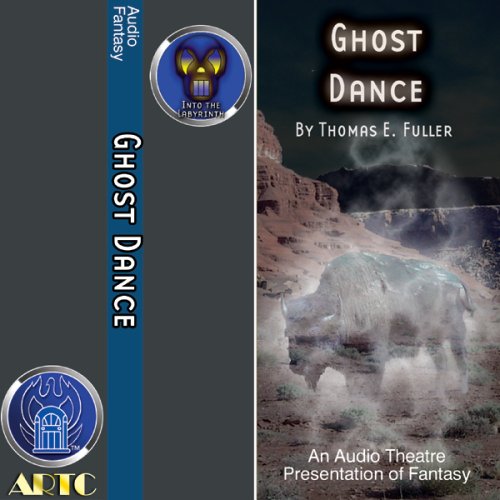 While writing my review of Special Order, I had sought out other Lovecraftian audio dramas by Atlanta Radio Theatre Company. I thought I had come across one when I read the description for Ghost Dance, whose description noted a dance that is “…out of history. And out of time.” I immediately pictured what the story could be like: The Ghost Dance prophecy turns out to be an incantation to summon the Great Old Ones or Outer Gods, with the promise of restored order and buffalo actually being a misunderstanding about mankind being wiped out and hoards of either the dark young of Shub-Niggurath or the vaguely human quadrupeds noted in “The Mound.”

I waited in anticipation as the drama effectively opened with a recitation of the prophecy. Drawn in by the manager of Big Nevada Johnson’s Wild West Land struggles with his grandfather (and with his rejected heritage), I sympathized with the tribal members who are understandably annoyed with being forced to perform dances by other tribes rather than celebrate their own heritage, simply because their dances didn’t test well with tourists. It didn’t make what I know they were going to do right, but I could still understand it. With the hilariously dead-on ads for the tacky tourist trap serving as transitions between segments, the strange events caused by the Ghost Dance rituals became more and more apparent. But as mysteriously trampled crops gave way to the reappearance of buffalo in the area, it became more and more apparent there was no Lovecraft connection. Although this realization was disappointing, I can’t fault Ghost Dance for my mistakenly thinking it would be a horror story rather than a modern fantasy. Truth be told, my feelings towards this drama are pretty similar to what I felt about Special Order, overall enjoyment with some minor criticisms here and there(I didn’t care for a few characters’ voices and thought one of the running gags went on for too long). While putting together some research for this review, I stumbled across an interesting fact: Not only is the Ghost Dance not Sioux in origin, but the original prophecy never said anything about white people vanishing! But since I had wrongly believed that for so long, I’m actually glad Ghost Dance did as well, as I never would have looked into the matter otherwise.

As Ghost Dance is only about 27 minutes long, the CD also includes another ARTC release from 1994 called Armada Rising. In it, a series of news stories inform us that underwater disturbances off of Ireland are actually Spanish gallons rising from the depths. It soon becomes obvious that these are the mysteriously revived and restored remnants of the Spanish Armada and their attacks on British ships show that they’re picking up where they left off. As they make their way towards England, the British populace is divided over how to react. Some are fearful and others are oddly enthusiastic about it, to the point of adopting Elizabethian fashion and musical influences. But what will happen when the fleet reaches its destination?

Clocking in at only around 23 minutes, I was surprised at how it dragged at times. In fact, it got to the point where I was actually cheering for the Armada! Like Ghost Dance, this is more of a fantasy rather than horror, although the suspenseful, end of the world feel when the fleet finally reaches England is extremely well done and effective. Both Ghost Dance and Armada Rising have crystal clear audio (thanks in part to their being on a glass-mastered CD) and the brief liner notes provide some information about both plays, the casts of both and even lists the chapter stops. But the Atlanta Radio Theatre Company seems to have predicted my reaction to this, as threw in another title for me to review: A full-fledged weird west horror presentation! 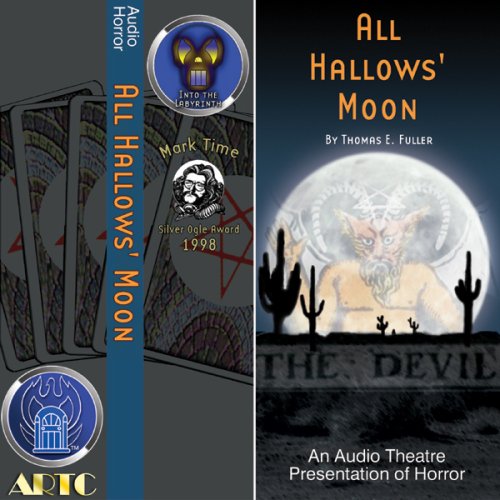 All Hallows’ Moon brings us to the virtual ghost town of Mother Lode, New Mexico. It’s October 31st, the last day of its existence before its last few remaining inhabitants leave. But the town will not die peacefully, as the sheriff is called down to the Silver Dollar Saloon to resolve a disturbance. After he just manages to calm down a trigger happy gunfighter, a terrified woman bursts in ranting about a man chasing her…a man that’s the devil in disguise. When her Tarot card playing pursuer enters not long after, he claims to have never met her before! Tensions rise to the point where the gunfighter shoots the mysterious stranger…who shrugs off the bullets as if they were nothing. And that’s not even half of the play! I can’t say enough good things about this audio drama. The cast is great, the music and storm effects are used perfectly and there are plenty of twists and turns (especially when things start to get slow) throughout its 57 minute running time. Interestingly enough, the actor playing the priest seems to be using a toned down version of his “Big Nevada Johnson” voice from Ghost Dance and the fact that the gunfighter character sounds almost exactly like Slim Pickens’ character from Blazing Saddles. I was honestly half-expecting him to tell the mysterious stranger that he uses his tongue purdier than a $20 whore. That reminds me, the play has plenty of swearing, so this definitely isn’t for kids.

All Hallows’ Moon is a recording of a live Peach State Radio Halloween broadcast from 1996 and seems to have somewhat lower audio quality than other ARTC productions I’ve reviewed. There are some moments that may or may not be audio fuzz, but I suspect that they’re ambient effects meant to represent playing cards. Otherwise, the audio is great (as one would expect from a glass mastered CD). The liner notes have the usual details (cast listing, information about the company and other plays), but I actually preferred the character-based cast listing used in the end credits of All Hallows’ Moon. If you’re looking for an evening of Weird West entertainment, definitely grab this and Ghost Dance.

Special thanks to the Atlanta Radio Theatre Company for the review copies!