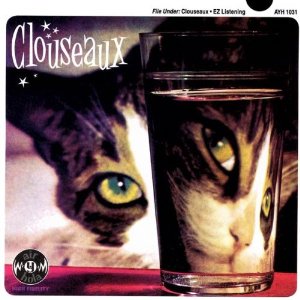 When one thinks of exotica, visions of Polynesia and Hawaii immediately spring to mind. However, exotica groups can be found all over America (and the world). Houston, Texas might seem like the furthest thing from a locale that inspires music to make you think of a tropical South Seas paradise, but it actually makes perfect sense once you realize it’s the home base of Clouseaux. Although widely known as a neo-exotica band, that’s only one facet of their musical identity. Founded by Jay Brooks and David Cummings in 1999, Clouseaux’s sound has been described as everything from “jazzed-up jazz punctuated with mystery” and “the sound track from a James Bond-swanky-spy film that takes ghost train like turns down classic horror movie and 1950’s science-fiction film tunnels and back out again onto beautiful tropical beachs at sunset.” On top of that, the performers in the group are just as varied as the types of instruments used over the course of several albums . According to Facebook, the group’s current lineup consists of:

The first track of their first album, “Krakatoa,” effectively creates a sense of mystery, which is aided by the use of female vocals. The use of a guitar, drums and horn in “Where Are We Now?” gives it both a semi-surf and spy-fi lite feel, which later takes on a Spanish tone. “Le Nuit” features a lot of jaunty piano work and singing (along with a nifty sample touting a “stereophonic sound spectacular”) while “Payaso” shows how this is the furthest thing from a standard exotica album through its tango-esque and various instrumental touches. The slow-paced “Reum With A View” offers a mysterious feel that makes it perfect old school spy music. “Ennui” starts with the same talking effect that closed out the prior track, which more talking leads to traditional exotica-style performance. Piano work and trumpet work abounds, and there’s even a mild sense of menace at one point. “A Most Excellent Flying Death” is a fast paced surf-style track with great organ work and reverb, while “Fist On The Green” is easily the catchiest financial argument you’ll ever hear. Fans of the podcast should be familiar with “Jack The Ripper,” which makes great use of drums and reverb for a creepy stalking effect. “Marauder” is a a bit moody and sounds like it came straight from the nightclub of my dreams. There’s plenty of trumpets and bass, along with amazing guitar work. There are also points where it gets Brian Setzer or ska-like at times, so this track is a great way to introduce fans of that kind of music to the world of Clouseaux. 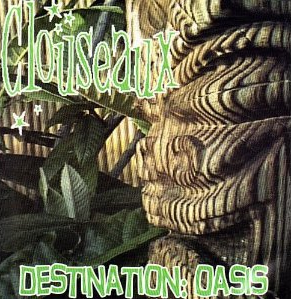 Next is the 2003 EP Destination: Oasis, which was first released at the third Tiki Oasis. Said EP has “Krakatoa” and “Reum With A View” from their first album, in addition to “Shrunken Heads,” “Copper Locked Nymph” and “Destination: Oasis” from the (then) upcoming album Lagoon! There’s also an exclusive track called “Chic Alors!” Said track features peppy maracas, bongos and light music. Although it has a Spanish feel, it has French dialogue. It’s odd, but I like it! 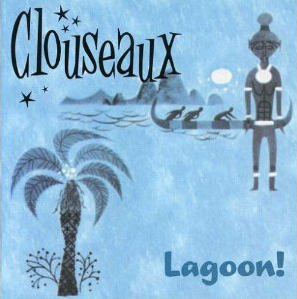 Lagoon! came out the following year and if Clouseaux demonstrated all of their preferred styles, then this album focuses more on their exotica influences (specifically neo-exotica). “Lost Lagoon (Intro)” sets the stage perfectly with animal calls and a laid back beat. But thanks to the sneaky vibes, there’s also a hint of darkness. Thanks to its speedy bongos and chanting, “Shrunken Heads,” has a definite tribal feel. I also love the spooky, surfish guitar work. Speaking of surf, the opening of “Destination: Oasis” has a classic surf feel that leads into a great percussive beat and chanting. There’s also a classic exotica feel follows the Spanish-esque guitars and trumpets. “Walking From Juarez” offers a sneaky spy groove with occasional spooky touches and Spanish(?) singing, while the energetic “The Dance Of The Crustraceans” offers bouncy and speedy percussion that sounds like scuttling crabs. “The Kiss Of Ku” has a low, spooky build that gradually rises with backing percussion that later gives way to a catchy Spanish guitar beat and other light touches. This album’s version of “Krakatoa” is definitely different take on the track heard in their debut album. “Copper Locked Nymph” desperately needs to be in an old school, larger than life James Bond epic, especially due to the big second half. This time around, “A Most Excellent Flying Death” has a fast paced, surf-style opening with mild percussion and horns. While the original used the sounds of a car chase (and crash), this take focuses purely on the music. If you want to introduce a ska fan to Clouseaux, make sure to play this track for them. This version of “Reum With A View” is longer than the original and although it retains the soft, nightclub-style opening, there’s also fantastic solo and sax work along with a sneaky/dark undercurrent. In “Noctopia,” exotica takes center stage in this surf/Tiki mix, with plenty of cymbals and other examples of exotic instrumentation. Finally, “Lost Lagoon (Reprise)” is a shorter, more subdued take on the first track. 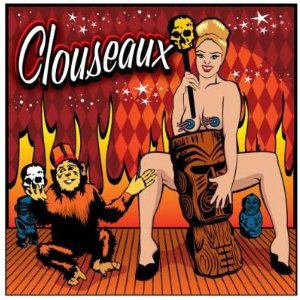 In addition to its many guest performers (Jerry Sanchez, Daniela Freidl, Will Crux and Paul Peacock), Beyond Good and Evil also features a ton of samples from vintage ads, Diamonds Are Forever and the Vincent Price classic The Pit and the Pendulum. Thanks to its “climbing” piano work and futuristic conga/surf fusion “The Kitchen of Tomorrow” has a very 50’s cartoon-style feel. “Hunt of the Savage” effectively uses fast bongos and surf guitar work with vocals and a Spanish trumpet while the surf stylings of “Genie vs. Genie” are somewhat slower and the Spanish feel is gradually introduced here. “The Awful Green Things From Outer Space,” inspired by the board game of the same name, features plenty of reverb-heavy guitars and electro-spacey sounds that provide a sense of menace and something approaching. “Paraiso” offers a slow neo-exotica feel with its slow drums, animal calls, vibes and
steel guitar work while”The Monkey With The Golden Fez” is a more frenzied track full of bongos and surf guitar work (along with plenty of screeching monkeys). “Exhuming Elizabeth” features a creepy surf guitar and drums and “Tango de los Muertos” lives up to its name with its sinister tango feel. “Magic” utilizes soft, dreamy vocals and great guitar work for a Hawaiian feel, which can also be felt in the Spongebob Squarepants-esque reverb work in “The Girl From Atlantis.” The vibraphone is easily the star of “Beyond Good and Evil” and is nicely complimented by the bongos and guitars. Soft, sad piano work starts off “Catalonia,” but the mood improves as string work enters the picture. Everything about “Jungle Witch” is amazing, from its creepy, guitar-based introduction to the amazing saxophone work (along with the use of mystical-sounding chimes). For the grand finale, “The Toy Store of Tomorrow” offers a Spanish flavored sense of running around, along with trumpets, laughs and a slide whistle!

If their first two major albums focused on a general introduction to their varied styles and exotica respectively, Beyond Good and Evil focuses on their unique guitar stylings. No matter which one you pick up, you’re sure to have a great listening experience. Although their last CD release was in 2006, Clouseaux is anything but inactive. In fact, they have three limited edition vinyl 45s coming out this year. They also have a more overtly horror-related side project, but that’s another story for another time…

Special thanks to Clouseaux for the review copies!