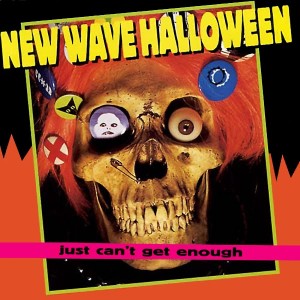 I was listening to spooky music long before I started up 6ftplus, the podcast of spooky music and more. Specifically, I tried going an entire October in 2006 with listening to nothing but horror-themed music. It didn’t work; I had to get some non-horror music into my system after three weeks because my tolerance was that low. Nowadays, you’d be hard pressed to catch me at a time where I DON’T have some horror-music on my person.

Even after a good six years of trying, I wouldn’t say I’m an expert in horror music; so imagine how I was when I started out. I had no clue what to listen to beyond the Misfits, a few Psychobilly bands I knew and the collection of Necro-Tone Records I picked up from a prior year’s Drop Dead festival.

Despite all the illegal blogger accounts held by South Americans and the now defunct ScarStuff blog, I never came across a copy of the New Wave Halloween compilation. There’s good reason for that.

This is the worst Halloween comp out there.

It’s not bad because of the music. In fact, this collection features some really good bands. But the song selections show that whoever put this JUST CAN’T GET ENOUGH release had no idea what they were doing. It’s a slipshod release that doesn’t deserve your time. If anyone gives you this as a sincere present, you’re expected to not talk to them for a good sixty days, until the stench is cleansed from your friendship.

First off, for a NEW WAVE Halloween comp, all but one or two of the bands on this release are NOT New Wave. Dave Edmund’s inclusion might be the only justification for the label and the Comateens covering the Munster’s theme but look. You have punk, you have goth, you have whatever the hell Mudhoney is, you have alternative rock. These are not New Wave. Maybe if you want to lump Oingo Boingo in there but c’mon. Have you seen ‘Forbidden Zone.’ Go watch that and tell me that Oingo Boingo is New Wave.You won’t because you’re smart.

This album came out in 1998 so it wasn’t like some Eighties exec was trying to capitalize on something hot. I’m not even a fan of New Wave and I feel cheated at this comp.

But let’s get into the music. You have a Roxy Erickson song, Dave Edmund’s rocking song about The Creature, “Pet Cemetery” by The Ramones and “Dead Man’s Party” by Oingo Boingo and the aforementioned Comateens cover of the Munster’s theme which is passable. Dream Syndicate are on this album because why not? The rest of this album doesn’t need to be and here’s why.

First off, the creators of the disc make an instant faux pax. Don’t start any compilation with “The Time Warp.” It’s a bit of a risk to INCLUDE it but to start off? Even ‘The Rocky Horror Picture Show’ built up to this bit of whimsical nonsense. It’s not the song to start the party, but one that’s played about half-way through the night when everyone’s a bit more susceptible to dropping their inhibitions. It’s a song that gets everyone excited because of the ludicrous steps and everyone joking about the “pelvic thrust” that really does drive them insane.

But at its core, this isn’t a Halloween song but a song that only gets played at Halloween. This is because there’s no real context to be busting out ‘The Time Warp’ any other time at the year. It doesn’t really go with Fourth of July, St. Patrick’s Day or Christmas, unless you happen to be a fan of RHPS—or one of those people who are really into Rocky Horror. You know who you are. Hello there!

Really, it’s not a Halloween song. It’s a song that just fits into the straight, non-horror world best around Halloween.

I understand why anyone would want the B52’s on their album. The B52s are a fun band who defy genre and always seem to be perfect for a party atmosphere. Can you imagine how awesome your Office party would be if the B52s were there? If I can book the B52s at my Funeral, I will decay knowing that I went out on the best possible way.

But, really. Let’s try to imagine the decision making process for including this song on the comp: “The song has the word ‘Devil’ in the title. Include it.”

I first heard this song when Matt included this in his Halloween playlist back over at X-E, which I can’t fault him but let’s call it what it is – this song has nothing to do with Halloween. It’s catchy, enjoyable and demonstrates how wonderful and weird this band is, was and forever will be.

I think whoever greenlighted this song’s inclusion never really listened to the B52s because they’d realize that they don’t belong in ANY genre. ‘Rock Lobster’ is one of rock’s most bizarre songs and its creation and subsequent AIRPLAY is a miracle in itself. The fact that most people might associate ‘Love Shack’ with this band is a crime because Akua knows these guys are much, much weirder than that. Including them here on this comp seems to do them a disservice. It’s almost insulting.

Here, for your pleasure, is a faithful recreation of the thought process for including this song. “The song has ‘Halloween’ for the title. Include it.’

In fact, apply that to this song and ALL THE OTHER songs titled “Halloween” on this comp. There are six of them. Two of them are appropriate (the well known releases by Siouxsie & The Banshees and the Misfits) The others? Not so much.

Including Deady Kennedys’ “Halloween” in this comp is akin to making sure “A Modest Proposal” by Johnathan Swift gets included in a cookbook. On the surface, it seems TOTALLY A SMART IDEA but when you get into the meat of it, you find that neither work’s intention is what it seems.

Dead Kennedys were a politically conscious hardcore punk band out of the Bay Area back in eighties, around the time of The Germs, Black Flag and more. They’re not a party band. Lead singer Jello Biafra once said he wanted to bring the horror show of Alice Cooper but with the truth of the socio-political landscape of the time into music. Still, with lyrics like this, the song is a downer:

“You’re still hiding in a mask
You take your fun seriously
No, don’t blow this year’s chance
Tomorrow your mold goes back on”

Dead Kennedy’s “Halloween” is about the hypocrisy of the idea you are only allowed to be yourself one time a year. It’s about being who you want to be. Do you feel you are your most when dressed as a clown? Then dress like a clown everyday. This theory has led to Juggalos, Bronies, most of Japan’s pop culture and modern American politics.

So how does Mudhoney end up making a version of the song? Seems Mudhoney sent a demo to Sonic Youth, who suggested that the bands cover each other for a split/single. Sonic Youth covered Mudhoney’s “Touch Me, I’m Sick” and Mudhoney covered “Halloween.” Both version of Sonic Youth’s ‘halloween’ are on the New Wave Halloween comp. They’re after each other.

That’s unacceptable. It’s complete laziness to include both of these songs on this collection. There is no creativity in this sloth is at the core of what offends me about New Wave Halloween. I like the Sonic Youth version of the song (I really don’t like Mudhoney, can’t get into them) but including the same song (albeit by different bands) right after each other? Are you trying to entertain anyone with this album?

Whoever includes this on any pro-Halloween comp is—well, I want to think they’re idiots but it might just be that’s the point?

The song SOUNDS creepy, which was probably the intention. But the lyrics indicate otherwise.

Remember back how Dead Kennedys scolded you for not “celebrating Halloween” everyday? They weren’t telling you to actually carve Pumpkins, trick or treat and watch “The Littlest Witch” for twelve hours. They were saying for you to live your life the way you want, bucking social norms. That is what “Everyday is Halloween” is about.

Back before he required triple-bypass surgery to repair the damage of doing the equivalent of Pablo Escovar’s weight in drugs, Ministry’s Al Jorgenson was kind of a whiney electro-goth whose anthem “Everyday Is Halloween” would be soon misunderstood by the masses it was making fun of.

The idea behind the song was that goths, often posed the question “why are you dressed like it’s Halloween?” would relate to the concept that their clothing, their lifestyle, their attitudes are often misunderstood by people who would just glance over their surface and make the dumbass assumption that they just really, really like Halloween. This is more about accepting who you are than actually celebrating October 31st 24/7/365.

So whenever someone includes this song on a Halloween playlist, it’s not less a “Halloween is so awesome, let’s have it everyday!” rally cry but more of an ironic playing of a song that says “ those who think we celebrate halloween everyday. Let them think that. We like creepy shit and they can go off.”

So. In total review: Don’t buy this. This is a collection of GOOD SONGS but the piss poor effort behind its creation doesn’t deserve your time or effort. And used copies are going anywhere from 5 to 25 bucks on Amazon. That’s frightening. Get the songs on their own but don’t reward bad behavior.

Bad Behavior has blocked 828 access attempts in the last 7 days.