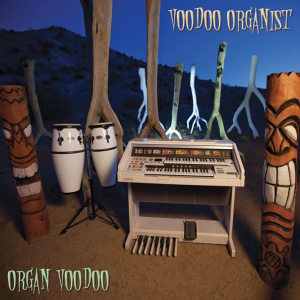 Ever since the overstuffed first installment of the Freaky Tiki Surf-ari back in 2010, I’ve always made a conscious effort to keep my reviews limited to two exotica albums and two surf albums per year. But when Dionysus Records told me about this album, I knew I had to make an exception. How can anyone hear the Voodoo Organist’s previous work and not be immediately intrigued about how he’ll handle an exotica album?

Scott Wexton got his start playing music at age ten. That’s when he started playing the organ at church. Flash forward to the 90’s, where his musical duo with Christopher Gwizdala, Tribe, gained new members and became known as Batterie:Acid. Even when they disbanded in 1995, he couldn’t stay out of the music biz and soon found himself briefly performing with Today Is the Day. After a few years of “regular” work, a near death experience in 2001 made him realize he had to live his dream. The following year saw him debut as the Voodoo Organist and the rest is history. When it comes to musical influences, he has everything but the kitchen sink. It would be easier to list what few musical genres he doesn’t draw from!

The mellow “Mojave Midnight Moonlight” is a delightful mix of vibraphone and other percussion, along with some theremin work thrown in for good measure. I love the bongo work in this, along with the organ work. “Dry Martinis and Wet Bikinis” is a swinging and jazzy number which would be right at home in an old school spy movie. The snapping fingers, light snare drum strikes and sneaky vibe work mesh well with the organ. Guiros and an unearthly feel show up for “The Chow Chow Cha-Cha” while vibes get to show off in the peppy “Bombay Beach Bondage Boogaloo.” “Rattlesnake Rhumba” is one of my favorites and one listen will make you understand why. Its classic exotica feel is built around bongos percussion, which go nicely with the returning theremin and organ. The very fast and lively “Violent Pillage” knocked me for a loop. You simply have to hear this cleverly named track in order to appreciate it.

“Whiskey Tango Fox” certainly lives up the to “tango” part of its name. There’s plenty of musical variations to help keep this interesting. But even if there weren’t, it would still be a great listen. “It’s Smokey” is another song with a “spy” feel which instantly transports the listener to a smokey bar thanks to its soft and light mix of cymbals and vibe work. The fast and fun “Stomp That Bug” offers plenty of organ (of course) and drums while “Steely Tiki/Prog Grog” uses guiros and vibes masterfully. “Detroit It” musically melds drums, theremin work and maracas. It also flows nicely into the pleasant percussion of “Desert Dream Scene.” Just hearing it lets you know the album is at its end, but it isn’t mournful by any stretch of the imagination.

The Voodoo Organist has always described his style as “something like the house band in Satan’s Tiki Lounge” and that’s never been more true with this album. Have you ever heard the expression “lost in translation?” That’s how I feel about how my review handles this release. I know I’ve made similar statements about how select tracks from this year’s Freaky Tiki Surf-ari must be heard to be truly appreciated before. But my saying that has never been more true when referring to this particular album. It’s a unique musical mix unlike anything you’ve ever heard before and you need to buy it now!