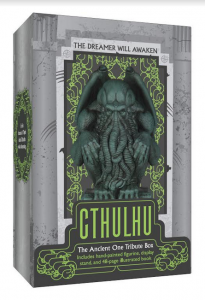 Have you ever seen little desktop gift sets at your local book store? Although the subject of this review is similar to such products, I think you’ll soon agree with my view that Chronicle Books went the extra mile. “Cthulhu: The Ancient One Tribute Box” contains a Cthulhu statue, 48 page illustrated book by Steve Mockus and display stand. I especially liked the translated and untranslated “In his house at R’lyeh, dead Cthulhu waits dreaming” quotes on either side of the box. Detailing is also a major feature of the statue, right down to the alien writing on all sides of the base of the statue. Which is to be expected given how it was sculpted by Gentle Giant. Getting back to the packaging. the previously mentioned stand actually acts as the back of the detailed packaging. So keep that in mind when you’re opening this. The statue is secured very snugly in its plastic casing, so I recommend pushing from the back of said packaging at the base of the statue after removing the plastic ties holding it in place. If you’re careful, the base should pop up and give you enough room to grab onto so you can pull out the statue.

The paperback book is hidden inside the display stand itself and I imagine most diehard Lovecraft fans will leave it there after initially reading through it. It seems more intended as a beginner’s guide to Cthulhu, although diehards might enjoy some of the images. In addition to Lovecraft’s sketch of the Cthulhu idol he described in “The Call of Cthulhu” (which inspired this statue), there are also images from comic books, RPGs and even some Etsy products! So unless you’re planning on giving this to someone who’s only vaguely familiar with Lovecraft’s work but is interested, I imagine you’ll only be sliding it out when curious guests ask what the deal is with the octopus-headed guy.

Let’s compare the publicity image with some pictures I took of the idol in all its glory: 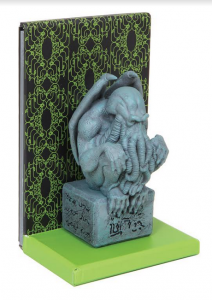 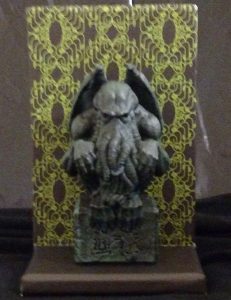 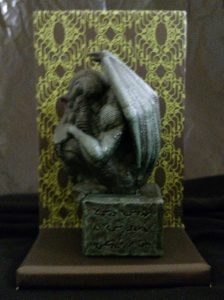 As you can see, the statue is actually much darker than it is in the promo shot and the display’s base is black rather than green. I actually prefer it this way. One of the reviewers on Amazon posted some shots of it next to a lighter in order to give a sense of scale, but I opted to use something everyone would have around the house: 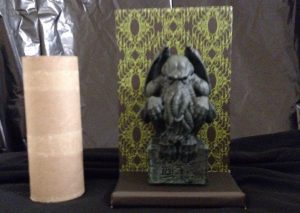 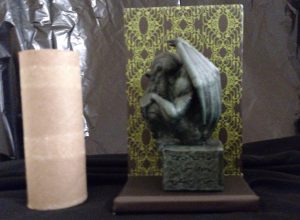 I probably should have put the tube next to the statue without its display stand, but I think you still get the idea. It’s 4.5 inches of solid resin, so it’s only half an inch shorter than your standard action figure. It’s fairly heavy for something that size and could easily be used as a paperweight. I imagine others will use it in role-playing game sessions or staging a Lovecraftian tableaux. My favorite review even brought up the idea of buying two and using them as bookends! But given the season, let’s talk about using it as a Halloween decoration or as a prop in a haunted attraction.

Although you could easily use it as set dressing in just about any kind of spooky room, I think this deserves something better. Imagine it on display in an “art ghoulery” with other strange statues and creepy paintings. Having some small flaming containers or flickering candles (both with fake flames, of course) on either side would be a great effect. Although my flaming cauldron prop was too big to include in the picture, here’s how the light from it makes the Cthulhu statue look in the dark: 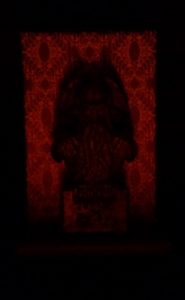 Please click on the above to get the full size image, as it looks incredibly cool. I chose to include the display stand, but you can easily just use the statue. It would look even better with a prop Necronomicon in front of it. Since visitors to your haunt might be tempted to walk off with it, either set up the scene behind a barrier or have a hidden assistant in a black hooded robe ready to chase out those who dare disturb their ritual.

I have been looking for a Cthulhu idol of some kind for ages and the affordable “Cthulhu: The Ancient One Tribute Box” is an (elder) godsend! I love how it actually looks like a statue rather than just a depiction of Cthulhu in miniature like many other such products out there. Let’s not even get into all the cutesy stuff. It’s not too big and not too small. In other words, it’s just the size I want at just the price I want to pay!

UPDATE: If you (somehow) needed another reason to purchase this, here’s a cool customized version!

Special thanks to Chronicle Books for the review copy!