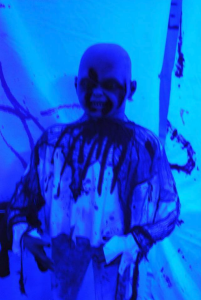 Nightmare Marlborough has already made quite an impact despite having only been running since 2013. They briefly coexisted with the Haunted Woods Food Drive until said attraction’s demise in 2014. Thankfully, Nightmare Marlborough has not only continued the tradition of collecting food to help the less fortunate but they were also given numerous props from the Haunted Woods Food Drive to use in their attraction. They have even built up enough of a following to allow them to raise funds from Kickstarter campaigns and selling custom shirts. This lets them keep improving the haunt year after year without having to charge a cash admission fee. This also lets them keep changing the theme every year. I visited when they tackled the popular asylum theme in 2015. In addition to the house featuring numerous spooky decorations in its windows, the front yard was all decked out like a graveyard and filled with props from Haunted Woods Food Drive. Seeing the electric chair and bloody fridge again was a nice treat while the lighting and props created especially for Nightmare Marlborough were also well done. This also applies to the props in the haunt. I saw a “skin curtain” which I thought was an expensive, professionally made prop but it was actually completely homemade! I barely managed to catch a costumed actor sneaking up behind me while waiting for the tour to begin. As I suspected, this was a good indicator of the things to come and I wasn’t in for a lazy haunt where people in masks randomly pop out and yell “Boo” at you.

The tour was led by “Nurse Ratchet” (who wore makeup which looked especially spooky under a black light). Her matter-of-fact delivery about the facility and its inhabitants greatly aided the overall mood of the haunt. I vividly recall her pointing out a guest book in the first room and expressing disappointment about the pencil being missing. She never came out and said it directly, but I assume this was done to plant idea of being attacked with it in peoples’ minds. Having the last name in the book be “Hannibal Lector” was a great touch as well. The rooms were often filled with lots of little details and references to horror movies. In the rare cases where detailing was sparse, the use of simple white sheets as walls was enhanced by the use of bloody writing and black lights. There were plenty of misdirection and varied scares from the performers and even some interesting twists on asylum haunt staples like the shock treatment room. The free candy in the haunted pharmacy didn’t hurt either!

Another aspect of Nightmare Marlborough I found to be impressive was how accommodating they are. As the regular haunt might be too intense for some children, they offer a toned down version with the lights on at certain times. I understand that they even have kids acting as the tour guides to make things even more reassuring to younger visitors. But they also show plenty of courtesy to adult patrons. One employee was even nice enough to hold the leash of a dog while the owner went through the attraction! Parking can be a bit tricky since this is held in a residential neighborhood. I wasn’t entirely sure if it was okay to park where I did, but thankfully the length of the tour let me get out said spot quickly enough (without feeling like it ended too soon) even if it wasn’t a designated parking spot. I wish I had asked someone there since I’m sure they would have been happy to help me.

Sadly, there were a few flaws. The haunt’s thin plastic outer walls meant you could hear everything in advance while waiting in line. While hearing the screams was a good mood-builder, hearing the tour guide’s narration and getting spoilers wasn’t. The cover at the exit of the haunt kept getting lifted up by the wind and exposing the last scene. This was worsened by the bored actor’s decision to make music with the props while he waited (but he did do a great job once people came into his area). Situations like this make choosing a rating especially difficult. Training actors is relatively simple, but changing the structure of a haunt isn’t. Due to the nonprofit nature of the event and how it has to be in a temporary structure, using heavy walls might not even be possible. Zoning issues might be a factor as well. If this is the case, perhaps they can try adapting future guide scripts to avoid this issue (assuming they don’t decide to stop using guides). But that might not be necessary. For you see, Nightmare Marlborough is going to be expanding its layout and seems to be adding new walls to the mix. So their 2016 version of the haunt could potentially offer an experience free of the issues it had in 2015. So don’t hesitate to head over if this piques your interest because I’m sure it will be worth it!

Final verdict: 3 skulls out of 5 (with a potential for 3.5 to 4 skulls with the upcoming expansion)

UPDATE: I just had to make a return after hearing about the expansion. It is indeed bigger and better for 2016 and Nightmare Marlborough is easily one of the best home haunts I’ve ever been to. They even give you two free pieces of candy now! I went on opening night towards the tail end of its operating hours. But the performers were on top of their game and were just as energetic as people who just started haunting for the night after several days of practice. Although I could hear plenty of screams, I didn’t hear any of the guides’ dialogue and couldn’t see into the end of the haunt like I could last time. The only spoiler was hearing a certain noise which made a certain kind of scare obvious. This year’s “Nightmares” theme allowed for a variety of scary scenarios, including a brief return to last year’s asylum theme. There were plenty of creative uses of light and darkness (although it got a little too dark at one point). In addition to my nearly blundering into an actor at said point, it made me wish it had the same level of detail on display in other parts of the haunt. But I’m sure they’ll make further improvements based on customer feedback like this in the years to come. But please don’t let that keep you from heading to 111 Brimsmead Street, as there’s so much spooky fun to be had! I give the new version 3.5 skulls out of 5.

Special thanks to Nightmare Marlborough for use of the image!

Bad Behavior has blocked 848 access attempts in the last 7 days.