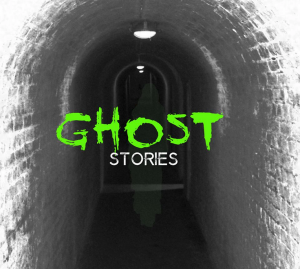 Sam Haynes is busy as usual this year. In addition to the release of his new album Something Wicked and its sequel Something Wicked II, he has also launched a new side project called Scaretrax. Scaretrax is designed to provide people with royalty free music for their projects at an affordable price. He also offers to write custom music on demand through this service. The only problem is how scheduling issues prevented me from reviewing any of these! Thankfully I was able to cover one of his favorite albums instead.

“HAunTS” starts things off with gong strikes and an intentionally distorted buildup. Soft, distant wordless female vocals and speedy piano work usher in more distortions and a great beat. Sadly I’m unable to place the origin of the sample where a man asks someone if they believe the dead can come back to haunt the living. You could try dancing to it, but it just works so much better at scaring people. “GhoST stoRiES” has a soft, creepy opening despite some lighter touches. I love the dark drum machine beat and the synth work makes this an excellent mood builder. Speaking of which, the ethereal synth segment is a great touch which makes you think of the unknown and fear at the same time. Other aspects of the music remind me of something floating around, so why not use this with an object that’s seemingly suspended in midair? “ThE ChILLS” reminds me of light strumming music at first. But the dark synth tones constantly lurking underneath prove everything is not so innocent. The piano work and other great background touches, like its sneaking feel at times, help this track give the listener its namesake. It’s not as intense as the previous tracks, but I think this makes it all the more effective. You will believe chimes can make you nervous! The lengthy “LoST HeARTs” is another track with a wonderfully slow and moody opening buildup. The almost futuristic electro touches go nicely with the piano work and there’s a creeping feel to the lighter tones and music box-like parts. However things get much darker in feel when a vaguely orchestral version of the music takes over. There’s so many layers to Sam’s work that I can’t possibly cover everything in this track. After the long period of silence which starts “The MiDNiGHT SHow,” the listener can make out the faintest of music, which soon builds in both volume and variation. There’s an underlying sneaking feel, which soon transitions to dance beat with tambourine-like touches. The drum machine adds to the dance feel while the wordless female vocals keep things spooky. It’s great for Halloween parties, entertaining haunt patrons in line and in haunted club scenes. I’ll be listening to this all year ’round! The chilling opening of “spELLboUND” is quickly overtaken by a dance beat. There’s some light music box-like chiming at times in addition to the ghostly vocals. I love the other little electro touches Mr. Haynes threw in for good measure. The majority of “The OTher SiDe (Prelude)” is made up of a lengthy period of near silence. Thankfully this track is on the short side, so it doesn’t take too long for the otherworldly space noises to be fully audible. If you time things just right (or if you use this with a motion sensor), this could also let you add an extra surprise to your haunt’s alien room.

“The OTher SiDe” has a much shorter silent period, then steady synth tones form the backbone of track. Said backbone is soon overshadowed by a more dance-like drum machine beat and mild electro touches. Careful listeners will notice how this references material used in earlier tracks. I’ve actually danced to this and feel zero shame. There’s good sized period of near silence at end too, which admittedly leads nicely into the next track. Said track is “MidNight Gets CloSER,” where soft piano work gradually builds up to a most interesting use of bells. They might remind you of jingle bells, but they’re anything but jolly. The heartbeat-like touches make this soft ‘n slow track especially eerie. Said touches also make this perfect to play in a room where a ghost with a visible beating heart can be seen. The heart is actually one of those inexpensive flashing red lights used by joggers for night runs. Depending on the strength of the light and type of fabric you use for the ghost, you might have to mute the light somewhat. This can be accomplished by placing the light (with string attached so you can hang it) in the middle of a wax paper circle and gluing another circle over it. You only want to glue the edges while leaving a space for the string to go through. You might have to repeat this process until you get the level of visibility you want. But you can skip this if you want the light to be strong enough to illuminate a rib cage hidden in your ghost. “tHe RetuRN” starts off with a sample I actually recognize. It’s Dr. Sangre’s speech about having returned to the land of the living from King of the Zombies. There’s lots of amazing synth work on display and it even reuses this album’s most popular tune. Not that I’m complaining, mind you. This track is not too scary and not too dance-y. It’s the best of both worlds. Especially the piano! “FeAr Of clOWns” uses the same sample from One Step Beyond he went on to use in the opening track of The Incredible Dark Carnival. The bouncy faux calliope is aided by dark synth touches (and even an incredibly effective solo). “CaRNiVal featuring Ghoulshow” continues the carnival theme with a sample from Carnival of Souls. The carousel feel is fairly restrained, which compliments the sense of danger skulking around in the background and wordless vocals. There are some fantastic theremin-like eerie notes and some nifty distortion as well. Soft drum beats and an extra funky dance beat suddenly take over for final leg of the track. Track 13 is appropriately called “13,” where musical distortions abound. The use of a gradual buildup is quite appropriate seeing as how this is the album’s longest track. It’s dripping with dread and despair, along with numerous synth variations. It gets more lively halfway through, but still retains a certain sense of menace. Then it cranks up the speed (and evil) and adopts an intense chase-like feel. After the echoing sample about ghosts, a slow fade of lighter music flows into the final track. Soft, light synth tones back the occasional stab of heavy darkness in “GrAVE SeCReTS.” Something like “soft and light music” might not seem scary just from reading those words, but you’ll understand once you hear this.

Ghost Stories manages to be more intense than his other albums and yet still retains all the elements Sam Haynes fans have come to expect from his work. Don’t let the title fool you, the material on this release can be used with more than just ghost scenes. The lengths of the tracks are all long enough to support individual looping. This is especially true for the 6 and 8 minute tracks! You could easily score an entire garage haunt with one of those. You could play the album on repeat this year, but it might be confusing for trick-or-treaters if the circus stuff plays and you don’t have any killer clown props on display. But that’s an easy fix since you can either add some or program your audio player of choice to skip those tracks. My only complaint is the lack of bonus tracks for those who prefer not to use samples in their setups. Which is a pretty minor complaint, all things considered.

Special thanks to Sam Haynes for use of the image!