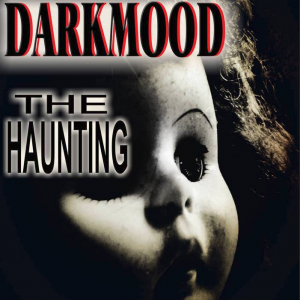 The album description for The Haunting bills itself as “one of the scariest albums of all time.” This is a very bold claim and there’s no shortage of things making promises as being “the scariest” and failing to deliver. Which category does it belong in? Let’s find out!

The opening of “House of Horrors” uses tuning sounds and plenty of synth work to create an eerie, off-putting experience. A creaking door is heard, along with electrical equipment and wordless female vocals. Echoes and screams soon follow as the track takes on the feel of music from a horror movie. You’ll know what I mean once you hear it. A pounding buildup leads to breathing and scattered whispers, along with distorted screams and moans. There’s also some vaguely sci-fi touches, string work, monster noises and too many other things for me to even attempt to catalog. An electro beat takes over for a spell and is later joined by whispers, only for the scares to resume control in the end. This would be great for a mad scientist’s laboratory, especially if it is located near rooms featuring captured victims and caged monsters. “Scared” uses strings and LOUD pounding drums to create another track with a cinematic horror feel. This is followed by wind chimes, buzzing and other creepy touches I can’t place. I suspect this inability only makes things more unsettling. The track takes on a mournful feel before a monster is heard breathing, along with menacing whispers and other strange touches. Aside from the pounding and breathing, the track takes on a vaguely science fiction feel with its use of static, distortions and echoing vaguely spacey notes. Metallic distortions and a (brief) sci-fi undercurrent also turn up in “Within the Night.” Most of the track’s synth work has a has a John Carpenter feel, with the sounds of breathing and a faint heartbeat which come later adding to the effect. The buzzing noise is the background is soft at first, but picks up after some impressive string work is heard. Various electrical noises are heard, only for the disturbing sounds and Carpenter feel to eventually return. Closing the track with the distorted sound of a woman screaming was a perfect touch. This could work in an alien room or laboratory, in addition to both dark and chain mazes. You could even use it as the soundtrack for an entire garage haunt. The medium paced “Evil Comes” maintains a constant ominous feel. Don’t be surprised if you start to feel like something is after you while you listen. The sinister synths are aided by piano work, wordless female vocals, frenzied violins and heavily distorted talking. The music here really cranks up the feelings of evil and something not being of this world. So why not use it as the soundtrack for your haunt’s vortex tunnel? “All Hallows Eve” is fairly fast paced and comparatively light compared to the rest of the album. But keep in mind how “light” for this album is still darker than the music you’ll find on other artists’ albums. I don’t know what I love more, the piano work or its overall ambience of evil. Some sci-fi stuff appears about a minute into it but you can get away with using this in non sci-fi haunt setting. The way the swarming synths seem to surround you is an impressive effect. The fact its piano work sounds like something from a John Carpenter movie lets you use this in a slasher room, while the heavy static also allows for use in a room with a haunted television. Come to think of it, you can either use a television playing static as a prop in your slasher room or you can use the haunted TV effect I noted earlier with a mannequin dressed up as a slasher acting as misdirection.

I doubt I have to explain the significance of the title for “Redrum.” Synth work makes its way into the opening ambience and altered horns, along with some chime work similar to what plays when a movie character falls asleep and has a nightmare. The pounding notes and various effects eventually give way to a When Time Ends-style dance break and heavy static. The distorted screams and low, heavy synths make for a killer close. “Book of Blood” has a low opening fade up. Whispers and menacing music box synth notes give way to pounding music about midway through. The half heard and distorted whispers to “Get out” lead to speedy tribal drums and a violin outro. Given the name, I suggest using it in a room with a prop spellbook. Despite what the name implies, “Demon Doll” sounds nothing like the music one would expect to hear in a haunted nursery. The electrical zapping, synths, disturbing background noise and tuning see to that not being an option at all. It has a surprisingly catchy beat while its heavy use of distortions and scary strings live up to the first part of its name. The ending slam and evil voice should provide a nice extra scare no matter where you play it. Otherworldly ambience opens “Cabin Terror.” Is the wailing supposed to be the wind or spirits? You be the judge! The screech which comes later seems to indicate spirits (but it could be birds). Wind can definitely be heard next, along with music that might be somewhat peaceful in a different context. Well, at least before the distorted violin work comes in. The synth tones and vocals (you know which kind) mesh well with said violin. Monstrous sounds take over, complete with howls and echoing screeches. The heavy but trippy ending synths make for a most unique closing. This could easily work in a room set up to look like a haunted cabin scene. This also has potential use as the soundtrack to a theatrical séance also long as the room has a “window” implying there’s a forest outside. The introduction of “Into the Woods” is a mix of creepy sounds and synths which comes complete with unearthly screeches and ominous distortion effects. I’m very fond of how it uses string work to build up tension. A slam and distorted static take the listener to a segment with touches like the music from modern horror films. It overwhelms you with evil for the rest of its running time. Aside from a distant howl, most of the effects are disturbing because you can’t place any of them. The pounding beats dueling with tribal drums works wonders for the overall mood. Be sure to use this in a haunted forest, especially one with wailing trees. “Lost in Darkness” brings us more tribal drums, along with pounding synths and moaning tones. There’s even wordless female vocals at times! It picks up with a scarier feel once the disturbing chirps and other sounds join in. The drums get solos at times but work best when they’re paired with piano work. This is a must for your next dark maze and “The Howling” would work in either a werewolf scene or haunted forest. Its loud, pounding heavy synths and distant high pitched howls see to that. It has more focus on dark synths than the howls and it’s interesting how the howling gets so loud it sounds almost like a siren at one point. The tribal drums and synths create a sense of being chased, so you might want to time a scare at that point. Otherwise you can just let the intense synths reign supreme and fade out. The album’s final track is appropriately named “13.” The deceptively soft opening contrasts with its later focus on loud creepy synths and effects, complete with scattered metal clanks. Distortion abounds and women’s screams all have an echo effect. There’s also some callbacks to the previous tracks mixed in with all the new stuff! The tribal drums and breathing get supplanted by extremely heavy breathing that seems to close the album. Only for the surprise appearance of a woman loudly screaming acting as a jump scare.

Darkmood really outdid himself with this wonderfully unsettling album. It wasn’t just hype; The Haunting really does deserve to be in the running for recognition as the scariest album of all time. It’s easily the scariest album I’ve heard so far. Given how many of the tracks are over five minutes in length, looping individual tracks is no problem. There’s enough of a loose continuity of certain song elements to allow for looping the entire album as well. The only possible negative aspect of this release is how it might have too many sci-fi touches for those searching for pure horror. Playing other artists’ ambient music on Halloween can create an atmosphere of creepy fun for trick-or-treaters, but you should play Darkmood’s The Haunting if you want to make them too scared to even come near your house. That way you can keep all of the goodies for yourself!