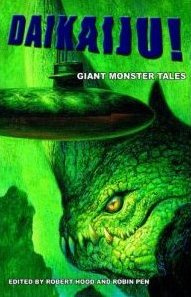 You can find horror anthologies devoted to just about every subject these days. Ghosts, vampires, werewolves, zombies, aliens, Frankenstein’s monster, H.P. Lovecraft, slashers…the list goes on and on. But one subgenre was sadly neglected in the world of horror anthologies: good old fashioned giant monster attacks!

Thankfully, the fine folks at Agog! Press took notice and corrected this terrible oversight with a trilogy of books. Originally intended as a one-off release, the amount of submissions for Daikaiju! Giant Monster Tales was so great that the extra material was split off into two other books: Daikaiju!2 Revenge of the Giant Monsters and Daikaiju!3 Giant Monsters Vs. the World. Although the cover art and contributing authors change from book to book (the above cover was made by Bob Eggleton), the fact that they’re edited by Robert Hood and Robin Pen remains the same throughout them all.

Thanks to Google Books, you can read lengthy previews of all three tomes. What awaits you? Complete stories and snippets, both serious and comical featuring original creations and, for all intents and purposes, famous daikaiju with their serial numbers scratched off (if you catch my drift). Some give their monstrous creations names and others opt to leave the creatures unnamed. I prefer stories that opt for the second method, as I feel it reflects the mysterious nature of the gigantic beasts that suddenly spring forth from the dark places of the Earth to trample cities while terrified citizens flee rather than concern themselves with naming something.

So please, give these books a try. I’ll think you’ll be pleasantly surprised at the sheer number of ways there are to tell a story about giant monsters (not unlike my surprise when I found that the first book had a story featuring Frank Wu’s “Guidolon the Giant Space Chicken”). There’s radiation, magic and even a zombified Paul Bunyan!

Daikaiju!2 Revenge of the Giant Monsters

Daikaiju!3 Giant Monsters Vs. the World

If that isn’t enough, here’s Robert Hood’s companion website and another story collection which I suspect was inspired by this series.

UPDATE: There have been some new kaiju story collections published since this article was written! The Mammoth Book of Kaiju features a mix of new material and selections from all three volumes of Daikaiju! and Kaiju Rising: Age of Monsters combines new material with selections from the previously noted anthology.

Special thanks to Robert Hood for use of the image!

Bad Behavior has blocked 1826 access attempts in the last 7 days.