[As you may recall, we once got in touch with one Mr. Bertram Bertram, soliciting his expert opinion and analysis for our readers. As one of the foremost Haunt Experts around (you may continue to find his expertise readily available here), we were incredibly pleased to hear back from him again. He discusses his absence and continues a fascinating dive into the world of Haunts. We are once again honored to present his writing here at GdL16.] 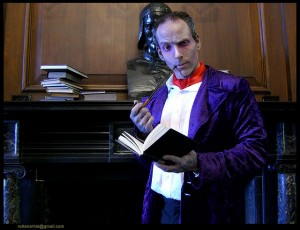 I apologize for my grossly late update to this continuing series of writings on the haunt industry that I began what seems like so long ago.  At its inception, the intention of this subsequent piece was to be an investigation into the history of the haunted attraction in America. This indubitably required an exhaustive inquiry so I turned up my shirt cuffs, donned my Indian silk writing jacket and dispatched my manservant, Walter, to the manor library to retrieve the necessary books and periodicals post-haste.

After an eve without dinner, the next morrow with no breakfast, followed by a missing brunch, I suspected that something might be amiss. I ventured to the library wing fearing that Walter had inadvertently stumbled into the forbidden tomes section. Obviously, there are strict rules stating that no one but myself may access those shelves, but any man, especially one of lesser social strata possessing the weak constitution characteristic of their ilk, can fall prey to the temptation to open such intriguing compendiums as The Readers’ Digest Series of Albertus Magnus or My First Little Necronomicon–gifted to me by my wet nurse and still cherished for the sentimental value.

Thankfully, my fears were unfounded. I located Walter well away from the stygian stacks. He had been searching for a particular folio when an entire shelf of National Geographic magazines somehow overbalanced and cascaded down upon him in a veritable avalanche of yellow framed covers. I found him trapped under a heap of the gelwaz bindings, bruised and dehydrated but otherwise uninjured.

What I found particularly odd about this event is that I have never subscribed to National Geographic Magazine. I have developed a theory, however, that the magazines spontaneously generate in the presence of any large group of books left solitary for some extended length of time in much the same way that maggots appear on meat left to rot. It’s a theory that I shall have to devise a means of testing at a later date.

After freeing Walter from the tomb of tomes amassed upon him as a cairne memorializing what surely would have been his place of final rest if not for my intervention, I directed him to immediately take a well deserved fifteen minute rest before preparing the afternoon supper. He was appropriately grateful. I have to say that the meal he served that evening was not quite up to his usual caliber of cooking, but due to the events of the day I decided not to dock his pay as a lesson in standards. Never let it be said that a Bertram is inconsiderate to the domestic classes!

Of course, my research into the history of the haunt industry will have to be delayed until I can return the library to order and procure some form of preventative safeguard against future journal genesis. In lieu of my comprehensive history of haunts (to eventually be collected in an anthology), I have directed my attention to a different aspect of the haunt industry with which I will enlighten you, the gentle reader. The topic for my review in this post is the nature of the expectations that exist between haunts, haunters, and guests. Specifically, I will review the guidelines for guest behavior at haunted attractions and the curious reason that necessitates these rules.

The Rules for Guest Behavior

Any guest who visits a haunted attraction will see posted at the entrance a list of rules and regulations for the attendees. In the modern age in which we live, these rules will often be posted on the attraction’s website. Further, certain of the rules will be read to the guests by an actor or sometimes given by a video recording before the guests enter the haunt proper.

These rules are shared by all haunted attractions and have very little variation. The following list is a distilled version of the most common rules in their fundamental, broadly worded form:

Certainly, any haunted attraction will have posted a much longer list than this trio of tenets. But most regulations can be distilled to these three basics.  I recommend this video from the Wells Township Haunted House as a particularly entertaining example of a more comprehensive set of haunt rules.

The basic haunted house statutes reflect the difficulties common to any public venue that caters to large groups of people who are in a festive mood. Guests at haunted attractions are not necessarily more prone to destructive behavior than guests elsewhere.  Haunted attractions, however, do have difficulties peculiar to their own unique form of entertainment.

Do Not Touch Anything

I once witnessed an adult male patron sprint to this animated, hanging-body prop,  and start lewdly humping the prop’s leg. The prop automatically triggered and flailed violently. The half-witted patron received a swift kick to his groin which amused his compatriots far more than his own bawdy antics.

Haunted attractions have a vast array of intriguing props and set decorations with which guests would understandably want to interact. A guest might assume that a haunt owner would be concerned that an expensive prop might be inadvertently damaged by the guest who wishes to handle it. But what most people fail to realize is that the real danger is not to the props but to their own safety.

Many animated props at haunts are made to be concealed so as to create the most surprising effect possible when they are activated. These props are built on heavy steel frames and are most often powered by pneumatic pistons that operate on hundreds of pounds of pressure. When released, the pistons can propel the props with surprising speed. A particularly dramatic example is featured in this video from the excellent Scare Factory in Ohio of a large character that bursts out of a disarmingly normal dresser.

The foolhardy guest who decides to open a dresser drawer or even just lean up against the piece of furniture could receive a potentially painful surprise.  Experienced haunters build in safety areas blocked discreetly by set decorations to keep guests out of harm, but human foolishness always seems to find a way to stumble into danger.

Sadly, I must postpone further review of the rules for guest behavior for now. It seems that I hear Walter’s shuffling step approaching the study in time to deliver a nightcap before I retire to my bedchamber. I shall return ere long with part two of our little symposium of the strange. So, for now, gentle reader, I must bid you adieu.