It Came from Amazon III 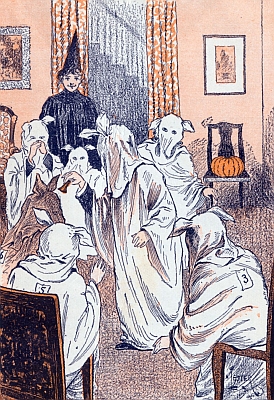 Last year, I had high hopes for the 2011 installment of my “Vintage Halloween Insanity” series. Not only had I found a walk-through description of a 1915 haunted attraction, but it was quite possibly the most ludicrously dangerous of the old Halloween articles I had ever found after it seeming like I had run out of material. “The Cave of Death” certainly lived up to its name. Sadly, that was not the case this year. Don’t get me wrong, I did manage to scrape together enough material to form this article, but it doesn’t have quite the same impact as the previous year’s installments. That said, it is still interesting reading.

While browsing through my usual sources for “Vintage Halloween Insanity” fodder, Popular Science and Popular Mechanics, I noticed that most of the Halloween–related stuff was rather normal when compared to past years’ entries in the series. Although not technically a Halloween article, this moving ouija board that promotes tuberculosis awareness is plenty weird. Although this 1937 article has a few good Halloween ideas, most of it is filled with stuff that seems more appropriate for April Fools’ Day. Only the collapsing chair and shaking table seem potentially risky, which is quite the comedown from previous years’ entries in this series.

With that resource tapped, I tried looking through the free Google eBooks next. This issue of The Practical Druggist shows that even back in the 1920’s, pharmacies stocked Halloween goodies and built spooky displays in October. The unusual newspaper ad done in a mock play format is amusing, but not up to the usual standard of insanity I’m used to. The National Drug Clerk amps things up with a display that constantly references “the Huns” (despite the article’s comments on using Halloween fun to take kids’ minds off the war) and its suggestion of covering bare light bulbs with blue tissue paper to create interesting lighting effects. Yeah, I’d imagine a fire would definitely be an interesting lighting effect.

The Boy Craftsman mostly focuses on Halloween pranking devices, although the “goblin man” does ramp up the insanity factor. A scarecrow with a tissue paper and cardboard head lit by a candle is dangerous enough as it is, but a scarecrow that one is expected to strap on and walk around in while peeping out of a small hole is just asking for trouble. But the trail went cold after making that discovery.

Atomic Mystery Monster (who showed me the Modern Mechanix article that was featured in the first installment of “Vintage Halloween Insanity) came to the rescue by showing me some other weird articles from that magazine, along with something from a 1915 issue of Boys’ Life that he saw at a forum he frequents. Although “The Great Scout Snout Hunt” is a tale of the intended victim of the infamous snipe hunt prank turning the tables on the would-be pranksters, the spooky pranks he uses form what could be considered as a crude haunted trail. In fact, one of the pranks in the “trail” is somewhat similar to the above-mentioned “goblin man.”

Oddly enough, 1915 can be considered a major year for old school haunted attractions. In addition to the above “prototype haunted trail,” 1915 also marks the year the “Cave of Death” attraction I mentioned at the beginning of this article ran and the Hollycombe Steam Collection actually has a mechanized haunted house which was manufactured that year. Going back even further reveals that homemade haunted houses existed in the 1800’s! Although the exact details about what were featured in them are scant, I’d say decorating using rags and lit candles are a definitely dangerous combination that fits in with the theme of this series. Edgar Allan Poe’s 1842 classic “The Masque of the Red Death” also describes what can be considered an early home haunt:

“The seventh apartment was closely shrouded in black velvet tapestries that hung all over the ceiling and down the walls, falling in heavy folds upon a carpet of the same material and hue. But in this chamber only, the color of the windows failed to correspond with the decorations. The panes here were scarlet — a deep blood color. Now in no one of the seven apartments was there any lamp or candelabrum, amid the profusion of golden ornaments that lay scattered to and fro or depended from the roof. There was no light of any kind emanating from lamp or candle within the suite of chambers. But in the corridors that followed the suite, there stood, opposite to each window, a heavy tripod, bearing a brazier of fire, that projected its rays through the tinted glass and so glaringly illumined the room. And thus were produced a multitude of gaudy and fantastic appearances. But in the western or black chamber the effect of the fire-light that streamed upon the dark hangings through the blood-tinted panes, was ghastly in the extreme, and produced so wild a look upon the countenances of those who entered, that there were few of the company bold enough to set foot within its precincts at all.”

My final bits of haunted house related insanity from days gone by come from some books I read as a child. Although there are no online previews available for Elizabeth Wilkinson’s Making Cents or Shari Lewis’ Spooky Stuff, both are available at extremely low prices. Making Cents suggests creating “Ghoul Drool” by hanging wet yarn from strings of Christmas lights(!) and has a bizarre preoccupation with using cat food in displays while Spooky Stuff suggests having hidden assistants grab at guests’ ankles while lying in doorways along a hall. Although Lewis’ idea might not sound so bad at first glance, going over haunt expert Bertram Bertram’s guest articles on rules and safety at haunted attractions will make it clear why I have included it here. Remember: There’s a reason why most haunted attractions don’t let their performers touch guests…

Getting back to WikiSource, here’s an old (but newer than most of the featured links in this series) promotional Halloween image that seems innocent at first glance. That is, until you notice the swastika on the biker. I imagine the inclusion Lady Godiva is bound to enrage certain parents, too. “Games for Halloween” offers up a wide variety of bizarre suggestions, from making cardboard box Jack O’Lanterns lit by placing over a gas jet, having a person dressed as a ghost with hands covered in wet salt greet guests and playing games involving walking downstairs backwards while holding a candle, melting lead and jumping over a lit candle! Finally, some high quality vintage Halloween insanity!

Both Hallowe’en at Merryvale and The Book of Hallowe’en offer up both informative looks at Halloween traditions from years gone by and unintentionally hilarious images, such as this fortune-telling session that looks disturbingly like a Klan meeting. Meanwhile, the racial stereotyping in “Halloween Failure” is just plain offensive. If I hadn’t already used it in this article, I could have also included a bizarre Halloween postcard about scarecrows wanting to go to heaven as well.

And that, dear reader, makes all that I could find for crazy Halloween stuff from years gone by. I’m afraid all my resources are tapped. That said, there is a question mark in the title for a reason, as I will still keep an eye out for more material in the hopes that I can do more installments in the series. Failing that, I hope this farewell of sorts and the previous entries in the series are enough to satisfy you: