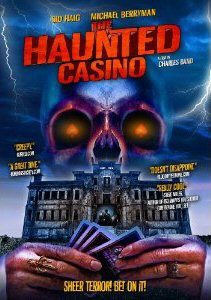 With his great uncle’s recent death, Matthew Dragna finds himself the as the new owner of the Mysteria Casino. Naturally, he brings along his girlfriend and a few mutual chums down to check the abandoned place out. Thing is, Matt’s great uncle killed a mobster and his crew during a botched takeover attempt and their restless spirits want some payback, along with the treasure hidden in the casino. Considering how the two lead ghosts are played by horror legends Sid Haig and Michael Berryman, things aren’t looking very good for Matt and company…

Originally released in 2007 as Dead Man’s Hand: Casino of the Damned, the film was presumably retitled as a promotional tie-in with this website (which gets plugged both on the box and when the DVD starts). So if you saw the film under this title and was wondering why so much dialogue was devoted to a dead man’s hand in poker, now you know. But that’s not the only gambling reference the film has to offer. Not only does the number of ghosts correspond with the amount of cards in a poker hand, but the majority of said ghosts can transform into beings that look like something out of a “Puppet Master: Los Vegas” movie. Their designs also incorporate some computer-generated effects that turn out very nicely (I especially liked the vanishing effect). I wish I could say the same about the CGI associated with the film’s early kills, though.

Similarly, I have both good and bad things to say about the writing. Although I’m sure some of you out there will disagree with this, I actually enjoyed the film’s “slow boil” approach to scares after the pre-title kills. I also liked how the writer tried to add some extra depth to certain characters. There’s more to Sid Haig’s character than meets the eye, one of the friends has a same-sex crush (which isn’t handled in the way you might expect) and an amusing twist on the “oversexed couple” horror cliché. It’s a shame that most of these go nowhere, but I do appreciate the scriptwriter’s attempt to do something different. There are also some plot holes to be found. Although the minor ones, such as how the spirit of a woman from the 60’s knows what a skank is, are forgivable, there is a major goof involving the number of kills that I’m shocked nobody caught. What’s even worse is that it could have been easily worked into the script so that desperate, reality show-style infighting could have pitted the friends against each other for interesting results. That said, it’s not a bad way to spend 80 minutes. Especially for when you’re stuck at the video store and just can’t figure out what to rent.

The DVD offers a widescreen transfer of the film, along with chapter stops and animated menu options styled after slot machines and cards. As far as extras go, there’s a making-of featurette and a slew of trailers (more on those later). Acting as a successor of sorts to the VideoZone segments from the company’s VHS days, the roughly 13 minute film features both director Charles Band and the cast discussing the trails and tribulations of making a low budget horror film (and the significance of a dead man’s hand). Along with discussing which cast members had previously worked on Full Moon projects, there’s also plenty of clips from the film and behind-the-scenes footage.

As for the trailers, we get ones for Puppet Master: Axis of Evil, Evil Bong, The Gingerdead Man, Doll Graveyard, The Haunted Casino, Skull Heads, Intruder, Dr. Moreau’s House of Pain and Killjoy 3. Sadly, there is no “Play All” option and the trailers are of differing (but not terrible) quality. Just watch out for the spoilers in the Intruder trailer, along with the obvious title edit in the preview for The Haunted Casino.

Bad Behavior has blocked 1255 access attempts in the last 7 days.