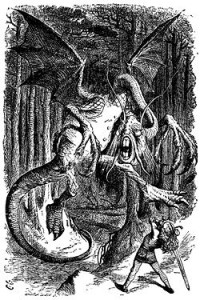 After doing two lengthy installments in the “Vile Verses” series, I had foolishly thought I had found all of the spooky poems I could ever find in my last entry. However, the recitation of Lewis Carroll’s “Jabberwocky” in A Nymphoid Barbarian in Dinosaur Hell made me realize there was still plenty of material out there. In addition to digging up “Jabberwocky,” I also discovered that Lewis also did another spooky poem called “Phantasmagoria.”

Speaking of authors whose work has been beloved by children, Ogden Nash has done his fair share of poems with creepy touches, such as “The Wendigo” and “The Tale of Custard the Dragon” (one of my favorite bedtime stories as a child).

Another poem from my youth is “Little Orphant Annie,” which my late grandfather often recited for me. While the name might not seem scary or even make grammatical sense, reading the poem (and its Wikipedia article) will explain everything. That last article also notes how the poem was based on true events from the author’s life. Given that both the author and inspiration for Annie are Caucasian, the use of “Mammy” seems to be part of the poem’s attempt at capturing a regional dialect rather than reference offensive stereotypes.

Cry of the Banshee is an odd case. Although the film was claimed to be an adaptation of a poem by Edgar Allan Poe in publicity materials, no work by Poe with that title exists. The film was also promoted with this short poem, but it cannot be found among Poe’s works. Research led to a play of the same name (written long after the film was released) that quoted a supposed Poe work, but further research revealed that said work doesn’t seem to exist! So was AIP telling a bald-face lie by claiming the film had a Poe connection? Not exactly, as they did insert a select few lines from Poe’s “The Bells” in the film’s opening, similar to what they had done to turn The Haunted Palace and The Conqueror Worm into “Poe films.”

Speaking of films and poems, Pumpkinhead is said to be based on a poem by one Ed Justin, which you can read here. While the article casts doubt on this due to its apparent unavailability prior to the film, this doesn’t necessarily mean it wasn’t based on a real poem. For example, the story “The Greatest Gift” wasn’t published until long after it was filmed as It’s a Wonderful Life (said story is a major reason why the film was found to not truly be in the public domain) and Sopranos creator David Chase’s unpublished novel Still Life was adapted into Grave of the Vampire.

Not only is Bertolt Brecht’s “The Swamp” full of creepy imagery, but it’s also inspired by horror legend Peter Lorre!

Speaking of inspirations, both the title and plot elements of Suspiria were influenced by Thomas De Quincey’s prose poem “Suspiria de Profundis” (which translates as “Sighs from the Depths”). Here is an extract from it featuring the part which captured Dario Argento’s imagination the most, “Levana and Our Ladies of Sorrow.”

Although best known for “The Rime of the Ancient Mariner,” Samuel Taylor Coleridge has also penned scary works like “Phantom,” “Christabel” and “Sonnet: To The Autumnal Moon.”

Wikisource also gives us works by Nicholas Vachel Lindsay, like his Poe tribute “The Wizard in the Street” and “Ghosts in Love.” Speaking of ghosts, Ella Wheeler Wilcox uses them as a metaphor in “Ghosts,” Robert Brooke discusses “Hauntings” and James Russell Lowell tells us of “The Ghost-Seer.”

Stephen Crane is no slouch in the eerie poetry department, having given the world “Behold, The Grave of a Wicked Man,” “Mystic Shadow, Bending Near Me” and “Black Riders Came From the Sea.”

Kaiju haiku. It both rhymes and makes a great deal of sense, given both are Japanese. You can read numerous example of it here.

Google Books brings us numerous works by modern day poets, such as Glyn Maxwell’s “Haunted Hayride” and “The Man Who Held His Funeral.” It also offers a look at the famed horror magazine Weird Tales, which provides us with poems like Nancy Springer’s “Fear,” Lynne Armstrong-Jones’ “Bewitching Lessons” and Ann K. Schwader’s “Moot Question.”

Famed science fiction writer Ray Bradbury is no stranger to the world of poetry, haven written poems like “Which Shall It Be” (his tribute to H.G. Wells) and “Revivere, Rex!”

The preview for Adam Rex’s Frankenstein Makes a Sandwich not only has the titular humorous poem, but also ones about the Creature from the Black Lagoon and the Phantom of the Opera. Tera Chaney’s Poetry of the Vampire has just what you’d expect in it.

Yellow Rider and Other Fantasy Poems features many poems by Steve Eng, like “Grey Skater,” “May-Eve,” “Haunted Heritage,” “Vaingloria,” his translation of Guy de Maupassant’s “Memories,” “Destination,” “Below the Horizon” and All Hallow’s Eve.”

Finally, there’s also “A Poet’s Epitah” and “The Witch-Bride” by William Allingham, “Halloween” by Gjertrud Schnackenberg and the unusual “The Vinegar Man” by Ruth Comfort Mitchell.