Please Help Us Win A Rondo!

Marlborough, MA is a small city nestled deep Middlesex County, which H.P. Lovecraft once briefly referred to as “a western Massachusetts back-water” in his essay “Supernatural Horror in Literature.” At one point, Marlborough’s territory had included Northborough, Southborough, Westborough and Hudson but its size dwindled as each of said areas eventually split off to form their own communities. Some horror fans might recognize it as the setting of Herbert S. Gorman’s novel The Place Called Dagon, where strange goings-on are reported in the area.

I had stopped by a haunted house there after visiting Hanson’s Haunted Farm (and Hayride) last October, which is presumably the reason Strange Jason had emailed me about a show taking place there. It was titled “What You Will Be Doing Tomorrow” and although I originally suspected that someone had hacked his account and was trying to lure me to a Facebook scam, I was pleasantly surprised that a little fact-checking revealed that the Facebook event link in the body of the email was genuine. There I learned that The Evil Streaks and the Ten Foot Polecats would be performing at The Lazy Dog sports bar in Marlborough. 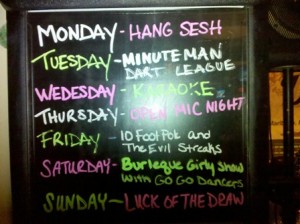 I was initially shocked that anyone would come to such an out-of-the way place for a show. I had heard of the Streaks before and they weren’t exactly small potatoes. You might remember them from their appearance in the very first episode of our podcast. This seemingly unusual venue choice made much more sense when I learned that both bands were from Massachusetts. Although I had a visitor coming the day after the show, the opportunity to have a little fun after having recently finished a ton of appointments and hearing Jason’s enthusiastic praise for attending Evil Streaks shows wooed me.

It had began to snow lightly when I arrived at the Lazy Dog following night. Thankfully I had on my FEARnet hoodie and jacket on, so I was prepared for the worst. After entering and paying my cover, I decided to give the room I was ushered into the once-over before taking a seat. Lots of people had poured into the bar, some clearly there for the show (plenty of spooky and offbeat attire) and others just wanting to drink and watch the big game. The crowd was largely male and what few women who were present were clearly “with” someone. Flirting was out of the question and mingling was…well…remember that one Dilbert strip? You know, the one where he’s worried about getting back from the bathroom before all the mingle groups have solidified? Let’s just say the groups solidified, although I did have an interesting conversation about “free ipad” scams with an older patron during the break between sets. I found a seat and enjoyed a seasonal draft beer from Sam Adams. The Lazy Dog’s bar lets you order food, but seems to presume that you already know their menu. Thank goodness I had some Pop-Tarts before leaving home. In the far corner of the bar, I noticed one of those “Megatouch” touchscreen games. I can’t say I was too surprised by that, given that arcade games have long been a staple of bars. Still, it seems odd to leave them in place due to the popularity of gaming on smartphones.

I watched the Evil Streaks set up in the small room of sorts that was used as the stage. Having never actually seen them, I was impressed by their outfits. Not quite costumes and yet not quite “regular clothing,” their fancy (to my eyes) attire give them a unique look. But why talk about it when I can show you: 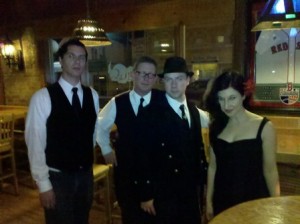 When I spoke with the band after the show in order to get their picture, I learned that they’re a veritable Frankenstein’s monster of bands. Lead singer/guitarist Myra is from Ghouls Night Out and Gein and the Graverobbers, Guitarist/vocalist John Kozik has performed with The Crimson Ghosts, Demons Seeds and Killslug while bassist/vocalist The Rev is from Mongrel and Gein and the Graverobbers. Drummer Too Fast Jim hails from both The Nebulas and The Crimson Ghosts. Jason tells me that he replaced another Gein member named Sloth, who left to pursue other projects (but is still on good terms with the group).

After a quick tune-up session, The Evil Streaks blew the roof off the Lazy Dog with their unique blend of punk and garage rock. They also have amazing stage presence, from Myra’s humorous introductions to John Kozik leaping so high that he almost hit the ceiling. The audience really got into it: There was plenty of head nodding, toe-tapping and even a little dancing amongst the audience to boot. Sadly, the Lazy Dog’s speaker system and acoustics made it hard to make out the lyrics at times, but it was only a minor detraction from all the energy and fun. Their set was very diverse, ranging from songs about sex with a demon and digging graves to a cover of something from a Tarantino film (which virtually guarantees it was originally in another film). One of my favorites was “Dirty Little Secret,” as shown here:

I should note that I did not film the above, nor was it recorded at the Lazy Dog. Still, it does let you hear the song and get a good indication of the “feel” of their performing style. While purchasing a T-shirt at their merchandise table (design seen below), the band was kind enough to pose for a picture…and this was before I even noted I was from Gravedigger’s Local 16! They are truly class acts all around. Although the blaring house music made it hard to talk, wherein I learned that I had actually spoken with John via email when I had obtained permission for use of the image in my Crimson Ghosts review! Small world. 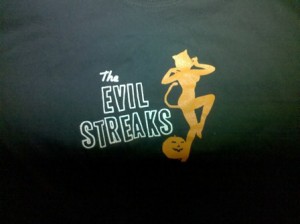 I just realized where that Jack O’Lantern is looking as I was uploading this. Man, Gravedigger’s Local 16 needs some kick-ass merch like this. After they left, an astonishing amount of people left and only myself and a few others seemed to be their to hear the Polecats, with the others merely treating them as background music for their late night drinking. While I understand this isn’t exactly an uncommon practice at shows, it was still sad to see people avoiding a chance to expand their horizons. 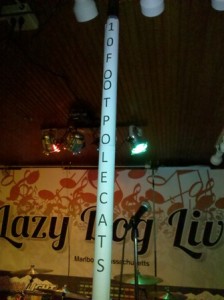 The term “polecat” can be applied to many types of animals. Although it’s usually a European weasel, but can also be applied to skunks or badgers. Given the band’s roots in southern music, I’d guess their name is a reference to the latter. The Ten Foot Polecats consist of Jay Scheffler (Vocals/Blues Harp), Jim Chilson (Guitar) and Chad Rousseau (Drums). Whereas the Evil Streaks have a dressed up look to them, the Ten Foot Polecats are strictly plainclothes and it totally works for them. They offer some minor (but cool) theatrics whike performing, such as Jim Chilson’s distinctive square guitar and Jay Scheffler’s mean harmonica work. Scheffler’s throaty singing nicely compliments the group’s “punk blues” musical style. Said style was demonstrated over a mix of covers and original material. There was no spooky content to speak of, but I still had a good time. I actually had a list of song titles handy, but my stupid Droid deleted it. So please enjoy this instead:

My only (minor) qualm with the group is that the bulk of their songs had endings that stretched out a final note before the big finish. Granted, I’m not too familiar with the blues and this could just be a standard trope of the genre, but it did get a bit repetitive after awhile and those who were actually paying attention to the band often had a hard time telling when it would be okay to clap. Sadly, most of the bar’s patron’s didn’t fit into that category. I was able to have a brief (but very friendly) chat with the group after the show, which had gone on much longer than originally expected. Since they were getting ready to leave, taking a picture was out of the question, but they were kind enough to let me use a promotional image of theirs. I made sure to tell them how much I enjoyed the show and express my dismay over the crowd’s lack of response to their great music. Thankfully, they’d played to great success in other parts of the state (and beyond), so they didn’t seem to care about the crowd at this particular venue. 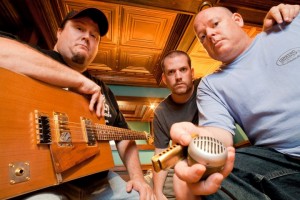 According to their Facebook page, they’re fans of bands like Sasquatch and the Sick-a-billys and The Goddamn Gallows, and have appeared with the likes of the Koffin Kats. In other words, you’re bound to find something you like (if not run into them) if you attend shows by many of the bands promoted here. I highly recommend checking out both the Evil Streaks and Ten Foot Polecats if you get the chance to. And so ends my blatant imitation of “Providence”…

Special thanks to The Ten Foot Polecats for use of the publicity picture!