Nobody Tell Danzig About This Place 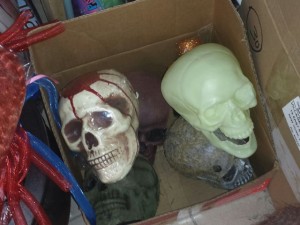 My head feels like the skull on the left so I’m going to make this quick. Stopped by a local Mom & Pop party/halloween store and yes – they carry the same crap costumes that Spirit Halloween does. Same racist, sexist garbage. And hey have a box of skulls. So while Spirit is the worst offender, in my opinion, they’re not the only ones.