Music to Haunt By: Legion of Shadows 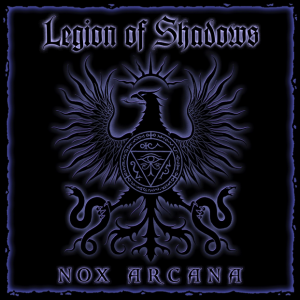 As you may recall from my last Nox Arcana review, I had to pass on reviewing the band’s 10th anniversary album due to a scheduling issue. Thankfully said issue has been since resolved and I can finally cover this musical tribute to Nox Arcana’s fanbase. Taking its name from from Nox Arcana’s official mailing list Legion of Shadows is made up of tracks inspired by the numerous fan suggestions they have acquired over the years.

As is the standard for Nox Arcana albums, things open with a spooky spoken word segment. The tolling bells and wordless female vocals that start “We Are Legion” usher in the dark, heavy tones and organ work backing Joseph Vargo’s speech about beings of darkness. “The Hidden Realm” starts out with light spooky tones that are almost like a music box. There’s an definite sense of creeping or sneaking while the eerie spectral chorus and tolling bell adds to the suspense. “Skeletons in the Closet” mixes light tones and pounding, menacing music with bells and wordless unisex vocals. There’s also some great performances on the piano and organ which conveys a kind of lurking fear to the listener. While one could get away with using this with an evil clown scene, I think this would be great in a slasher room (especially if played on a loop with the next track, due to its ending). But I’m getting ahead of myself here. “Shivers” lives up to its name thanks to its combination of eerie piano music and wordless female vocals while “Distant Memories” is perfect for any crypt, graveyard, etc. Why? Because its slow piano and faint wails create a sense of history. The pace picks up somewhat later in the track, but the overall tone remains the same. The moody strings and light chimes that open “Ancient Flame” lead to touches of harpsichord and a ghostly female chorus which give this track a medieval feel…at first. Although you could use this in a haunted castle scene, the blend of flute and hand claps give this a mystic feel that’s well-suited for a witch’s or wizard’s lair. The harpsichord also shines in “Loveless,” which combines creepy light music with some dark touches. The piano work, strings and extra soft female vocals help make this perfect for any spooky setting.

“Dreamscape” features light piano music with plenty of plinking music box tones and wordless unisex vocals that make it great for a haunted nursery filled with evil dolls. Heavy strings and faint wails start off “Evil Genius,” but strings and pounding tones take over. Wordless vocals and tolling bells join in later. It’s perfect for use anywhere you want a sense of evil to be felt. It could work in a mad scientist’s laboratory, but you might want to throw in some lab sound effects as well. “Ghost in the Mirror” offers more light and creepy music box-like tones, while a piano and wordless female vocals take over at times. Given the name, I suggest using it with a Pepper’s Ghost variant that makes ghosts appear in a mirror. “Toccata” is a relatively shortened (but still fairly lengthy) take on the horror classic that is “Toccata and Fugue in D Minor”. As the inclusion of ghostly vocals and bells would imply, this is not your standard take on this Halloween standard. Nox Arcana makes it their own while still remaining faithful to the original. This works wonders in a variety of haunt scenarios, but I imagine many will use this in scenes involving Dracula or a phantom organist. “Lorelei” takes its name from ancient folklore and uses a mix of light music box tones and faint female wails (with a few male ones as well) to great effect while “Black Phoenix” combines female vocals with touches of bells and revved up strings. “Spirits of the Past” uses tolling bells to usher in spooky piano and a mix of violins and harpsichord. This, combined with the vocals, creates an ancient feel.

“On Dark Wings” is truly chilling thanks to its effective use of piano work, bells and strings (along with some mixed vocals), which makes it great for any kind of creepy room. In “Haunted Dreams,” chiming tones and wordless female vocals are coupled with piano and bells. The piano work is pounding and heavy at times, which creates a sense of danger aided by violins. “Into the Night” has a medieval sounding feel thanks to its subdued harpsichord mixed with bells and choral work. “Rites of Passage” features fast and pounding opening with dark undertones. The use of violin, organ, bells and a gong are quite striking (as is the choral work). “Arise” has great chase scene potential thanks to its fast, frantic piano and moody bells. The string work and vocals add to the sense of pursuit. I think this would be best used by having it play once guests trigger a motion sensor in middle of a haunted hallway, right before a monster attacks them. “Legion of Shadows” has a strikingly eerie opening thanks to its use of bells, organ and harpsichord mixed with vocals. The plinking tones and piano work of “Heart of Darkness” gradually builds in intensity to create a feeling of darkness and dread. The string work, bells and wordless female vocals also add to the overall feel before an evil laugh ends the track. Or so it would seem to those unfamiliar with Nox Arcana. After a period of silence, a slow piano and whispering wind bring us to a Vargo monologue about having waited ten years in darkness while gathering power and kindred spirits (all backed by wordless unisex vocals). In addition to explaining the album’s cover art, he also bookends things with the same “We are Legion” quote he used in the opening track rise from the ashes as a creature of darkness.

Legion of Shadows is yet another excellent release from Nox Arcana and is well worth purchasing. Haunters and Halloween fanatics will appreciate how all tracks are suitable for individual looping (and how it can be used with pretty much any spooky theme). Looping the entire album while handing out candy on October 31st is also a great use of it. As always, the liner notes feature beautiful illustrations and other goodies. But the good news doesn’t end there! Band member William Piotrowski has created the soundtrack for the vampire movie Crimson Winter. Said score has been described as a mix of Nox Arcana and the work of György Ligeti and is available as a separate album. It truly is a great time to be a Nox Arcana fan.

Bad Behavior has blocked 832 access attempts in the last 7 days.