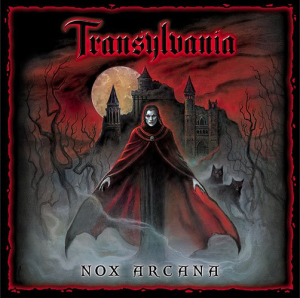 Nox Arcana was one of groups that inspired me to do the “Music to Haunt By” series and have been a constant presence ever since then. Given how 2013 is their 10th anniversary, it would make sense for me to review their newest release that’s inspired by fan suggestions: Legion of Shadows. But since that won’t be available until Halloween, I thought I would cover their fourth album instead. That album? Transylvania.

“Transylvania Overture” sets the mood with an eerie male chorus and winds, while Joseph Vargo narrates about nightfall and the undead rising. Imagine this being “spoken” by a guest-activated tombstone or some other prop. The soft organ work and unisex chanting in Latin add to the effect. Unlike other Nox Arcana narration tracks, there’s a much longer music break here. In “The Voyage,” the soft piano opening soon faces dark synth intrusions, along with wonderful string work and organs. The often male-dominated unisex vocals and tolling bells also add to the overall feel. In addition to vampires, this can also be used in a scene with a phantom organist. The sound of wind both opens and is a constant presence in “Gossamer Mist.” The moody and unsure piano work goes work with the wordless male and female vocals. If you have a room filled with fog, be sure to use this. “The Black Coach” offers deep and stirring piano notes coupled with beautiful string work. The addition of creepy wind and storm effects, along with a unisex choir and wailing, really gets blood pumping. The sounds of wind ushers in the short (forty-four second) “Sentinels of Stone.” After hearing stone grinding upon stone, a scary gargoyle voice describes their role as guardians and how none shall trespass. “Into the Shadows” mixes fast, pounding music and low male chanting (which is soon joined by wordless female vocals and ghostly wails). There’s also some great string work and even snare drums make a surprise appearance without taking away from the scares. The female yell-chants at the end are a great touch that helps the track’s mood of excitement and danger. In “Castle Dracula,” a pipe organ and wordless female vocals are joined by tolling bells and male vocals. Wordless female vocals also feature in “Visitors in the Night,” in addition to moans, whispers and wind. As Dracula’s brides ask the listener to come with them, the track seamlessly segues into the ethereal-sounding “Brides to Darkness.” Interestingly enough, there are extra soft male vocals to be heard in the background, along with an “old” sounding harpsichord.

The use of a harpsichord, strings and mixed vocals in “Grande Masquerade” allow potential for a phantom ballroom. “Memento Mori” has light, music box-like chimes and wordless female vocals combined with tolling bells. Besides reminding me of a prelude to Winter’s Eve, I can also see this being used in a haunted nursery. As one would expect from the title, “The Howling” features the sounds of wind and wolves howling (and snarling) plus eerie musical touches. What they might not expect is Vargo’s take on the classic “Children of the Night” speech. If your haunt is themed around Dracula’s castle, these bits of narration can be passed off as the haunt’s unseen (but ever-present) host commenting on select scenes. The nervous-sounding piano and heavy synth notes in “Nocturne” are a great match for the wails and wordless unisex vocals. The harpsichord and tolling bells go well together as well and the overall feel is one of darkness and dread. Tolling bells awaken swarms of bats in “Bats in the Belfry,” so you had better believe there’s plenty of flapping wings and squeaking to be heard. Said bells also lead into (and dominate) “Gothic Sanctum.” That said, there’s plenty of wordless vocals and soft scary music and this would be perfect for a haunted church. “Gypsy Caravan” makes excellent use of exotic drums, strings and tambourines (in addition to the chanting vocals). Given the stereotypes about the Roma people, skip the fortune teller scene and take advantage of the “Middle Eastern” sound for a mummy room or snake charmer scene.

“From Dusk Till Dawn” uses wind, ghostly wailing and eerie music to back an old woman’s warning of the dangers at night. Given the brief length, this would be perfect for an animatronic old woman or witch prop. The pounding and steady notes of “Night of the Wolf” make for a heavy tone. The men whispering in Latin and wordless female vocals add to the feel of pursuit and danger. If your haunt has a spooky church or cult-themed room, this is the track for you! “Echoes from the Crypt” offers plenty of ghostly moans and eerie music. The extra soft wordless vocals, tolling bells and light, soft music mixed with creepy backing music make for a great effect (especially the men chanting in Latin). If you have a crypt in your haunt, you know what to do with this. The wordless vocals and use of bells in “Shadow Hunters” convey determination and strength. A sliding stone slab starts off “Lair of the Vampire” and leads to soft spooky music. After a vampire warns us to beware and a vampiress tells us to come closer, there’s plenty of pounding music and wailing. Do I even need to say what this track would be good for? A bat swarm closes things out…or do they? The first of the hidden tracks is “Sealing The Crypt,” which starts like the last track, but then a male voice says the evil is vanquished and that the crypt must be sealed. Next comes “Ordo Dracul, Ave Dracula,” which features unnerving music and the chanting of titular Latin phrase. The wordless female vocals, a female voice whispers and we hear an evil laugh for the album’s true ending.

Even though Transylvania has been long since absorbed into Romania, its use in Bram Stoker’s Dracula (aka the inspiration for this album) created so much influence in American pop culture that people still refer to it as the source of all things scary. With that in mind, one could easily use this for tons of spooky setups in addition to vampire-themed ones. Perhaps this (and the excellent music) is why Transylvania seems to be one of Nox Arcana’s most popular releases. It’s been used in a movie, a televised showing of Nosferatu, selection from it appeared on an episode of So You Think You Can Dance, as part of an art exhibit and even as the soundtrack to a haunted attraction based on the album. I’d also guess the stage versions of Dracula featuring music by Nox Arcana used selections from it as well.

As always, the liner notes are beautifully illustrated and contain plenty of textual goodies relating to the theme of the album. With the exceptions of “Sentinels of Stone,” “Bats in the Belfry” and From Dusk Till Dawn,” all of the tracks’ lengths are well-suited to looping. Although one could certainly play this in a loop on Halloween while passing out candy given the universally scary nature of the tracks, I suggest going all out with a vampire theme. In addition to the fake webbing and bats, be sure to have lots of coffins (which can be made of cardboard or wood) and electronic candles or candelabras handy. Having a vampire dummy propped up in one or motorized hand lifting up a coffin lid should greatly add to the effect. Torn curtains in the windows are also a great touch, as are gargoyles and a yard full of tombstones. You can either dress up the door like a coffin or wear a vampire (or vampiress) costume while handing out treats from a scary throne. Papercraft armor and medieval weapons should look great when placed at a distance (and in dim lighting) and might help distract visitors until you hit them with a big scare. Don’t forget to have a fog chiller handy so you can have some horror movie-style, foot level fog!

Bad Behavior has blocked 3289 access attempts in the last 7 days.