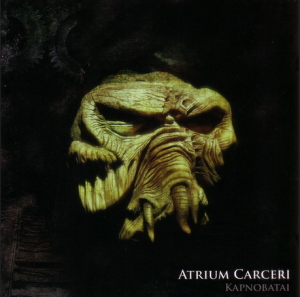 The timeline for the Atrium Carceri is just as interesting as the timeline for his various albums. Founder Simon Heath was also one of the founding members of the Swedish group Za Frûmi in 2000, with Donald Persson and Simon Kölle. The band focused on dark fantasy music and is not only split into two branches, but there are several side projects as well. Simon Kölle and Heath handle Abnocto, Simon Kölle has Musterion, and Simon Heath has both Atrium Carceri and Knaprika. Unlike his solo project Atrium Carceri, Knaprika is a joint project with Donald Persson (who left Za Frûmi in 2001). Atrium Carceri started in 2003 with the release of Cellblock, the first of many dark ambient albums with a focus on desolation and loneliness. The debut album’s title was quite appropriate, as “Atrium Carceri” roughly translates as “the fore room of a prison.” His work has also appeared in horror movies, so it’s not hard to see why haunted attractions could easily use his work. So why am I reviewing an album named after drug using shamans rather than ones utilizing a more traditional haunt theme? It’s really quite simple: I had come up with some new ideas for scenes in an alien-themed haunted attraction and was disappointed I hadn’t thought of them in time to include them with similar ideas in my Attrition review. Considering how rarely that theme pops up in haunted ambiance albums, I thought I would never get a chance to share those ideas. But then a friend told me about Atrium Carceri and how Kapnobatai just might be what I was looking for.

Chimes and a slow buildup open “Enclosed World/Liberation,” along with the sounds of metal doors unlatching and jets of steam. Along with the sounds of computers and machinery heard, there’s a dark chorus and snippets of a barely understandable conversation (along with lots of unnerving and gross sound effects). It’s like walking through an abandoned, but somehow still functioning factory. If you use this in an alien haunt, you can surprise people by having an alien projector suddenly turn on. It’s up to you if you want it to be motion activated or triggered by a hidden assistant. “Behind the Curtain of Life” effectively opens with a heavy buildup and the sounds of someone walking and breathing heavily. Something being tuned and the mysterious walker is surprised. There’s lots of machinery sounds, along with a man speaking in Japanese. Samples like this pop up a lot during this album, so you might have to build your theme around a haunted international space station to make them fit. Unless you live in an area with lots of people who can understand Japanese, of course. My first guess is it’s from a Japanese horror movie, but apparently anime samples are fairly common in the works of Atrium Carceri. “Impaled Butterfly” is fascinating to listen to, but I have trouble seeing this work in a haunt. Maybe it’s the combination of machinery and crickets. I suppose crickets could get into a factory, but years of spooky ambient albums have made me permanently associate crickets with outdoor scenes. A man and woman are heard conversing in Japanese, along with a spooky chorus. Both sexes are heard, but one woman’s singing (and crying) eventually stand out. “Maintenance Tunnels” has a great dark and spooky opening. There’s a definite sense of menace to the opening beats and even the lighter tones are sinister. The noises are almost like growls at times and the background chorus (with occasional wordless female vocals) do work quite nicely with the sounds of pounding machinery and a bubbling substance. I can see this working in a room with an alien slime monster If that doesn’t fit your theme, this track could also be used in a dark maze, chain hallway, spooky tunnel, boiler room, nursery or clown room.

In “Wrapped Cloth,” glitchy machinery beats convey a static feel. The scary sounds, faintly heard Japanese samples and a far off person chanting all add to the overall mood. A gong and heavy tone start off “A Stroll Through the Ancient City,” which leads us to an old friend: the sound of pounding machinery. The groaning, choking and conversation snippets allow for use with a scene involving a messy transformation from human to something else. Perhaps a performer can be hunched over in a corner and seem normal from behind, only to reveal a disturbing face and claws once they turn around and rush at your guests. I can’t describe all of the sound effects here, but there are screams, someone walking in dirt, electric effects and digital reverb. “Synaptic Transmission” is harsher and high pitched in opening, which does make it sound like some sort of transmission or feedback. There are plenty of static-like tones and bizarre sounds…or are they voices? It was a great idea to have the music itself get disrupted at times. Someone is heard talking, but I can’t place the language. The spooky male chorus is a wonderful touch, as are the mechanical sounds and pounding beat take us out. This is perfect for a room (or whole haunt) themed around a haunted space station or aliens. If you go the aliens route, be sure to have plenty of alien artifacts and various bottled specimens on display. It’s surprising how easy it is to make unearthly objects out of clay. Using a lighting setup like this also adds to the effect. “Ruins of Desolation” is further proof you have to hear this album in order to truly understand it. This review can only go so far. It’s a low key kind of creepy as glitchy tones and distorted voices are coupled with pounding beats and briefly heard snippets of male choral work. The surprise orchestral tones and chorus do work very well here. I can see someone using this in a mad scientist’s lab or a spooky room filled with old televisions playing static. Perhaps one of them will start playing something people can actually watch, which allows for a performer to sneak up on them. It’s hard to describe the opening of “Torn Citadel of the Autarch,” but I’ll try anyway. There’s distortions and spaceship landing noises aplenty, along with droning, screams and static over a steady, ever present beat. I absolutely love the musical use of distortions here. “Monolith of Dreams” has a medium beat and truly bizarre musical work (but in a good way). A rare English language sample says something about our eyes, which is soon overtaken by storm effects, crickets and a woman crying and panicking as someone struggles with the door. The Japanese samples get really frightening toward the end. A sample of an interview talking about a killer opens “Stained Pipes,” but this soon gives way to heavily distorted speech and music. Its pulsing, pounding tones and echoes will haunt you. There’s also another sample of the Japanese woman talking. If you turn the volume down really low, I can see this working in a morgue of some kind. “Thermographic Components” has a great moody horror buildup, complete with eerie female vocals. Some parts remind me of John Carpenter’s music in the 80’s while the rest of it is an instant head trip. There’s breaking glass, pounding, moans, male vocals and plenty of distortion effects. “The Corruptor” offers a creepy, pounding buildup which becomes a mix of unearthly moaning and distorted “transmissions” after a sample tells us to “destroy.” The word “monster” is clearly heard later on, so there’s lots of potential fun to be had with this track. The distortion-filled opening of “The Carnophage” leads to the sound of someone (or something) breathing and moving among the static. After we hear tuning in noises, there are plenty of garbled samples and other audio oddities. Having the track close by “tuning out” is a very clever touch. I can see this working well with an alien control panel coupled with a disguised drop panel.

With Kapnobatai, Atrium Carceri offers an instant lonely journey through a bizarre industrial wasteland. Although it runs over an hour, the way sound is used in it makes it feel much longer (and I mean that in a good way). Given how the shortest one is “only” over two minutes in length, all tracks can be looped individually. Although my personal opinion is the general public could potentially get confused if you used the tracks with the Japanese samples in your haunt (minus the international space station theme), they can still be used if you know your audience would react favorably to them. With the right group of friends, having the entire album softly playing in a loop in a dark room or hallway at your next Halloween party could make for a very interesting experience. Otherwise, I suggest selecting the tracks which work the best for you. But, in fairness, this album was not originally intended for use in this manner. The most recent albums are 2013’s The Untold and the 2014 Cryo Chamber collaboration Cthulhu. Cryo Chamber is the dark ambient label Heath founded after parting ways with the now defunct Cold Meat Industry label in 2011. Although Swedish in origin, Cyro Chamber is now located in America. As I enjoyed my experience with this album, you had better believe and will definitely be seeking out other works by Atrium Carceri (and Cryo Chamber) to review in the years to come.

Special thanks to Atrium Carceri for the review copy!