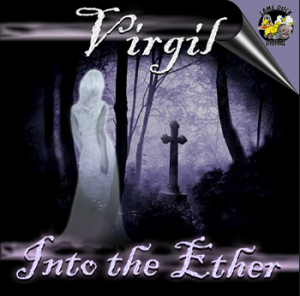 Virgil Franklin, often known as simply “Virgil” to fans of spooky music, has a lengthy musical résumé. Having worked as a freelance arranger/composer for many years, founded the label/recording studio Lame Duck Digital in 2000. This quickly led to him composing and performing numerous film scores. On top of that, he gives demonstrations at conventions and shares his audio skills at Vincennes University. His first release under as “Virgil” was the 2002 album Spacial Estates. But his first horror releases came out two years later: Out Of The Ether and Music For The Others. These were soon followed by Fade To Black, Klown, Dark Hollow, Hillbilly Hell, and A Visit From Mister Grey. Not having released a new solo horror album since 2008 (although he did do a collaboration with Clifford Franklin called The Plot in 2011), Mr. Franklin announced his retirement from the genre in 2013. Thankfully this was short-lived and he returned that same year with two new albums: Into The Ether and Night Sins. Of the two newest releases, I chose to review Into The Ether due to its interesting theme. The album references the names and styles of his many previous releases but contains all new material. With such a celebration of his past and present available, how could I refuse?

Soft tones take us “Into The Ether,” where eerie piano work sets the stage for scares. I never thought I would ever hear a scary horn, but here it is. The choir and rockin’ guitars make for an unusual (but pleasing) combination. “Zombies 1” has a somewhat misleading name. The wailing wind, synth work and musical moans make one think of spirits rather than the walking dead. This can be used in many kinds of haunted attraction scenes, but I think it would work particularly well with a moving Ouija board. “The Darkness In The Hollow” has knocking synths and soft, playfully creepy music something that can be described as being like a “theremin fairy tale.” With that in mind, why not use it in a scene inspired by fairy tales or in a haunt intended for younger audiences? Dark and heavy synths open “Left For Dead,” which reminds me of crashing surf. There’s plenty of wailing winds and other creepy touches while knocking noise and otherwordly effects come in around the second half. “Miklos’ Dream” offers soft, light music coupled with dark strings. There are plenty of classic horror music touches here and you’ll know them when you hear them. “Midwest Haunters” is named after the Midwest Haunters Convention and the quick, spooky piano work reminds me of the musical stylings of Midnight Syndicate. The eerie theremin work is nicely mirrored by the dark strings. “A Stock Of Iron” is also named after a haunters’ convention. In this case, it’s Ironstock. Crickets, otherworldly tones and eerie music start things off and storm effects bring in lighter (but still creepy) work. The beautifully scary piano and ticking clock which close this track make it especially useful for spooky areas containing a haunted clock. “Zombies 2” lives up to its name thanks to its catchy “Voodoo” drumbeats and creepy effects. The soft, distant flute and use of a musical instrument which sounds like fluttering insect wings are great touches. It reminds me of H.P. Lovecraft’s description of the original Arabic title of the Necronomicon translating as “that nocturnal sound (made by insects) supposed to be the howling of demons.” So in addition to playing this in rooms themed around jungles or shrunken heads, you can also have it playing in a room with a Necronomicon prop. I recommend playing it softly enough so that it can only be faintly heard when your guests are close to said prop.

“Master Of The Ethermuse” is a reference to a title used in reference to Mr. Franklin and features plenty of heavy breathing and spooky piano work. My short description doesn’t do this justice, you really need to listen to it to truly appreciate it. “Left For Dead (Reprise)” offers sinister ethereal effects, soft moans and distant drumbeats while the fairly speedy piano and synths of “Pirates!” provide a feeling of adventure. Loud, eerie effects open “Atmosfear,” along with some soft moans and dreamlike chimes. It reminds me of the kind of music you hear when a character on a TV show has a nightmare. It your haunt has a vortex or scene set in the netherworld, this is the track for you! “John’s Vision” has a very effective, super soft opening buildup of effects. The pounding tones combined with the light and quick synths will make listeners think of crawling things. With that in mind, using it in areas filled with spiders or insects seems appropriate. The pounding drums and creepy synth work of “Music For The Others” take on a rather mournful tone, even with the addition of “horror” musical stingers later on. Possessing a length of over eleven minutes, “Luminousity” is easily the longest track of the album. It’s great for actors who have to spend time in one area with this playing in a loop since there’s so much variation on display. There’s soft piano work accompanied by strings, harpsichord and some eerie synth tones. While good with low key scares and generally creepy scenes, the medieval feel conjured by the harpsichord also allows its use in a room themed around castle or throne room. “Miklos’ Dream (Reprise)” has a spooky synth buildup this time around and creepy chimes add to the dreamlike quality of the track. But the drums and burst of menacing synth change all that real quick. With a name like “Klown,” it’s easy to guess how it will sound and what type of haunt scene to use it with. Creepily weird clown laughter starts things off as a clown urges children to come and play. This clown returns throughout the track to both laugh at and taunt the listener. In addition to the calliope and synth work, there’s also some surprise guitar work!

Into The Ether is both a perfect way for Virgil to demonstrate he hasn’t lost his touch after a long break and is a highly recommended addition to any haunter’s collection. The track lengths allow for individual looping without being repetitive and its wide selection offers much to choose from October 31st rolls around. That said, a few tracks have a good deal of silence at the end which should be considered when doing so. These tracks are “Midwest Haunters,” “The Darkness In The Hollow” and both “Zombie” tracks. But I should stress how this is only a minor issue and it doesn’t effect the overall quality of the music. Virgil Franklin has since announced two new albums scheduled for release in the near future and I (like so many other Halloween enthusiasts) eagerly look forward to them.