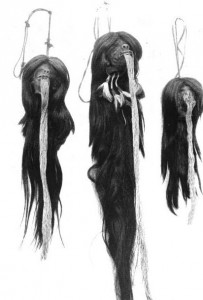 Although associated with African jungles and voodoo in American popular culture, shrunken heads are actually a product of select South American and Melanesian tribes. Most reference material on the matter focuses on the Jivaro, a collective term for the Shuar, Achuar, Huambisa and Aguaruna groups. The purpose of the shrunken heads is simple: When an enemy is slain (especially one that has killed a family member), their head is removed and shrunken in order to keep the spirit trapped inside. That way, the ghost could not seek revenge and any fallen family members were both avenged and honored. Despite the importance of their creation, many of them were discarded after they had been completed and their purpose had been served.

How were the heads shrunk? Obviously the head gets cut off after the initial ceremony, but then the skull (and muscles, fat etc.) are removed after the skin has been split via a cut made starting at the back of the neck. After objects have been inserted in order help the head keep its basic shape during the shrinking process, the eyelids and mouth are sealed shut. Once fully sealed, the head is boiled in water mixed with special herbs. The head is then dried and further shrunken in hot sand. After any final molding of the face, the shrunken head is rubbed in ashes and sometimes decorations are even added. As the person preparing it had to fast during the process, a big feast was held after completion and the head was displayed there.

Although shrunken heads were relatively rare at first, the interest generated by travelers to those areas resulted in a huge increase in the number of shrunken heads being produced. Apparently killings increased and bodies were stolen to meet the initial demand, but later monkeys and animal skins were used to manufacture artificial ones.

If you want a shrunken head and the store-bought rubber ones just aren’t enough, there is another (and legal) way to get one. All you need is an apple, a few household items and at least two and a half weeks (don’t worry, you won’t have to work for that long). You can find all of necessary directions here. For those of you who don’t have that much time, this site has and alternate method that can yield faster results at the cost of the head’s quality. But hopefully my posting this information early on in the Halloween countdown will give you all more than enough time to have your shrunken head(s) ready in time for the big day.

Bad Behavior has blocked 2452 access attempts in the last 7 days.