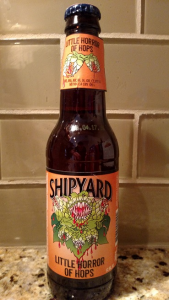 Finding a beer to review for the 2015 countdown has proven much more difficult than I had originally expected. I had tried tracking down the unnamed brand I had mentioned offhand in a review last year, but quickly discovered none of the liquor stores in my area carried jugs of pumpkin ale and I could not identify it at this time. But I did learn of the existence of beer freezers which project animated displays on the glass door. The potential application for such technology in haunted attractions immediately sprang into my mind. But that’s not the subject of this article.

“Little Horror of Hops” is an India pale ale and not a traditional October pumpkin beer. Think of it as a type of regular beer in a Halloween costume rather than a Halloween beer. Shipyard promotes it as having a “…complex malt blend” with “[p]eppery spice notes and a robust citrus hop flavor [which] complement the dry hop finish.” I guess my palate isn’t sensitive enough because I found it to taste mostly of bitter, piney hops. But I have to stress it was not overwhelmingly so and was an excellent beer. I found it was best served when it’s poured out into a glass. Doing so will yield orange colored beer and lots of frothy head. In other words: Shipyard does it again! So if you’re one of those people who prefers bitter to sweet in their beers, be sure to grab a case of “Little Horror of Hops” this month. And the same advice for those who have no preference other than the beer being good.

Like many of you, I was wondering why Shipyard opted not to use the obvious “Little Hop of Horrors” name. I knew I couldn’t ask Shipyard since they never replied to my last email. So I decided to look into it and found out something very interesting. It turns out they had been using the name at one point and later decided to change it. Why the change? While I can’t say this for certain, I suspect it might have something to do with another IPA called “Little Hop of Horrors” being offered by the Old 99 Brewing Company the year before Shipyard started using the name.

During the course of the search which lead me to discover the subject of this review, I also learned something very interesting about “pumpkin spice.” It turns out it doesn’t have to actually contain any pumpkin in it. According to what I read on a comment at Dinosaur Dracula (which I later verified elsewhere online), a more accurate name for it would be “pumpkin pie spice” since it’s usually a combination of cinnamon, allspice and a few other spices. Ginger and nutmeg seem to be the most popular, but I have seen other variations as well. Thankfully it turns out both of the beers I reviewed last year contained both actual pumpkin and pumpkin spice, so I don’t have to go back and fix anything. Why am I bringing this up? In addition to it being a nice way to pad out the article, it also allows me to note how a DinoDrac comment thread also led to my discovering the existence of “Little Horror of Hops!”