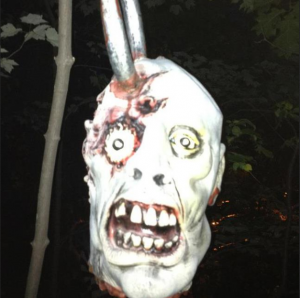 Despite this technically being the Haunted Woods’ first year in operation, the attraction has quite the backstory. In 2002, George Larassa ran a haunted house out of his garage in order to help collect food for those in need. After a few years, Mr. Larassa moved and his new residence was sadly not well-suited for haunting. Thankfully, his friends Steven and Sharon Levy volunteered to keep “Marlboro’s Haunted House” (and the food drive) going as a yard haunt and were able to use Larassa’s props in this event along with some additions of their own. The Marlboro Lions Club got involved sometime later to help haunt the place, but they were sadly not present on the two occasions I was able to swing by. This year marks the return of George Larassa, who has permanently taken back the reins to the food drive and is returning it to its roots as a full-fledged haunted attraction with the help of several volunteers and the Marlborough Moose Lodge.

That said, much of the spirit of the yard haunt years of the attraction still shines through. The woods is just as packed with decorations as the earlier incarnations were. It was a lot of fun to see some familiar props scattered throughout the woods, both as major set pieces and as random decor. As was the case during the yard haunt days, you could easily go through it multiple times and still spot new details during each trip. I was also pleasantly surprised to see that most of the cute, kid-friendly decorations were not present in woods, and what few that were kept stayed solely at the entrance of the haunt. That said, the Haunted Woods does have a way of making the spooky events in the woods more suitable for younger visitors. You see, they cleverly lend out glow sticks to all children who go through the woods, so that the performers inside can see them from afar and know not to target them.

The Haunted Woods makes great use of music and effects, including some creative uses of light and darkness in its scares. As it is set in a wooded area, it is possible to see ahead or the back of displays at times. However, there was definitely an effort to reduce as much of that as possible through fog machines and the placement of props, screens and some rather ingenious bits of misdirection from the tour guide. Speaking of misdirection, there were many such scares present in the woods, along with lots of monsters following you from behind and the traditional “jump scares.” Truth be told, I was actually starting to get sick of the people following me after awhile.

I was also impressed by the skills of the kids, teens and adults that portrayed the various monsters lurking in the woods. They never missed a beat and I never caught them without their masks on. I was also pleasantly surprised to see that none of them were of the “wearing a mask with street clothes.” Instead, everyone wore appropriate costumes and several performers had excellent spooky makeup jobs instead of wearing masks. Considering that I’ve paid good money to go through professional haunted attractions that didn’t show such care, this was a very welcome change of pace. I never felt rushed while going through the woods and the length of my trip felt just right. I had so much fun and experienced so many distractions (both intentional on the part of the haunt staff and me trying to take in as much as possible) that I didn’t reflect on unlikelihood of certain scenes being in the woods until it was all over. There were some times were I could hear laughter ahead, but I’ll let that slide since I’m not sure if it was the actors or other visitors to the haunt.

I should also note how the cast of monsters changes every night. I’m sure the empty jail cell seen during my trip would have had someone in it had I gone on another date. Speaking of changes, I’ve been assured by Mr. Larassa that there will be a mix of old and new scenes in the woods every year.

Once confined to a residential neighborhood with limited parking, the haunted food drive is finally at a location with enough space for both a full-scale haunt and plenty of parking. It’s existence is a welcome change of pace considering the rarity of haunted attractions in the region and quality of the Haunted Woods is even more impressive when you factor in how this is the first time “back in the saddle” by someone who hasn’t been haunting since about 2004. If things continue to get better from there, this could easily become a 5 skull attraction in no time. So definitely make sure to stop by the Haunted Woods this October. The price is only a canned good and all the “proceeds” go to charity. If you want to help even more, you can even volunteer to help out if you live near the area! What’s not to love?

Special thanks to the Haunted Woods Food Drive for use of the image!

Bad Behavior has blocked 881 access attempts in the last 7 days.