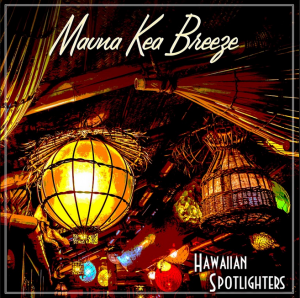 You may recall how I briefly brought up this album last year as a preview of sorts for the 2018 Freaky Tiki Surf-ari. Mauna Kea Breeze might not have a single shred of a horror connection but it’s still worth discussing due to its importance to the Tiki scene. The original pressing was one of the most sought after and expensive albums in the Tiki revival. It turns out that rarity was due to it being pressed by the vinyl equivalent of a vanity press service. With only 200 copies in existence, actually finding a copy was tough work. Scraping together enough money to afford it was no easy task, either. But the winds of change started blowing in 2015. That’s when exotica expert Jeff Chenult managed to snag a copy. Enchanted by the music he acquired, he scoured the internet trying to find members of the band. It was a hard search but his perseverance paid off when he located Al Pabilona Junior on Facebook! Al Pabilona Junior had played drums in the band with his father and other family members as “Al’s Spotlighters.” The band played several weddings and other such events in Hilo, Hawaii before the family moved to California and the band became known as the “Hawaiian Spotlighters.” This was also around the time they decided to record Mauna Kea Breeze. Mr. Chenault quickly got Dionysus Records involved and arrangements were made for a full restoration and reissuing of the album through its Bacchus Archives label.

The opening track “Adventure in Paradise” is everything you could want from old school exotica. The opening percussion and chimes build up to a cymbal clash, which takes us into a world of soft vibes, various bird calls and even more chimes. There’s also moody saxophone and piano work mixed in with some unusual percussion work. The inclusion of “Misirlou” might surprise you at first. Although popularly thought of as a surf song, it’s actually a traditional Eastern Mediterranean song Dick Dale decided to do a cover of. There’s plenty of hand cymbals and piano work, but the guiro work is the star. “Un Like No a Like” appears to be a misspelling of “Ua Like No a Like.” It features guitars and extra soft percussion which carry the listener through the rest of the track with only minor contributions from other instruments. “Yellow Bird” is both soothing and calm thanks to its blend of soft guiros and vibes. That said, the vibraphone work does pick up once the guitar strumming guitar and interesting percussion effects join in. “Beautiful Kahana” has an equally beautiful opening using complimentary guitars rather than dueling ones. Although other instruments are barely heard in the background, it’s not a bad thing in this particular case. “Filipino Love Song” is proof positive that music doesn’t have to use a ton of instruments to be enjoyable. In this case, all you need are dreamy vibes and bouncy guitars.

“Mauna Kea Breeze” was composed by Bill Pabilona and appears to be the sole original track on the album. It’s got tons of chimes, guiros and claves combined with frenzied bursts of guitar work. It’s one of those tracks which keeps the album from getting too relaxing. “Sweet and Lovely” features a sensational old school cymbal buildup (you’ll know what I mean when you hear it) and a mix of vibes and piano work. As someone who used to play drums, I was very fond of the use of snare drums in this track. Even if we put the rarity of the album aside, it’s tracks like “Kawohikukapulani” which make it easy to understand why this album was so sought after in the Tiki scene. Its opening vibes and soft, slow guitar are so smooth the track feels like a musical Mai Tai. Similarly, listening to “Caravan” will have you imagining moving horses. It all but screams “Freaky Tiki Surf-ari” thanks to its mixture of guitar reverb and exotic percussion. We’re talking bursts of hand cymbals paired with some really cool guitar effects (and variations). “Nola” is another track that’s best described as “bouncy and light hearted.” It’s all thanks to the masterful use of guitar work and snares, along with touches of reverb. “Harbor Lights” uses musical instruments to fill in for the sound of boat horns and the effect is perfect. It’s close enough to make you think of a busy port but just different enough so you know they didn’t just dub in some stock sound effect. The musical buildup of soft, slow guitar and vibe work leads to the track’s normal volume (and pace). But you’d better believe it picks up for end! It’s a great closing to a great album.

Mauna Kea Breeze was quite an experience and I mean that in the best way possible. One listen will make you wish the band had released more albums. Each and every one the the cover songs gives the original versions some serious competition. It also doesn’t hurt how the restoration makes it sound like everything was recorded yesterday. Although you can only purchase Mauna Kea Breeze as a vinyl LP, it does include a digital download code you can enjoy even if you don’t own a turntable. Unlike the original pressing, this edition of the album is readily available in several majors retailers. Oh, and here’s another bit of interesting news: Al Pabilona Junior is still performing! He’s in a band with his daughter Olivia and it’s called “The Good Vibes Duo” (formerly “Undertow”). Some sources even refer to the band as the newest incarnation of Hawaiian Spotlighters! But even if it’s not the same band, it’s nice to know Hawaiian Spotlighters’ musical legacy lives on.