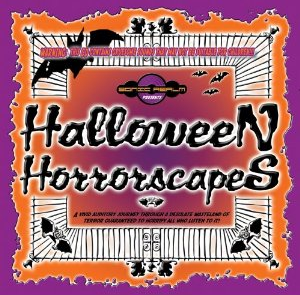 Halloween Horrorscapes is a very interesting case. Although it’s an album of soundscapes, there’s just enough music in it to keep it from being your typical scary sounds CDs. Also separating it from the usual Halloween fare are its intense, not entirely kid-friendly nature and its use of layered sound. While not 3D audio, it does provide depth to the tracks. For example, things are heard in the distance in several tracks, while storm sounds become muffled when one soundscape enters a house. Sonic Realm also has the distinction of being one of the few groups in “Music to Haunt By” to have their work featured on Music Choice’s “Sounds of the Seasons” channel every October.

Things kick off in “Stormy Awakening (The Dark Forest),” which starts off with the sounds of a storm in a spooky forest. It’s an inverse of most songs featured in this series, with sound effects dominating lightly-used (but effective) music. The sounds of rain and thunder are constants, as are cawing birds, screams, evil laughter, fire and chainsaws. These are only a mere smattering of the sounds you’ll hear, as there are for too many to document. As for the music, there are some great drums and piano work, especially during the “guy running and later being torn apart by wolves” segment. While you might not think the sound of a falcon would fit in with scary sounds, this track proves you wrong. That said, there are some sound effects that seem out of place in a haunted forest, such as electrical equipment zapping. That said, the overall soundscape transitioning seamlessly into “Blood Hunt,” which has great drums at the opening. In addition to the wolves, rain and chainsaws heard in the last track, this one offers up many new effects, like ghosts, monsters and creaking doors. There’s also “heavy” music in the background at times. The album has mixed bag of screams. Some are great sounding classics you’ve heard elsewhere, some appear to have been recorded especially for this album, and a few others seem a bit off to me. But that is just my opinion, your mileage may vary. In fact, I suggest that you check out the official album samples on Amazon and iTunes before making a decision.

Clocks tick, wind whistles and monsters growl in “The Dead Will Rise.” Said growling (and roaring) accompanies the sound of a creaking door, footsteps and someone being eaten, which make for a great effect. We also get running water and stock monster roars mixed with a creaking door, footsteps and victims being devoured. Running water, whippoorwills and heartbeats are joined with touches of creepy music (especially the violin riffs and moaning chants). Eerie, synth-sounding music is heard in “Alone at the Cabin,” along with chimes. We hear breathing and rain, the latter of which becomes muffled after we hear a door close and footsteps. Our unseen protagonist is soon attacked by some howling beast, which leaves the cabin for more prey with an evil laugh. Despite the creaking of a closing door, things are only just starting on “The Lab Experiment (A Rebirth).” Bubbling potions and electrical cracks go perfectly with the storm effects. Breathing and an evil laugh hint at the awakening of a man-made monster. The door opens to panicked villagers, various bird calls and music “stings.” With an evil laugh and electricity crackling, the villagers soon meet their fate. The mad scientist even decides to join in on the fun with a chainsaw! Rain and hoof beats signal the arrival of “The Headless Horseman,” whose ride sounds like no ordinary horse. The overall effect is like caught in forest during a storm while trying to run from the horseman. Some might question why the horseman can laugh evilly without a head, but why should that matter when he can ride a horse and effectively chase people without one? Synth music takes us away from the horseman and to the sounds of digging and a man being attacked (and eaten) by a monster. Spooky drums are coupled with the sounds of numerous screaming victims, wind and chainsaws in “Killing Spree,” which is perfect for any “mad slasher” room (especially if you have a few actors portraying victims). In what can easily be considered a Halloween CD first, “Electrocution in the Shower” features someone (or something) coming inside from storm. As we hear the sound of someone showering getting closer, the guest activates a TV and throws it in. Scary music seems to signal them to go outside with the sounds of ravens, wolves and digging in a storm. “The Transformation” has us hear walking and growling, along with violin riffs and unisex chanting in storm. In addition to the various bird effects and evil laughter, there’s lots of eerie music here (with an effective piano slam). “Fear (Death by Axe)” has a scared person going inside from a storm. They hear a roar and try to hide, but the opening door accompanied by the sounds of footsteps, growling and a swinging axe seem to indicate they are far from safe. While the ticking clock, scary synth music and heartbeat stretch things out, the evil laugh and scream tell us that the hider has been found. We fade out with thunder…

In short, Halloween Horrorscapes is an amped up version of those spooky sound effects CDs you find everywhere come October. All the tracks are suitable for looping and transition into one another seamlessly. Do the soundscapes stick entirely to the theme suggested by the titles? Usually no. Will it scare kids? Yes. Hell yes. While I would have preferred more of an adherence to the theme suggested by the titles, that doesn’t mean you can’t use the tracks in a haunted house. For example, you could use “The Headless Horseman” in a room divided up into sections featuring the Headless Horseman, a gravedigger and a monster eating someone. Alternately, you could have someone in a “control center” stop the track just before it reaches the point where its starts sounding the way that doesn’t fit your haunt. If you do an old fashioned “touch ‘n feel” haunt with a blindfolded patron, then the tracks can work perfectly. You could lead someone through a “haunted forest” (dimly lit room with leaves and twigs on the floor) while playing “Stormy Awakening (The Dark Forest)” and “The Headless Horseman,” explaining that the forest is filled with mutations and equipment from a mad scientist. After entering the scientist’s castle (a doorway with threads hanging down, using one of the many tracks featuring a person entering a house), they can be led to the lab to inspect body parts (the blindfolds being used to protect the mad scientist’s identity) while “The Lab Experiment (A Rebirth)” plays. During the chaos, you tell your patron that the doctor is gathering more parts as “Killing Spree” plays (while flicking your wet fingers at them to simulate blood splatters) before you take them to a room where they can remove the blindfold and wash their hands.

I am also aware that many people like to cram as much spooky stuff together as possible in yard displays and haunted houses, and don’t necessarily care about how realistic such a grouping is. Halloween Horrorscapes is perfect for such setups. In a way, this album also hints at the future of “Music to Haunt By,” as next year’s installment will be called “Music to Haunt By and Sounds to Scare By” since the amount of spooky ambiance albums seems to be fading while the number of spooky sound effects albums is increase. While not your typical ambiance album, Halloween Horrorscapes is definitely work picking up.

Special thanks to Sonic Realm for the review copy!