It Came From Wikipedia V 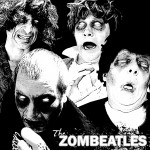 This time, the Zombeatles have reached out the undead horde as well as their fans to help fund their second release. The Fab Gore – Jaw, Pall, Gorge and Dingo – have established a Kickstarter Campaign to raise the funds needed to record and release their sophmore album. We’ve reached out to each member and this time around, we speak with DINGO. At the end, you’ll find the video on their Kickstarter campaign page that will let you know what you can do to help out the Zombeatles.

What do you think the worst thing someone could possibly give out for trick-or-treating?

A rotting egg or fruit.

Bad Behavior has blocked 809 access attempts in the last 7 days.