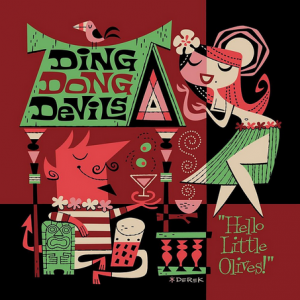 The Ding Dong Devils are back! While the songs are all new, their unique brand of playful exotica/surfabilly/fuzzy rock is still the same. Hello Little Olives is loaded with musical shout-outs, which ranges from Don Ho to GG Allin!

“Meet Me At the Hula Hut” kicks things off with a laid back Hawaiian beat. As the Ding Dong group sings about an amazing sounding (and most likely fictional) Tiki bar and how they want you to join them, some exotica legends get name checked. References to other musicians also pop up in “We’re the Ding Dong Devils,” which features a “Quiet Village meets Iron Butterfly” segment that is simply not to be missed. Fans of the “Ding Dong Devils Theme” from their first album will definitely enjoy this. The retro rock and tambourines of “BBQ Tiki Ribs” set the perfect party atmosphere for your barbecue (or any other get together)…so long as you have ribs on the menu. Long before Guardians of the Galaxy made Blue Swede’s cover of “Hooked on a Feeling” popular again, the Ding Dong Devils paid tribute to it in “Hula Hula Hot Rod.” It’s a tale of how someone who bought a hot rod online and, unsurprisingly, it has issues. Issues that make for an entertaining song! In “Weeki Wachee,” the band sings about an island with swingin’ mermaids. The wild instrumental break seems to be intended to simulate what it’s like to be underwater. The title “Yes, Master!” might make you think of hunchbacked lab assistants and brain transplants, but the sound of a cracking whip which opens it makes it very clear what this track is about. This is a cover of the 1958 song by the Whips and Julia “Nepheria” Devine provides both the vocals and whipping! It’s a bouncy tune and has a lighter feel than the original. But you know what? I like it! “Tiki Caliente” means “hot (as in attractive) Tiki” and its use of guiros add to the track’s classic exotica feel with Hawaiian touches. Light drums and cymbals bring us into the mysterious sounding surf guitar work of “From Vine to Vine.” I particularly loved the brief bongo interlude with “native” chattering. “Dance of the Tsetse Fly” is a cute and catchy song, which is pretty impressive given how its subject is a blood drinking fly best known for spreading disease. Fans of Spongebob Squarepants are sure to love this (along with anyone with good taste in music).

“The Lonely Bultaco” has quite the back story to it. In addition to both referencing a type of motorcycle and Herb Alpert’s “The Lonely Bull,” it’s also a cover of a song from Brent Walker’s old band Del Noah and the Mt. Ararat Finks. As for the track itself, it has a great road trip feel. The lack of vocals add to the lonely feel. There’s plenty of reverb and a little exotic percussion thrown in for good measure. It’s longer than the original, which had a heavier feel, but I like them both. Although I do miss the saxophone work somewhat, it would have admittedly clashed with the percussion. The organ-based opening of “Yummy Yummy Rummy Rummy” sets the tone for a jaunty song about drinking rum. Oh, did I mention the song is sung from the point of view from a kid who’s sneaking his parents rum and sharing it with his friends? “Room Crawl” asks why should you go all over the city on a bar crawl when you can go from neighbor to neighbor’s apartment to try each tenant’s specialty drink? I love the descriptions of the fictional drinks and their serving settings, especially due to the numerous amounts of freaky stuff. “Rum Snob” has an opening based on “The Streets of Cairo,” although we knew it under a different name as kids. Great great guitars and percussion back the vocals of a man throwing a party with only finest specialty rum. The instrumental track “Congo Glide” has a wonderful “oddball Hawaiian” feel. In addition to the soft triangle and steel guitar, there’s a healthy dose of sci-fi “woo” noises! “Mooka Mooka Island” is a soft and soothing song about a tropical romantic paradise. Bongo beats and touches of humor abound, along with some excellent steel guitar work. “Cat Nap” mixes a soft triangle and guitars with the sounds of crickets, birds and a sleeping, growling cat. As as the case in many old school exotica works, the some of the animal noises (the cat’s) are done by a human performer. It’s delightfully goofy and always brings a smile to my face. Even if I heard this without seeing the artist’s name, I’d know it was a Dingo Dong Devils ditty.

Just like their last album, this is pressed onto a glass-mastered CD to ensure the highest quality. Artist Derek Yaniger has once again provided the cover art and has even done work for Tiki Oasis. Why do I bring this up? Because the Ding Dong Devils will be debuting their third album at this year’s Tiki Oasis! It’s an outer space-themed album called Space Fezcapade and attendants of the event will be able to snag a copy long before its general release in September. Judging from how well their last two releases have turned out, I’m confident the new album will be just as amazing.

Bad Behavior has blocked 955 access attempts in the last 7 days.