Music to Haunt By: The Dark Tower 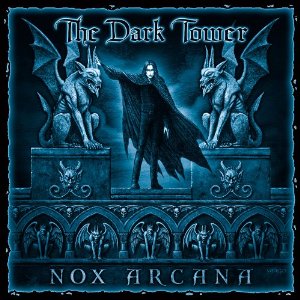 What can I say about Nox Arcana that hasn’t already been said since I last reviewed them in “Music to Haunt By?” Well, this is the second time I’ve reviewed them for this series (unless you count the band members’ participation in Buzz Works as Nox Arcana albums). This is also the first time I’ll be reviewing a Nox Arcana album that’s a literary tie-in, as it’s a companion piece to band founder Joseph Vargo’s anthology Tales From The Dark Tower. The album also marks the return of our old friends, the Gregorian Shadow Choir.

“Darkness Rising” uses tolling bells, soft chanting and string work as a prelude to Vargo’s spooky voice, which speaks of spirits, vampires and gargoyles inhabiting the Dark Tower. If one features an animatronic character to greet patrons of their haunted house, this track would make a fine introduction to any setup based around (or involving) a tower. If one is not available, a simple cardboard facade in front of a door could create a “tower.” “Born of the Night” starts off with pounding noises, violins and snippets of organ work. Female chanting leads to unisex chanting and tolling bells that provide an unrelenting feel. While the title might surprise Midnight Syndicate fans, I should note how Mr. Vargo used to be a member of the band and how the names of his paintings were used as song titles. A heavy intro in “Crimson Thirst” leads to light piano work with touches of string work and bells. The female wordless vocals add to the eerie feel. “Vasaria” has similarly heavy intro that makes it seem like something menacing is approaching. Wailing violins and chanting add to the effect, while the bells provide a touch of elegance. “Vesper Tolls” features tolling bells (of course) and mixed chanting, which make for an effective combination. Said chanting is a mix of low chanting of male with somewhat louder female chants layered on top. “Path of Shadows” has low pounding drums and lurking tone conveyed by the music. Light violins contrast with the percussion, organs and chanting. It’s perfect for any haunted hall, trail or haunted forest scene. In “Banshee,” wolves howl, ravens caw and we gradually become aware of a low moaning chant by a woman that increases in volume. A female spirit tells of both the animals and power of the banshee’s cry. This could definitely work with a banshee scene or even a hooded ghost, especially if you have a “museum of the weird” setup. “Ghost at the Gate” features great piano work and groaning effects. Said effects give way to distant tolling bells and ethereal female chanting. As you can imagine, it’s great for a ghost scene, especially one using a flying crank ghost.

“Nightwatcher” features scary organ music (not the usual “Toccata and Fugue in D Minor”), along with the occasional pounding percussion and distant chanting. Whether it involves a still prop, animatronics or a live actor, this goes great with a phantom organist scene. “The Dark Tower” features a spoken intro that uses the infamous “abandon hope” quote, which makes it a good introduction for a haunt or an entrance to a tomb or crypt scene. There’s also chanting in background, which soon takes center stage. The feel of sinister forces at work is aided by the pounding drums and Latin chanting. “Haunted” uses thunder, soft cries, chanting and a harpsichord to conjure up sense of antiquity. The chimes take on an almost music box-like tone at one point, which give this haunted nursery potential. The frantic string work bells and chanting excellent piano solo in “Vampire’s Kiss” are soon followed by bells. The female chanting takes center stage, but the organ work is nothing to sneer at. Soft piano work grows in terms of both intensity and volume in “Undying Love.” There are music box-like chimes at points, along with some bells and chanting. This would work perfectly in a vampiress or haunted woman’s room scene. “Masque of Sorrow” has powerful intro with chanting and organ work. Violins come into play later, as do bells. “King of Fools” starts with a soft plinking piano solo, but soft chanting slowly works its way in. Chimes and bells follow later. If you have a scene featuring a spooky throne with a (un)dead king in it, you need to use this track. Moaning wind opens the very short “Something Wicked,” which leads to thunder and sinister female’s (witch?) voice recites the poem from the liner notes. Said poem is inspired by (and not from) Ray Bradbury’s 1962 classic Something Wicked This Way Comes. Ravens’ cawing joins distant moans in “Sinister Forces.” Female chanting and organ work give way to pounding violins. It’s almost playful in tone, which means you could get away with using in a haunted circus setup. The soft and fast plinking tones in “Immortal Fire” soon gave way to something heavier, along with plenty of female chanting. “Sorrow’s End” opens with soft piano work that leads to soft female chanting. “Dark Desire” conveys a sense of dark elegance or regality using soft, speedy plinking tones, tolling bells and chanting. Once the heavy piano appears, it never lets up. “Noctem Aeternus” means “eternal night,” and the chanting and organ start immediately. The bells and increased chanting add to the feeling of darkness. Those who wait patiently will be reward with a few short bonus tracks. The first consist of whispers of things like “We are watching you,” which would go well in a “face room” or in a haunted yard display involving staring faces and glowing eye effects. If you wait some more, a spooky intro and violins create a pounding theme with plenty of chanting and bells.

While somewhat talkier than your average Nox Arcana album, it’s still chock-full of the scary musical excellence that Nox Arcana is known for. So whether it’s for home haunting, Halloween displays or just some musically accompaniment to Tales From The Dark Tower, you definitely want to pick up this album.