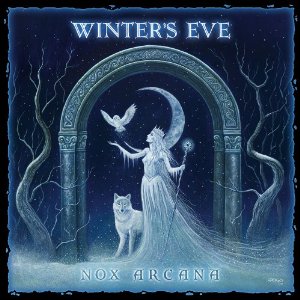 Winter can be a time of both wonder and woe. While the falling of snow delights many, other look upon it with dread. The gray skies of daytime, coupled with the bare branches of trees looking like grasping hands rising from a grave and longer hours of darkness, make for a dreary mood. The howling winds don’t help, either. But in spite of that, there is beauty in the drifting flakes and virgin snow blanketing everything, with icicles glittering like crystals. Noting both sides of the season, Nox Arcana has released two winter-themed albums, Winter’s Knight and the CD I’ll be reviewing today, Winter’s Eve. All performers save for Michelle Belanger have returned for the sequel, as you’ll soon see…

“The Messenger” uses chanting male vocals to start off both the album and this intro track, wherein the voice of the White Queen (played by Christine Filipak) tells of a magical winter season. “Frozen Memories” evokes a nostalgic feeling through tolling bells and light touches that remind me of ice crystals. The medium piano and light chimes of “Magic and Moonlight” make me think of nighttime and wonder, with a pinch of magic. Some aspects of this also remind me of The Nutcracker. String work defines both “The Rose of Winter” and “Enchanted Realm,” although that last one is heavier and has more light touches. “The Ides of December” uses a speedy, heavy piano along with female vocals and magic-sounding light touches. It becomes hauntingly beautiful at the times it slows in both speed and tone. The name “Gifts of the Magi” makes me think of both the three wise men and the story by O. Henry, although the Middle Eastern drums and percussion make the inspiration for the song clear. “Season of Wonder” uses a piano, along with light touches and female vocals to create a dreamy feel. The string and ye olde tambourine work of “Solstice Dance” conjures up images of a medieval ball.

Piano vocals and merge together in “The White Queen,” giving this track about the cover’s snow queen a feeling of beauty and regality. The titular track “Winter’s Eve” marks the return of Jeff Endemann, who is backed by a harpsichord and female vocals. His singing tells of enchanted kingdom that appears in Ebonshire forest during the winter. Is it an actual magic kingdom or a metaphor for the beauty of a forest in the winter? Knowing Nox Arcana, it’s probably both. “Starlight Serenade” brings the night into mind, nicely alternating male and female vocals over piano work. In the band’s take on “Greensleeves,” the folk standard becomes a harpsichord-based instrumental number accompanied by strings. How is this a Christmas song? Your answer lies here. Although “The Longest Night” suggests the darkness using heavy piano work, the light female vocals and tolling bells suggest a sense of peace as well. The Gregorian Shadow Choir shines in
“Pax Terra,” which translates as “Peace on Earth.” Although their work in the last album could be made to seem scary, this can’t. “Winds of Change” initially utilizes a harpsichord to provide a feeling of antiquity before letting other instruments creep in (perhaps signifying change). The light, slow piano work of “Fading Embers” will assuredly bring to mind a dying fire in the hearth at a party or waiting for St. Nicholas to arrive. As the name suggests, “Crystal Chimes” uses light chimes, along with distant tolling bells and vocals that go well with the winter fantasy theme. The peaceful and festive “Serenity” is a great piece of medieval-sounding music. “Winter Rhapsody” uses a medium piano and heavy touches to evoke the alternating beauty and fury of winter weather. The piano and musicbox-like chimes of “Time Slips Away” remind me of the distant memories of childhood, which the winter weather seems to bring out in all of us at times. Those who patiently wait will get a hidden bonus, which includes more musicbox-like chimes and wintery wind.

As usual, the liner notes for Winter’s Eve are jam-packed with lyrics and beautiful illustrations, along with a puzzle to decipher. While Winter’s Knight had a darker feel, I think Winter’s Eve is more accessible to general audiences due to its focusing on memories and magic and is thus perfect for playing in full at holiday parties. That said, they are both great CDs and I’m looking forward to the third winter-themed album that’s currently in the works…