Music to Haunt By: Buzz Works 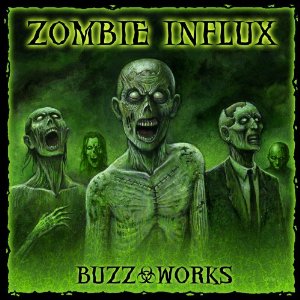 If you read yesterday’s installment about Nox Arcana, you might remember how I teased about another new release of sorts from them. That’s due to their involvement with Buzz Works…

Buzz Works’ origins lie in an Ohio-based store of the same name that’s devoted to all kinds of spooky decor and merchandise. Although established in 1997, it wasn’t until relatively recent times that founder Jeff Hartz decided to start a music project under the same name. Teaming up with Joseph Vargo of Nox Arcana to fill out the group’s ranks, Zombie Influx was their first release in 2009.

Although William Piotrowski did handle the engineering duties, only Hartz and Vargo shared the songwriting and performing duties (while Hartz also wrote the dialogue and provided the vocals). This isn’t merely a Nox Arcana album under a different name, although there are some of their trademark touches in it. There are, however no bonus tracks or opening narration that are standard in Nox Arcana albums. As a special treat, the liner notes contain the text used in the broadcasts scattered throughout the disc and pictures of Rich Klink’s awesome zombie sculptures (which are also used on the disc art).

“Ground Zero” starts things off with a kinda dreamy synth opening, but its later tone, drums and a variety of sounds of zombies make this more of a nightmare. There are some lighter touches with little to no zombies, but track still creepy. The title of “Satellite Radiation” comes from the theorized cause of the dead rising in Night of the Living Dead and the use of beeping satellite noises that go in and out of the music (and other technological sounds) both reflects that and goes well with the drums and synthesizer work. In “Defcon Six,” a crackling broadcast tells of the raised danger level due to a virus and provides instructions on what to do. “Creeping Death” uses slow and creepy heavy synth work and other spooky touches to great effect. These include occasional female vocals, a vaguely tribal drums effect and a zombie groan. “Echoes of the Living” has lots of eerie synth work with lots of twists and turns, along with some light guitar and an almost bubbling-like sound. “Doomsday” is aptly named thanks to its heavy, pounding drums and bells. Light vocals and increasing piano use adds to the exciting, but hopeless, feel.

“The Feeding” opens with an odd horn effect, heavy synth open and other creepy touches (such as a heartbeat-like drum). I can imagine a few scattered zombies creeping out to a source of food, which in turn attracts more and more of the undead. Perhaps that’s why we hear machine guns at the end. “Warning Signs” is a short broadcast (with brief synth work) about the signs of infection. “The Dawn” is clearly a reference to Dawn of the Dead. The use of low zombie effects under synth work is very unnerving and somewhat otherworldly. “Dead Run” uses bells, pounding synth and fast, frantic piano work to create the effect of running in a panic. Light synth work and what seems to be thunder effects kick off “Post Mortem,” which are soon joined wailing vocals (or are they notes?) and a slow, soft guitar that eventually fades away before the zombie groans enter the picture. “The Panic Spreads” blares a short siren before a broadcast usual broadcast about the zombies overwhelming defense forces. The comparison to the gates of hell opening is definitely a reference to the tagline for Dawn of the Dead or possibly even a reference to the alternate title for this film.

Speaking of which, “Transmutation” uses light, but pounding, synth, bells, guitar and heavy piano work to create something that reminds me of Dawn of the Dead. to some degree (especially the drum effects). “The Pain of Dying” is also a reference, this time to a line from Return of the Living Dead. Light, dreamy music and some crackling gives way to slams wailing notes and scary synth work. The fast-paced percussion and bells that open for “Armageddon” helps build a sense of dread and hopelessness. Some organ and keyboard work give this an 80’s horror-style feel that only lets up to the sounds of jets soaring and bomb blasts. “Dead Life” uses strange, disturbing synth music and vocals that I can’t place (and which brings strange life forms to mind). I can see this track working in an alien-based scene as well as a zombie-based one. “Flesh Eaters” could refer to a wide variety of zombie movies, including the original title intended for Night of the Living Dead. A guitar and slow, low sirens blare as a hoard of zombies is heard. Said hoard is eventually overwhelm guitars and other musical touches for awhile. A snippet of the earlier news report on zombies plays later, as do odd synth effects that seem out of place to me. “Ravenous” mixes a fast piano with drums, electric guitar, synth hand claps, bells, harpsichord and samples from previous bulletins mixed in. The titular “Zombie Influx” uses creepy opening music and mournful strings with samples of a man talking about his dead wife and seeing things in the nearby woods. One part seems to imply that he’s the cause of this. News bulletin samples and what seem to be samples from Night of the Living Dead play us out over synth work.

A few minor quibbles over some of the sound effect choices aside, Zombie Influx is an amazing album that makes the listener feel like they’re inside an 80’s zombie epic. The majority of tracks are loop-friendly and the album played in its entirety will compliment any zombie-based setup. In fact, some people were so taken by it that they started a haunted house in Sweetwater, Tennessee based on it (and using it as a soundtrack) called “Defcon 6.” As for Buzz Works, they’ve recently unleashed their second album, House of Nightmares. If it’s anything like Zombie Influx, then we’re in for a treat.