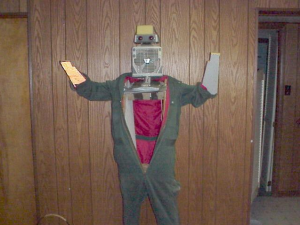 For a long time, the only ways one was told to use an oscillating fan in a haunted house was to either use a hidden one as a source of wind (either blowing on fabric props-such as curtains or ghosts-or directly on the customers) or as a way of making an empty rocking chair seemingly move on its own. But all that changed in 1997. That’s when Michael Bruner created a full-sized animatronic werewolf using an oscillating fan motor. Inspired by its success, he created a fanimatronic version of Freddy Kreuger and used a stripped-down version placed in a barrel to create a moving Alien in later years. He even discovered that covering an oscillating fan with a “Hanging Ghost”-style prop can create a quick and easy animatronic figure.

Once the directions were posted online, the idea quickly spread among other Halloween enthusiasts. Noting how using an oscillating fan created props that seemed to be shaking their heads led to some creating “No No Ghosts” in order to provide an interesting way of blocking off areas guests aren’t supposed to enter. Others adapted it into an inexpensive and easy way of creating a Flying Crank Ghost, the most popular method being known as “Chee Po’s FCG.” Other variations include reaching hands from a ceiling and moving shadows. I can even see someone combining it with figures possessing arms that move. Since one could use a hidden oscillating fan to move spiders and lightweight props on strings attached to the fan’s cage, some even hit upon the idea of using a fanimatronic prop in on room to move something in the next! For those who want their fanimatronic to have glowing eyes, using a glow stick or homemade LED eyes should do the trick nicely. Those constructing a hanging ghost-based fanimatronic can opt to use one that already has glowing eyes built into it.

As you may have noticed, many fanimatronics tutorials require you to permanently alter a fan so that it can only be used to provide prop movement. This is done both to allow a mask to fit over the fan and, as noted in this FAQ, to prevent fan motor burnout. However, it is possible to fit a cloth-backed mask over desktop fans. This way, the fan isn’t burdened by as much weight as it would using an over the head latex mask and keeping the fan intact helps keep the motor cool. Being able to reuse the fan during the summer doesn’t hurt, either. Just make sure to use it in a dark area (preferably with black walls) so that the mask’s black cloth backing blends into the background. No matter which method you use, be sure to follow the FAQ’s advice and to also check on your fanimatronic every so often if it isn’t in a room with any performers in it. Happy haunting!

UPDATE: It turns out a kind of fanimatronic was used to promote The Wolf Man back in 1941 and the use of fans to create movements in Halloween displays can be traced back to 1921!

Special thanks to Michael Bruner for use of the image!

Bad Behavior has blocked 1902 access attempts in the last 7 days.