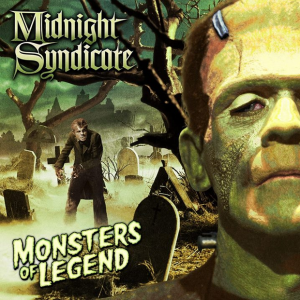 It’s been far too long since I’ve reviewed something by the Midnight Syndicate. Thankfully, my decision to rectify this came when they announced the release of their new album: Monsters of Legend. Although the cover features the titular character from Werewolf of London and Frankenstein’s monster (more specifically, the portrayal from Bride Of Frankenstein-the liner notes have even more classic horror images), the album is more than just a tribute to Universal horror films. It also draws inspiration from various Hammer horror films and other European genre movies, from classics like Nosferatu, The Wicker Man and Black Sunday to lesser known titles like The House that Dripped Blood. On top of that, it’s also a tribute to their musical influences from those old film as they draw inspiration from legendary composers like James Bernard, Bernard Herrmann, Max Steiner and Hans Salter. This is a labor of love from people who clearly know what their stuff. Seriously, only a diehard Euro horror fan would throw a relative obscurity like Horror Hotel in the mix.

But that’s not all! The concept for this release is to draw listeners into a place where the events in such films are real and famous monsters are constantly on the prowl, rather then act as a collection of music devoted to each monster. In this case, they have decided to revisit the fictional realm of Arcacia from their Realm of Shadows album. It’s also worth noting how and the word “Arcacia” first appeared on their self-titled debut album. Strengthening the connection to their older work are newly recorded versions of “Witching Hour,” “Black Woods,” and “Twilight” from Realm of Shadows and “Requiem” and “Dark Tower” from Born of Night. As you would expect, this album is perfect for haunts based around classic monster movies But it also has potential for use in other haunt setups (and I’m not saying that just because industry legend Dick Terhune was involved), as I’ll soon show you.

“Return to Arcacia” kicks things off with the sounds of crickets, wind and a carriage coupled with music. The pianos and classic horror-style stings both set a mournful tone and give this the feel of an opening to a horror movie. The eerie, heartbeat-like musical tones are a great touch, as are the sounds of bats, ghostly wails and a spooky chorus. The stirring, spooky opening of “Into the Valley of Shadows” has a pounding tone and plenty of ghostly musical wails. The string work is excellent and there are plenty of Universal score-style touches, along with some storm effects layered in for good measure. Other effects include crickets various bird calls and a trotting horse…in addition to hints of something else. “A Watchful Gathering” starts with wind chimes (and wind, of course), along with a soft wail and pounding notes that alternate with softer touches. As we hear the carriage, crows and distant tolling bells, the wordless female vocals kick in and a sense of unease grows with the birds. The closing scream is a great touch. “Inn of the Weeping Sparrow” offers wind and chimes again, but also includes soft harpsichord notes that musically convey elegance. Wordless female vocals return, but give way to a great harpsichord solo with soft wind. After some ominous touches a pipe organ joins in for (short-lived) lighter interlude followed by distorted string work. I like how the closing effects bookending the track are a variation of what we hear at the beginning. “Unwanted Visitor” features dark and relentless musical notes, with plenty of gong strikes and “scared”-sounding strings like what you would hear in a horror movie when that one stranger to the inn who accidentally kills the mood. You know, the one who makes everyone gasp when he mentions a family name with a less than stellar reputation? We actually get a reenactment of sorts where a stranger knocks on a door and is told to be on his way, which is followed by whispers and piano work.

Tolling bells and wind effectively open “Requiem,” which are soon followed up footsteps and a door opening. The pipe organ work is beautifully slow and spooky and the whispers are a great touch. Both male and female wordless vocals are heard, along with wind, whispers and more bells (in addition to thunder and soft prayers in Latin). This would work perfectly in a haunt’s funeral parlor scene. The use of soft, steady piano work and menacing strings in “Witching Hour” sound vaguely like the opening to Beetlejuice if it was a serious horror film rather than a comedy. It later offers a sense of urgency or pursuit that could allow this to be used in a slasher room. There’s also amazing violins work on display and the chiming tones used to great effect. I was actually disappointed when I heard the crickets signaling its end; it really is that good! “Unexpected Cargo,” inspired by a legendary scene in Nosferatu, has a moody opening buildup which creates a sense of dread. The creaking crate and wind effect could allow this to be used in a pirate scene, a room full of coffins or a Monster in a Box. The ghostly backing calls are a wonderful touch and the ending buildup has lots of callbacks to classic horror scores. “Black Woods” has a big, loud opening that reminds me of classic Midnight Syndicate tracks. There’s a pounding sense of urgency to the music and both string and howling get a real workout. This would go great with a haunt scene involving a werewolf, wolf chase or haunted forest. Despite the name, “Twilight” has nothing to do with sparkling vampires. The soft and unnerving opening leads to exotic, mournful music and what appears to be a woman singing. This could be used with female ghost display using a Pepper’s Ghost effect and the children’s chorus and light musical tones also make it useful with a haunted nursery scene. “Carriage Ride” was one of the first tracks composed for the album and is a homage to both Universal’s Dracula and numerous Hammer horror films. The James Bernard influence is very strong here. The sounds of a carriage and horses carry us off to clacking noise and dark tones. Tolling bells usher in spooky music and wordless male vocals, and increases in intensity as time goes on.

“Stone Guardians” has a soft, pounding open aided by squeaking bats and wordless male vocals. In addition to the pipe organ, there’s Universal-style touches (such as the use of gongs) and sense of lurking at times. Given the sounds of both bells and bats, it’s a neat surprise they didn’t go with the obvious name “Bats in the Belfry.” Being a mere 23 seconds, “Ancient Portal” is the album’s shortest track. Said track features an opening door, clanking and spooky music. “Dark Tower” is another deliciously ominous track. There’s a sense of plodding menace coupled with great string work, along with whispers and male chanting that bring drudgery and dark deeds to mind. The classic horror horn touches are especially well-done. The powerful Universal-style opening of “Building the Monster” sets tone for rest of track, but includes some touches of older Midnight Syndicate works as well. While the music is epic in tone, the sound effects are the real star here. Even without narration, you can tell Dr. Frankenstein has entered his lab and activated his equipment in order to bring the monster to life. Naturally this best fits a mad scientist’s lab, especially one featuring you-know-who. “Lord of the Realm” features uneasy strings and drums the create a light, music box-like feel. It’s kind of like the Twilight Zone theme at one point, but for most of the time it has the feeling of a chase to it. “Forgotten Alcoves” offers light alternating musical tones, clanking chains and a sliding stone slab in its 42 second running time. “A Terror Unleashed” has an old school Midnight Syndicate feel and amazing strong work. The wordless vocals and beating heart add to the feel of terror and fear. It’s like you know something bad is loose. There’s also odd mad science-y tones at end, so this can be used with more than one type of scene. The rumbling open of “Cloistered Cemetery” brings in tolling bells and male chanting, along the harpsichord takes over for a lighter moment. This could easily fit a graveyard or crypt scene. “It Lives!” has a fantastic trumpet-heavy opening which reminds me of Bernard Hermann’s work on various Hitchcock films. Gongs and interesting string work signal in breaking glass and destruction and the soft wind implies something has left. “Beyond the Veil of Time” closes the album out and has a lot to offer. There’s a very spooky opening and it is loud at first, but has constant light touches. The strings and occasional gong, coupled with wordless unisex vocals and plenty of bats, conjure up a pounding sense of menace.

All in all, Monsters of Legend is a beautiful musical tribute that all horror fans should own. Save for “Ancient Portal” and “Forgotten Alcove” (which are better suited for use with a motion sensor), the majority of the tracks are quite loopable. The numerous effects might be tricky to match up with certain setups, but that’s nothing a little creativity can’t resolve. When you get right down to it, these films are so deeply embedded in our cultural consciousness that they can can be played on Halloween even if your house’s decor doesn’t always match up to the sound effects. That said, adding a little horror movie-style fog to the mix never hurts! Owners of professional haunted attractions featuring classic monsters should especially appreciate how this (and all other Midnight Syndicate albums) is included in the group’s royalty free registration program. Even more thrilling is the news of there being a second album in the works that will reference more classic horror icons. I don’t know about you, but I can’t wait!