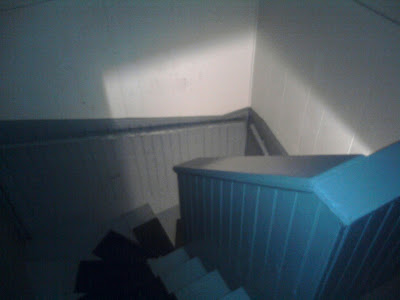 When I think to myself “I better go down to the basement. I have two that I need to take the knives to, today,” I realize it’s thoughts like those are why I wouldn’t be a good schoolteacher, but a great one. 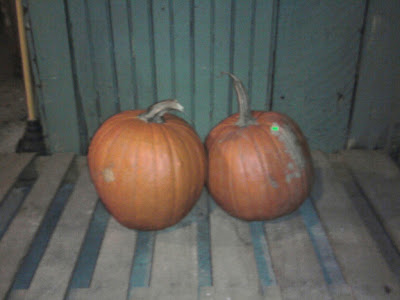 The two pumpkins I secured over a week ago had held up, thanks to a tip from the forums over at www.zombiepumpkins.com. Keeping them cool but not too cool is advised, so instead of having them deflate in my apartment, I stored them down in the basement.

As you can see, they’re frightened. You would be too if some strange guy kept you underground for ten days. Thankfully, I was able to hypnotize the one on the left. The other one developed Stockholm Syndrome and was eager to go. 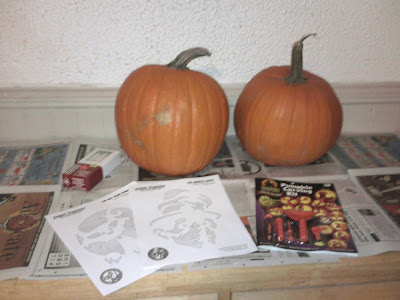 The history of the Jack O’Lantern is that some dude who could head not to heaven nor to hell decided to wander the earth with a hollowed out turnip as a lantern. Being that turnips are small and gross, I think we’ve made the right decision to upgrade. As you can see, I have the cheap four-dollar pumpkin kit that features two blades, a scoop, a pounce wheel and a ‘drill.’ The last two would break during use, having me sing out ‘CHEEEAAAAP PLASTIC’ in a mocking fashion. 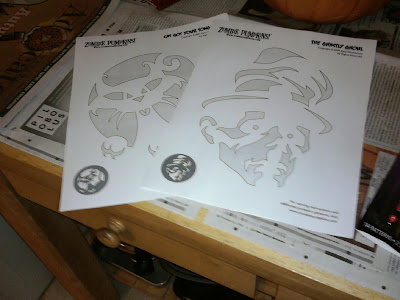 I chose The Ghastly Ghoul because, as noted before on this site, I first got into surf (and spooky) music thanks to The Ghastly Ones. When Patchmaster General Ryan revealed the 2010 Ghastly Ghoul pattern, I knew I had to do it. The cat is done in favor of my own, Jack. He’s a black cat so by nature, this holiday is for him but I don’t think he grasps the concept of Halloween and, to be honest, who does anymore? I figure that I might as well throw out some props to him so maybe he won’t wake me up in the middle of the night anymore. 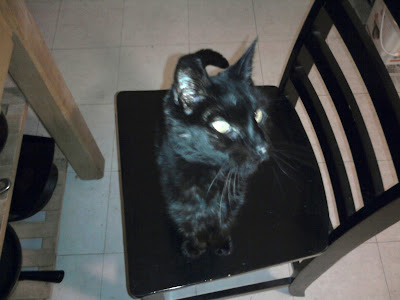 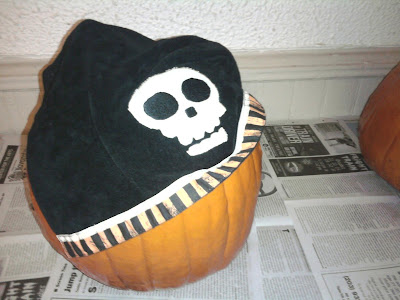 Cleaned off any dust and dirt that might be on the pumpkins. Here we see my handtowl, which I have named Skully, doing his work. Doing a bang up job there, Skully. 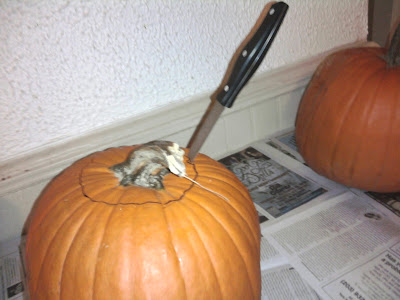 You don’t really want to use a kitchen/steak knife for carving. Even back before there were kits like the one I bought, my family would always use the really thin, flexible knife for pumpkin carving. Thick blades don’t work unless you’re whittling. Carving requires thinness. But for the stabbing the hell out of the head like this, steak’em.

You’ll notice the outline I did with a sharpie. Being that I haven’t carved a pumpkin in about two years, I decided to give myself some help. It would come in later when I got the design ready. It leaves a few smudge marks that, in the light, makes your pumpkin look odd. But when it’s dark – who cares? 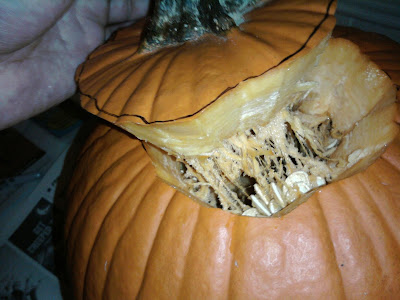 It might have been the pumpkins (I got two for ten bucks from a local grocery store) but the insides were not as sloppy or as gross as I remember. Not as soggy and the seeds were clumped in an organized way, not as random and wild as I remember. But of course, back when I was still too young to vote, drink or operate any kind of fun machinery, life itself was random and wild. 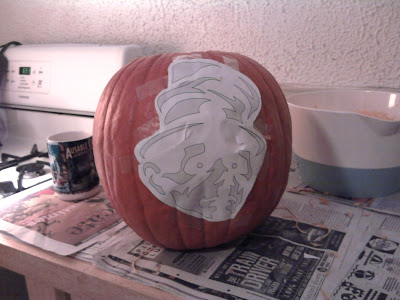 When taping the design to the pumpkin, I had to compromise on which side looked better, the natural sitting-position of the pumpkin and how to place a flat piece of paper against a curved pumpkin. Over at the ZombiePumpkins forum, user St0ney suggested printing the design out on sticker paper. I was hoping to do that this year, since when you eliminate the problem of attaching the design to your pumpkin, there goes one of the biggest problems.

But, I made due. It’ll make my Ghoul look a little stumpy, but hey – he’ll look different. My family, when carving pumpkins, has always enjoyed being original with their creativity. From my Dad’s first whittling of a werewolf to my latter experimentations of Barney the Dinosaur (at the height of both his popularity and the cultural hatred of his saccharine behavior) to Frank Zappa to some obscure web cartoonist, the designs were always different and hand done. One of these days, I’m going to have to follow Patchmaster General Ryan’s example and do some personal creations of my own.

Of course, I can’t draw a picture worth a damn but who says that’ll stop me? 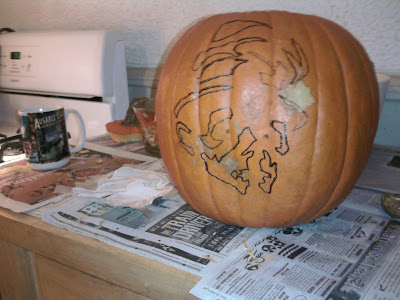 For the next hour or so, I carved away. It was quiet and I had time to focus. Peaceful. I can see why people go all out and decorate their lawns or yards or steps with multiple pumpkins. Just cutting the heck out of these things is a crafty way to focus and feel a bit calm. Maybe I’ll bust out some designs later and just see what I can do. People have used ZombiePumpkin designs for things other than pumpkins or watermelons. Maybe. Maybe. 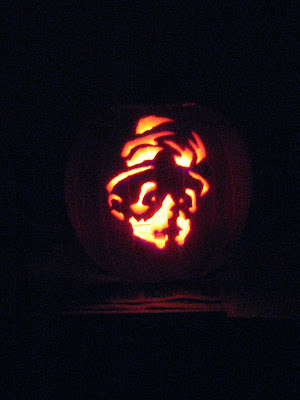 Not too bad. The ear is a little different and I have to get a better candle because that’s why its mouth looks a bit off. But overall, a great design by Ryan and not too bad for a rusty hack like myself. 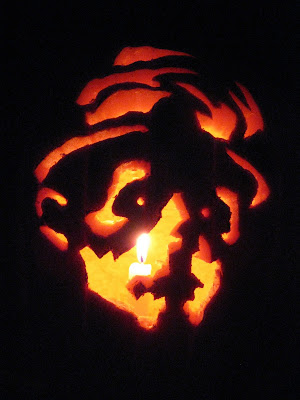 As for the second pumpkin, I felt myself getting tired by the time I was finishing up this one. As you can see, close up, it’s a little rough. Not a lot of smooth cuts. I didn’t want to start a second pumpkin that ultimately ended up chucked. So I decided to torture it.  After having witnessed its friend being gutted and carved up, setting it aside until tomorrow seems traumatic to the thing. On a plus side, what I’ve just done is as entertaining as the last three Saw movies. 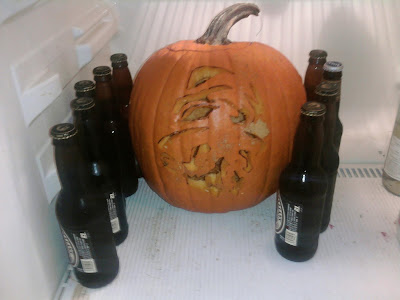 As for our carved friend, I didn’t want to put him back in the basement. So why not have him chill out? Once I get some petroleum jelly, he’ll be able to sit on the windowsill for the rest of the week. Until then, he’s been told not to drink all the beer.