Several stories, in fact. However, some might not be appropriate for readers of all ages. You have been warned…

The Amazon preview for the Cthulhu Unbound anthology contains a full view of Linda L. Donahue’s “Noir-lathotep.” As you’ve probably guessed, it’s a humorous mash-up of the Cthulhu mythos and film noir with enough injokes to appease all but the most uptight fans of each genre.

Speaking of the mythos, Australian sci-fi/horror author David Conyers contributed to the Call of Cthulhu RPG and has written numerous Lovecraftian short stories like “Aftermath,” “The Swelling” and “Black Water.”

I originally discovered The Fright Site in my search for bad movie reviews, but it was the two original horror stories there that really caught my interest. Both Vampire Moon and The E-Leech are unique in that they are presented in an episodic format and are designed to seem like chat room conversations and diary entries, with make for a creepily realistic touch.

But enough modern fare, let’s look at some classics next. First up is Joseph Sheridan Le Fanu’s Carmilla, which inspired countless Hammer movies about lesbian vampires. 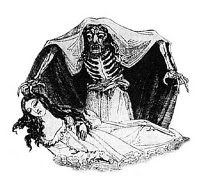 Like Carmilla, the penny dreadful Varney the Vampire is a vampire tale that predates (and influenced) Bram Stoker’s Dracula. It also (allegedly) introduced the conventions of the “tragic vampire tormented by his cravings” and vampires having fangs to horror fiction.

Speaking of Stoker, Dracula. was not his only foray into the world of horror. Ones of his other scary stories is Lair of the White Worm, the inspiration for the classic 80’s horror film of the same name. Fans of the film will undoubtedly be surprised at how different the original story is compared to the film. I actually think it’s better that the film was a loose adaptation, as the source material isn’t up to the standards of Dracula and is very politically incorrect.

William Hope Hodgson is one of my favorite horror authors, second only to Lovecraft in my mind. That links offers from his strange tales of the high seas to the adventures of the supernatural investigator Carnacki and his electric pentacle. I personally recommend The House on the Borderland, The Boats of the Glen Carrig (which is strikingly similar to The Lost Continent by Hammer Films) and “The Voice in the Night,” best known as the inspiration for the legendary Attack of the Mushroom People.

Strange Jason has sung the praises of Algernon Blackwood and I think you’ll understand why after reading tales like The Wendigo The Damned and The Willows (among others).

Did you know that The Phantom of the Opera was originally a serialized story by Gaston Leroux? Now you do!

And if you want even more tales of terror, please visit:

Bad Behavior has blocked 804 access attempts in the last 7 days.