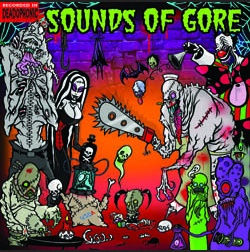 Like many Halloween enthusiasts, I’ve drooled over the high quality costumes and props offered by Gore Galore for quite some time. But it seems that I spent a little too much time admiring their props, as it wasn’t until late last year that I discovered they also had their own line of sound effects CDs. I’m not talking about a mere handful of your standard “one effect per track” CDs either; Gore Galore has well over a dozen volumes, each featuring an hour long soundscape devoted to a particular theme. For those interested in said soundscapes but not able to afford purchasing them all to see if said soundscapes suit their setup’s needs, they even have a special sampler CD of the first 15 volumes. Each track on the album is a 5 minute segment from each volume. I think we can all agree that’s more than enough listening time to help you make up your mind, along with being long enough to test the tracks in your haunt to see how well visitors react to them. Due to it being released before the creation of volume 16, there is no sample from Dark Apocalypse on the album.

Things kick off with “Meat Locker,” which features lots of buzzing flies and clanking chains. You can tell right off the bat that these aren’t merely the same two clips looped over and over again, as there’s plenty of variation. Sometimes there are lots of flies and a few chains and at other times it’s the exact opposite. There’s also segments with equal amounts of both. It’s perfect for meat lockers, scenes with body parts dangling from chains and, as Gore Galore suggests, a Hellraiser-themed room. “Industrial Terror” has even more variety than the preceding track thanks to its electrical zaps, clanging metal, warning buzzers and numerous power tools being used in the distance. As you can easily imagine, it’s great for haunted factories and chain mazes. “Spectral Nightmare” mixes the sounds of wind and ghostly moans. It’s softer than you’d think, but does offer interesting differences in ghost noises. In fact, some of the cries sound vaguely electrical at times. I do like how some of the ghostly wails go from one speaker to the other at times. While not perfect, it’s a good soundscape to use with a Flying Crank Ghost or any other scene involving ghosts. Playing it in a dark maze or hallway also suits this track. No matter what scene you use it with, be sure to play it softly rather than crank up the volume. “The Cave” features lots of dripping and gusts of wind (which actually sound more intense than the effects in the last track), in addition to both distant growls and screams. The occasional swarm of screeching bats is a great touch. I was amused to hear a bellowing alligator mixed in with the monster effects, but this might not be an issue if most of your clientele isn’t familiar with gators or if your cave scene actually has one in it. Don’t laugh, the original haunted house ride at Quassy Amusement Park used to feature an alligator in a cave. In addition to crickets, crows and tolling bells, “Cemetary of Unrest” also features some gravedigging, ghostly moans and even the occasional zombie. “Sanitarium” has plenty of laughing, moaning, cackling and screams from both genders, along with chains clanking, wheeling gurneys and various metal on metal noises. Some of the laughs sound fairly clownish, so you could get away with using this in a circus scene as well.

“Angry Skies” is an interesting case. The full CD release offers two 30 minute tracks, one with thunder and rain and the other with just thunder. The sample here is taken from the track with additional rain effects. In fact, the only thing you hear at first is the sounds of falling rain. Quick bursts of thunder come in later on and the rumbling thunder and howling wind start much later than I expected. I do like how the effects get louder and more intense as time goes on. Sadly, there were some very violent storms in the area prior to my listening to this album, so it’s hard for me to judge this track on its own without comparing it to them. “The Laboratory” has lots of beeping equipment, sparking electrical effects and bubbling beakers. There’s a lot of variety to the effects and this is easily the best soundscape for a mad scientist’s laboratory that I’ve ever heard. “Night Creatures” starts off with crickets, but soon moves on to creatures growling. Some of said creatures are specially-made cries of “monsters” while others are genuine nature sounds (wolves, mountain lions, boars and even an alligator). All of these cries appear together and aren’t separate tracks of individual effects. This would work well in a haunted forest or spooky zoo full of monsters trying to escape from their cages. “Play Time” makes great use of both distorted music and the sounds of children (laughing, crying, etc.). There’s also some orchestral stings and growls for additional effect. It’s suitable for use in a standard haunted nursery or kids’ room, but I think it works even better in one that incorporates the Boogeyman in some way. Especially if the Boogeyman surprises people using this window trick. Another creepy trick would be to slowly fade up on the effects when guests enter a room and then fade it back to silence after awhile. Perhaps in a room full of creepy dolls?

“Pig Pit” is actually much eerier than you’d think; there’s just something about how all of the squealing and snorts ebbs and flows. It also has a surprising amount of uses in a haunt. It goes well with the surprisingly common “pig man butchering people” concept, in addition to using it in a regular haunted farm (or barn) scene with the volume turned down either to imply the pigs are out of view or that these are the ghostly squeals of slaughtered hogs. That said, a dead pig prop wouldn’t hurt either. “Demonic Whispers” is especially unnerving thanks to Gore Galore’s masterful use of stereo effects, which makes the numerous voices seem like they’re all around you. Using multiple hidden speakers in any room utilizing this track also adds to the effect. Said whispers are a mix of normal and demonic voices, with the occasional coherent snippet or growl. In addition to the suggestions given here, this track works great in a dark maze. “Zombie Attack” has lots of groaning, footsteps and gurgling…or is it people getting their throats torn out? You decide! This would be perfect for a room with boarded up windows and zombies trying to get in, as would using it in a hallway set up like this one (with a live actor hidden among the dummies, of course). The swarms of scuttling, chirping insects in “Creepy Crawlies” are creepy enough as it is, but the loud squeal-cries of a presumably larger specimen makes things even better. It’s perfect for a bug room or giant spider scene. Finally, “Circus of Freaks” uses an interesting combination of a merry-go-round on verge of breaking down (with distorted music and various sounds of a machine breaking down) coupled with creepy clown laughter and some crying. 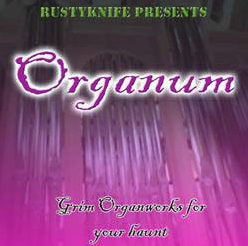 It should be noted how all of the albums sampled in the CD I’m discussing were collaborations with Jason Reece of Rusty Knife Haunt Soundtracks! Since Gore Galore also sells his standalone albums on their website, I thought I’d take a look at his work as well. Organum features nothing but pipe organ music and each track is quite lengthy (the shortest one is “only” about 4 minutes), which makes looping of both the album and individual tracks more than possible. Like the Sounds of Gore Compilation, this album makes great use of stereo effects. The opening track, “Dirge” has a somewhat medieval feel to it, which means it can be used in rooms involving a haunted castle in addition to the usual funeral and phantom organist scenes. As “Spectre’s Ball” demonstrates, each track nicely flows into one another. It’s both similar to the last track and yet has a livelier, unique feel to it. It would go perfect in a haunted ballroom. “Baroque” definitely lives up to the standard that its name suggests while “Dismay” starts out somewhat darker than the other tracks, but gets livelier and more medieval as time goes on. “Lost Love” conjures up a sense of loss and I was quite taken with how the melody builds up over and over again in “Hypnoticus” (along with its other interesting variations). “Miserie” reminds me of church organ at times, especially during the numerous instances when a single note is held for an extended period of time. In the final track, “Madman,” the organist seems appropriately “off.” It also sounds vaguely like a carousel, so there’s spooky clown potential here as well.

Given that all the recordings were made using a pipe organ, the tracks have a comparatively lighter feel than the usual “Toccata and Fugue in D Minor”-type music you often hear in phantom organist scenes. This can actually be a big advantage, as using music that’s commonly associated with the Phantom of the Opera creates certain expectations about how such a scene should look. Rather than stifle your creativity, using Organum in your haunt can let it flourish by allowing you to do spooky organist scenes like these. If you’re using a static or animatronic organist, then I recommend only using one looped track per year. That, coupled with changes in the lighting and other details, can make the scene seem different each time. However, if you’re using a live actor as the organist, you should loop entire album so they don’t have to listen to the same track over and over again.

Both of the CDs I’ve covered today offer great variety and multi-channel effects. I was particularly impressed by how the effects seemed to surround or swoop past me in many of the Sounds of Gore Compilation tracks. If the tips I’ve provided weren’t enough for you, Gore Galore’s website also has additional tips on how to use both albums in your haunted attractions. On top of that, they take suggestions for future “Sound of Gore” releases and those who purchase “Sound of Gore” soundscapes should know they are royalty free!

Some might balk at the price of the compilation, given its nature as a CD-R in a cardboard slipcase, but please keep in mind that all Gore Galore releases are on CD-R. On top of that, the sheer length of the samples given in the compilation make it easy for people to just buy the sampler instead of buying multiple albums, so something had to give somewhere. If you really want the full experience, you should definitely spring for the full versions of the “Sounds of Gore” tracks that best suit your needs; you won’t regret it!

UPDATE: As of 2014, all Sounds of Gore and Rusty Knife releases are only available as digital downloads. They are still available under Gore Galore royalty free haunt music program as well. Those albums, along with releases from other artists (whose works aren’t covered under the royalty free program) can be found at Gore Galore’s one stop shop for spooky ambient music and effects: Halloween Music Galore.

Special thanks to Gore Galore for the review copies!